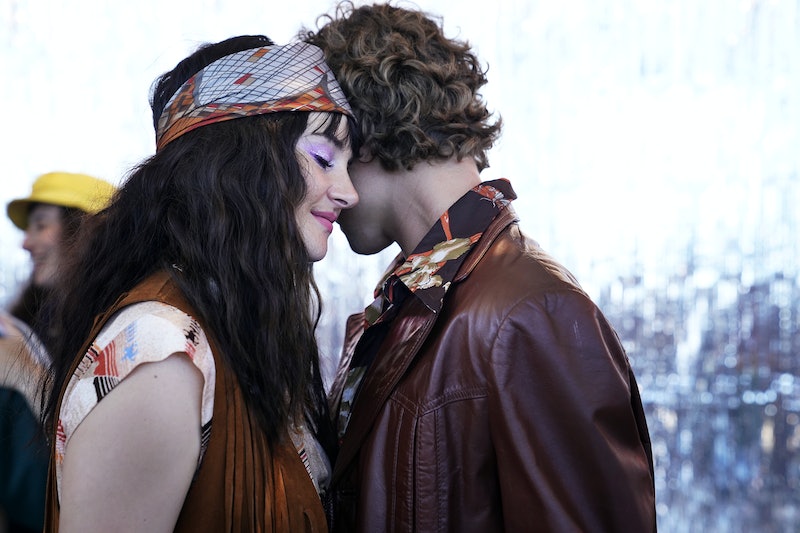 Spoilers ahead for Episode 5 of Big Little Lies Season 2. If anyone deserves a break in Monterey, it's Jane. And with new love interest Corey, it really seemed she was getting one — until Bonnie saw him walk out of the Monterey police station. If Corey is a cop gathering information about the Perry Wright case, then Jane will have yet another betrayal to process, and may be in some legal danger too. Unfortunately, some fans think that's exactly what's going on.

Reddit has a few theories on what Corey could be hiding, but most agree that there's more to Jane's new boyfriend than meets the eye. Part of that may be due to the character's awkward nature: when Corey fumbles his words, it's hard to know if he's just nervous or trying to cover something up. But certain moments have struck viewers as suspicious.

Then there are the actor's own words to consider. When asked by Entertainment Weekly if there was something darker in Corey's history, Douglas Smith didn't exactly deny it. "Anything is possible," he offered vaguely. "We're all these complicated humans that have the propensity for good and bad, and this show is really good at exploring that. And just like any of the other people in this world, you never know."

Here are the clues that Corey could be an undercover cop — or hiding something even more devastating.

He Was Scanning The Room At Amabella's Party

One suspicious moment comes in the middle of "She Knows." When Celeste looks across the room, the scene cuts to Corey appearing to stare back at her — then quickly looking up and away. "He's totally a cop," one Redditor writes, "I've had this theory since episode 1 of season 2, but this moment clinched it for me, how he just looks over at Nicole Kidman's character for a split second then tries to play it off [...] he's scoping out the suspects, trying to get close to Jane so she spills the truth."

Another Redditor points out a moment that cuts from Jane dancing with Corey to a memory of Perry acting similarly with Celeste. That juxtaposition, the theory goes, suggests a parallel between the two characters. "It could be more possible foreshadowing that Jane's love interest isn't someone to trust," the user writes. A commenter agrees: "They're setting up Corey to be an emotional abuser. With the way he treated the waiter, to the way he's extremely warm and open for very little reason...abusers tend to have [Jekyll] and Hyde personalities like we saw last season. The parallels are mounting."

When Jane first mentions Ziggy, Corey's response is exactly what you would hope: "I'd love to meet him." But some fans aren't giving that moment as generous a read, and find Corey's eagerness here an indication that something more is going on. A few Redditors have posited that Corey is Perry's half-brother, since Mary Louise mentions that Perry's father went on to have other children in a second marriage. Corey "chimes in quickly" when she mentions Ziggy, fans suggest, because he wants to meet a relative — not because he's trying to get closer to Jane.

He's Caught Sneaking Out Of The Police Station

Finally, the most damning clue of all: Bonnie sees Corey coming out of the police station late at night, head down, after spending the day kayaking with Jane, Celeste, and the kids. As far as we know, Jane hasn't revealed anything about the night of Perry's death to Corey. But if Corey is a cop, he could be interpreting Jane's assault and subsequent trauma as motive to hurt Perry.

After how hard it's been for Jane to open up and trust again, it would be heartbreaking if Corey was reporting it all back to use as evidence against her. It's possible that Corey was at the police station for an unrelated reason (Monterey's got to have more than one unsolved crime, right?), but that still implies he's keeping a pretty big secret. Even if Corey does have ulterior motives for getting to know Jane better, hopefully seeing her in such a raw state will compel him to treat her with compassion.

In other words: even if Corey is a cop, let's hope his feelings for Jane are genuine.

More like this
Mack & Domynique Reportedly Had An "Epic" Breakup On 'Married At First Sight'
By Brad Witter
These 'Bachelor' Spoilers Suggest Christina Mandrell Is The New Villain
By Grace Wehniainen
All The Clues Clint & Gina Aren’t Still Together After 'MAFS' Season 16
By Brad Witter
You Might Want To Rewatch This Key 'On My Block' Scene To Understand 'Freeridge'
By Grace Wehniainen
Get Even More From Bustle — Sign Up For The Newsletter
From hair trends to relationship advice, our daily newsletter has everything you need to sound like a person who’s on TikTok, even if you aren’t.