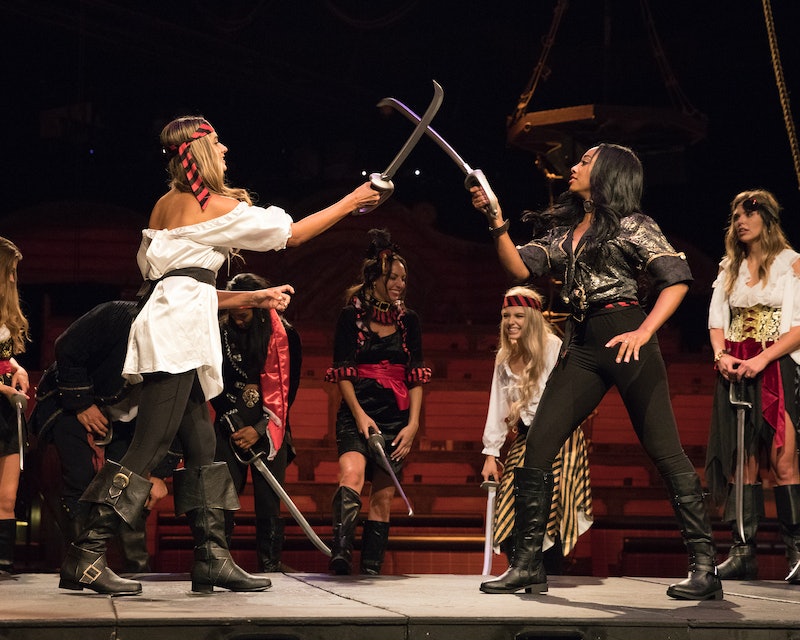 A great way to guesstimate who lasts the longest on The Bachelor is to see what contestant activated her social media first after coming off the show. If she’s posting up a storm when filming is still happening, or if there’s another man in her photos after being on The Bachelor, well, it’s safe to say that she did not get the final rose. It’s a fun way to do some internet sleuthing while The Bachelor whittles down to a point in which we can finally learn some names, finally care about the few contestants that are left (they all blend together so in the first weeks). Is Courtney Curtis single after The Bachelor? This contestant seems like she’s more focused on her career than spilling the beans about her love life.

We haven’t spent a lot of time with Courtney on The Bachelor just yet — save for that swashbuckling pirate date that was basically Medieval Times, but with pirates — but there has to be more to come. According to her ABC.com profile, Courtney was born in Wiesbaden, Germany, but she grew up in McDonough, Georgia. She has four younger siblings and is passionate about food. She runs her own catering business “crafting healthy meal plans for athletes.” That’s a pretty cool job, and one that would mesh perfectly with Colton, since he obviously prefers not to wear a shirt 87 percent of the time.

A quick trip through Courtney’s social media shows that if she is hanging out with any boyfriends, she’s not sharing. Her Instagram is mostly just pictures of herself (self-promotion is the only point of being on Instagram) and her friends. Nary a boyf or potential boyf to be seen here! Not that there’s anything wrong with that — Courtney is building a brand, and she doesn’t have time for love right now.

Speaking of building a brand, Courtney’s work Instagram, cookingwithcourt_, is nothing but the delicious-looking goodies that she makes for her catering company. Her Instagram even smells good, somehow, because that’s how good this food looks.

Courtney also has her own website, Creating Court, where she runs her style blog and offers her catering and digital marketing services to potential new clients. Forget having a boyfriend — does Courtney have time to even sleep? The website offers “girl boss tips,” style stories, and recipes, and she keeps it updated with plenty of news and photos. One thing is for sure — Courtney certainly has that hustle in order to make it as an entrepreneur. When that big idea hits, this girl is going to be majorly successful.

So for now, it seems like Courtney is single following her time on The Bachelor. If she did end up with Colton, well, I don't see how she has any time to even do promotion with him! It’s hard to give 110 percent to a job and 110 percent to a relationship at the same time (especially on television), so for now, Courtney seems like she is working hard to get herself to a place that she can be proud of. Nothing wrong with that. She’s only 23, and there’s plenty of time for romance later. Taking over the world? Well, you have to start with that as early as possible, and that’s what Courtney has set out to do.