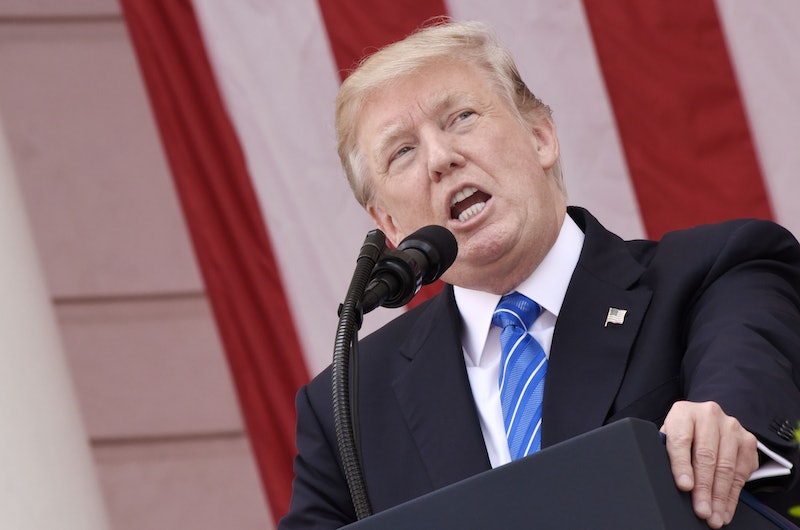 Like many confused Americans (and, I’m presuming, global citizens), I woke up this morning, booted up my computer, looked at the internets, and immediately thought, “…Is ‘covfefe’ a word?” This is not a mystery I anticipated ever pondering; then again, a Trump presidency is not a mystery I anticipated ever pondering, either, and, well, here we are. It was unsurprising, therefore, when I discovered that the “covfefe” mystery and Donald Trump were all tied up together in one baffling, linguistic package; of course the source of the strange and unusual arrangement of letters was Trump himself. Why wouldn’t it be?

It all began shortly after midnight on May 31. (Again, unsurprising; many Twitter-related Trump debacles happen late at night or in the wee hours of the morning.) At 12:06 a.m. ET, the following tweet emerged, pushing its way out of Trump’s Twitter account and into the deep, dark world:

“Despite the constant negative press covfefe.”

The tweet has since been deleted — replaced by something perhaps even stranger (more on that in a moment) — but not before a substantial number of intrepid Twitter users took screenshots for posterity. Indeed, the Tweeple of the universe had ample time to take as many screenshots as they wished; the tweet remained live until roughly 6 a.m., according to The Guardian — which, as we all know, is an eternity in internet time. Here is one such screenshot, which I include so that you, too, may witness the tweet in action, Gentle Readers:

They failed Merriam-Webster, too — which, considering how on point the dictionary’s Twitter account has been throughout the course of Trump’s presidency, is quite impressive:

Which, it occurs to me, is precisely the point, is it not? Perhaps that’s the meaning of “covfefe” — it is the exact moment at which, in the face of something truly baffling, words fail, leaving one grasping at proverbial straws in a possibly futile effort to make sense of the nonsensical. I believe that would make “covfefe” a noun.

Of course, though, I am far from the only person who, in the absence of an existing definition (because, again, “covfefe” is not in fact a word), has attempted to bring order to the chaos. What’s more, we are not doing it at the behest of Trump’s replacement tweet, which encourages readers to “figure out the true meaning of ‘covfefe’”:

We are doing it because nothing else makes sense anymore. This is one small way we can try to exert control over what so frequently seems out of control — so you’d better believe we’re going to give it everything we’ve got.

Here are a few possible definitions of “covfefe,” according to the good people of the internet: