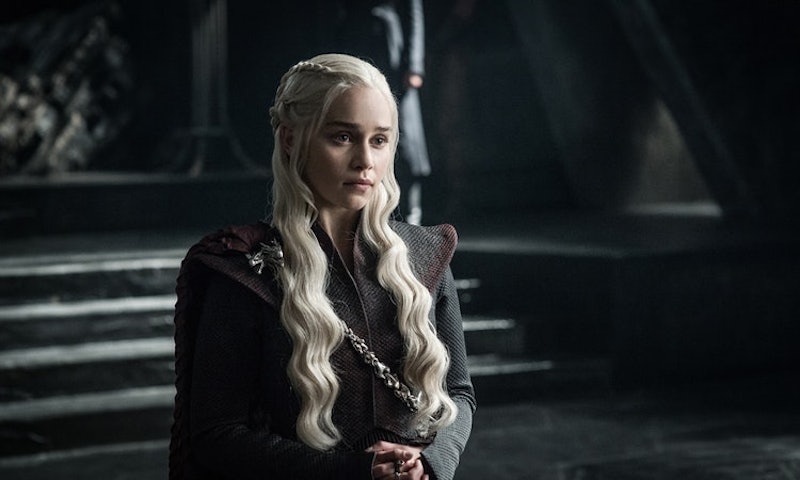 Game of Thrones hasn't always been female friendly. Despite now having a plethora of female characters in positions of power, the show has a problematic history of unnecessary violence towards women. That history is why it's been so rewarding rooting for Daenerys Targaryen to win the game of thrones. Sold into marriage, underestimated, and doubted by every man at every turn, Dany has proven herself a strong and thoughtful leader; one that deserves the iron throne. And if the revelations of the most previous episode can be trusted, Dany might also be the answer the Azor Ahai prophecy, which would give the Game of Thrones series an even more feminist kick.

On Sunday night's episode, the second of Season 7, titled "Stormborn," Dany got an unexpected visitor while plotting out her campaign on Dragonstone: the red priestess Melisandre. It had been a while since we were able to hear Daenerys speak High Valerian, so the conversation between her and Melisandre in the lovely language came as a treat. It was the language, however, or rather an error in translation, that led to the episode's biggest revelation. Melisandre told Dany the story of Azor Ahai, a legendary warrior who saved the world from eternal winter using Lightbringer, a sword made of fire and blood. Legend says that another long winter is threatening to arrive, and with it the return of Azor Ahai, the prince who was promised, to defeat it.

On Sunday night, Melisandre explained to Dany that only the prince who was promised will bring the dawn. Dany smirked and said, "I am not a prince." It was Missandei who then corrected Dany's translation. "That noun has no gender in High Valerian," she said, "so the proper translation for that prophecy would be 'the prince or princess who was promised will bring the dawn.'" So Dany could actually end up being the second coming of Azor Ahai, whose identity has been a hotly debated topic among Game of Thrones fans, both book readers and show watchers.

The idea that Azor Ahai can be a woman is an idea that has never been explored on the show, but it has been mentioned in the books. In A Feast for Crows, the fifth novel of the "Song of Ice and Fire" series, old Maester Aemon, who was revealed to be the last elder Targaryen, had this to say on his death bed:

""No one ever looked for a girl," he said. "It was a prince that was promised, not a princess. Rhaegar, I thought... What fools we were, who thought ourselves so wise! The error crept in from the translation. Dragons are neither male nor female, Barth saw the truth of that, but now one and now the other, as changeable as flame. The language misled us all for a thousand years. Daenerys is the one, born amidst salt and smoke. The dragons prove it." Just talking of her seemed to make him stronger. "I must go to her. I must."

It feels like we've been waiting forever for one of our other favorite heroes, Jon Snow, to be revealed as Azor Ahai. It's been proven that he is of Targaryen lineage, he's been brought back to life, and he's pretty much a literal incarnation of fire and ice. As the series has gone on, it felt like that's where the end game was heading, despite how much fans adored Dany and her dragons. But now that we know that the prophecy can also apply to a woman, Game of Thrones just gave viewers a big twist in possible outcomes, and that fact that Azor Ahai could turn out to be a woman makes the whole show just a bit more female friendly in the long run (though it doesn't necessarily undo the show's at-times problematic treatment of women).

Sunday night's revelation was an important one for the women of the world of Westeros — who have always been relegated to non-power roles by the very rules of the country. Heck, it was momentous for the women of our world, too. After all, we just lived through an election where a competent woman was defeated by a misogynist. But if anything, women have gotten stronger, bolder, and more determined since then. And though Game of Thrones may just be a TV show, art reflects life, and culture is represented through the film, TV, and art. So the possibility that Daenerys could be the savior just as much as Jon Snow is a nice feminist boost that reflects a belief in female equality. Hey, Azor Ahai might still turn out to be Jon Snow. Or it might be both Jon and Dany. But this recent revelation gave Dany what every woman wants: equal opportunity.