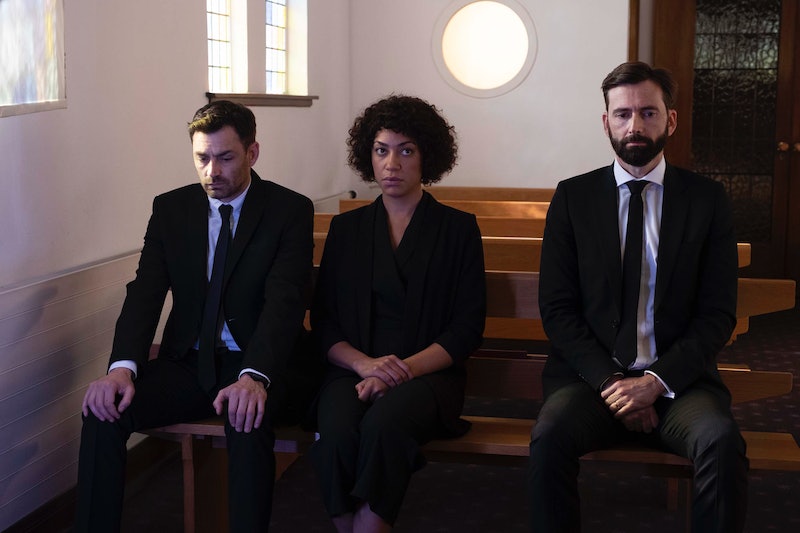 Set in a sleepy Scottish town, Channel 4's latest gripping crime drama tells the story of a local village community who are rocked by a horrific crime. Deadwater Fell centres around the murder of a seemingly perfect family, and is fronted by former Doctor Who star David Tennant. But is Deadwater Fell based on a true story? Here's all you need to know about Channel 4's latest offering.

According to iNews, Deadwater Fell is not based on true events, however, when discussing the origins of the story, writer Daisy Coulam and producer Emma Kingsman-Lloyd did reveal how the series took inspiration from Netflix's The Staircase. Similar to the plot of the Netflix true crime doc, Deadwater Fell focuses on a father accused of murdering his wife and three daughters after they were originally thought to have been killed in accidental circumstances. Speaking to the Scotsman, Kingsman-Lloyd explained how the pair aimed to include a real life crime within a fictional setting, and revealed that their true-crime obsession is what inspired Coulam to create a script with "the forensic detail of a true crime documentary show."

The Channel 4 drama tells the story of a much-loved local GP, known as Tom Kendrick, who resides in a small Scottish village with his wife and three young daughters. However, Tom's world is shattered when his beloved family are killed in a tragic house fire, but when new details about that horrific evening begin to emerge, the unspeakable is brought into question — and the surrounding community soon turn on a man they once trusted.

The mystery's gripping premise is matched by an equally impressive cast, which includes Broadchurch star David Tennant as Tom Kendrick, The Crown's Anna Madeley as Tom's wife, Kate, The Good Wife star Cush Jumbo as family friend Jess, and Cleaning Up's Matthew McNulty as Jess' husband, and local policeman, Steve. As Digital Spy reports, The Good Fight star Jumbo recently opened up about her role in the Channel 4 series, and revealed that she is "so excited" to be involved in this "dark and mysterious story."

Well, with this latest addition to the TV lineup, it seems true-crime fans have another gem to add to their must-watch lists, and you can catch Deadwater Fell on Friday, January 10, at 9 p.m. on Channel 4.

More like this
ITV's 'Maternal' Was Inspired By A Very Simple – & Unanswerable – Question
By Maxine Harrison
Twitter Is Burning As Phoebe Dynevor Reveals Daphne’s 'Bridgerton' Exit
By Sophie McEvoy
Helena Bonham Carter Doesn't Think 'The Crown' “Should Carry On"
By Sam Ramsden
'Happy Valley' Recreated This Moment From S1 In Its Penultimate Episode
By Sophie McEvoy
Get The Very Best Of Bustle/UK
Sign up for Bustle UK's twice-weekly newsletter, featuring the latest must-watch TV, moving personal stories, and expert advice on the hottest viral buys.