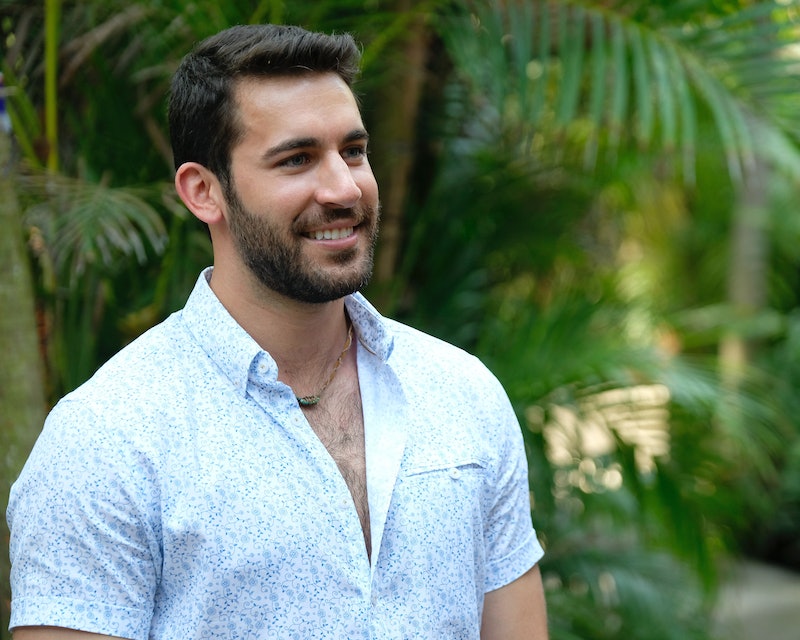 Derek Peth first made his reality television debut way back on JoJo's season of The Bachelorette. Then, he made it all the way to Mexico for a stint on Bachelor In Paradise (where he got engaged to Taylor Nolan), and now, he's back in Paradise again for Season 6. Most recently, fans saw Derek lose Demi Burnett, when she decided that she wanted to be with her girlfriend from home. But there has to be some hope for a man like Derek, no? Handsome, smart, funny, has all his teeth? Bachelor In Paradise has long since stopped filming, but it's really hard to tell if Derek is single after Paradise.

After Bachelor In Paradise Season 4, Derek really had it made — he and Taylor seemed like the perfect match, but their relationship never made it to the altar. About a year after their engagement, they called it quits, saying in a statement that they "put everything [they] could into our relationship and are heartbroken to go forward separately" but that breaking up was the best thing for both of them. "We will still be present in each other's lives with support, admiration and respect for each other," they said.

Distance was one of the killers here — Taylor lives in Seattle and Derek lives in New York — and it just didn't work. It's sad, but it happens. And now, Derek is trying his luck on Paradise Season 6.

Unfortunately, it's really hard to say whether or not Derek came home from Paradise with a new love interest. At first, he had his sights set on Demi, but Demi also had her sights set on her girlfriend from home, Kristian, and opted to bring Kristian on the show to see how it would all work out. Derek was upset, but supportive. But no sign of a new love interest just yet.

Social media is perhaps the easiest way of trying to discern a former Bachelor star's relationship status, because many of them tend to share everything on their channels. Well, that's not really the case with Derek. He keeps his Instagram on lockdown, speaking about his time on the franchise but not actually revealing anything. Of course, all of these contestants have been media trained, but come on — not even a little leak? Derek's snaps are nothing but selfies and pics of his friends. He's cute, but can we get a pic of someone else? Even if he can't exactly reveal... send a hint.

Granted, Bachelor In Paradise isn't exactly a guaranteed way to find love, and Derek said as much in an Instagram post when he was first about to appear on Season 6. "When I was first asked, I didn’t think I was ready to face my many anxieties, especially pain from memories of a relationship I thought was going to last forever," he said. He also spoke about the fact that he didn't want to lose his job for a show like Bachelor In Paradise, which, totes. Work that career, dude. "As you can see...the opportunity for openness won out over the fear," he continued. Can we get a round of handclaps for Derek? Emotional vulnerability is so hot right now (and always).

So, Derek might be single right now, and he might not be single. We're not going to get that info until the final rose showdown. But at least Derek seems ready for whatever comes his way next.