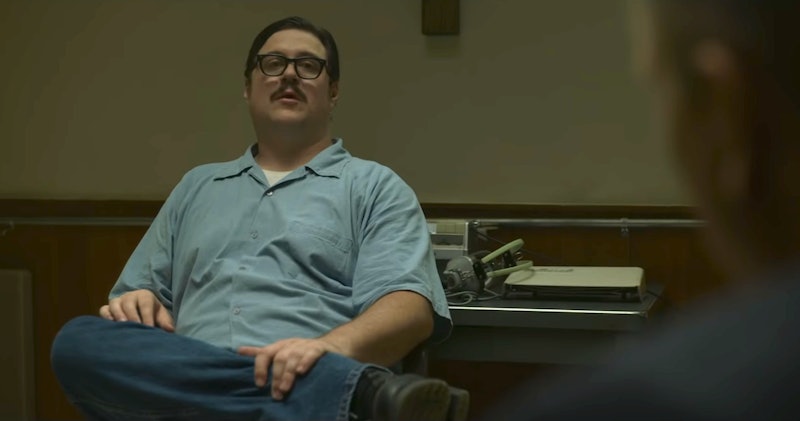 You might not think a serial killer would make for the greatest conversational companion. But Holden Ford forged a strange relationship with Edmund Kemper in Mindhunter to gain insights on other murderers. Cameron Britton's interpretation of this real-life serial killer was a major presence in Season 1 and Kemper is in Mindhunter Season 2. In the Season 1 finale, Kemper attempted suicide seemingly in a way to reconnect with Ford. When Jonathan Groff's FBI agent visited him in the hospital, Kemper told Ford he still had something to offer the authorities. Previews for Season 2 show that Kemper, with his firsthand knowledge of killing and his extremely high IQ, will still be helping agents Ford and Bill Tench when the new season drops on Aug. 16.

Back in February 2019 when Britton was promoting a role in another Netflix series — The Umbrella Academy — he told RadioTimes.com that he couldn't confirm his involvement in Mindhunter Season 2. "Netflix pulls those memories out of me," Britton said. "I hope I'm in it and I can't remember, it's a blind spot." But a month ahead of the Season 2 premiere, Netflix launched an interactive website with photos from the upcoming installment that showed that Kemper would appear again. Following the launch of the website, Britton took to social media to share the news that he was indeed in Season 2.

A couple of weeks later, the Season 2 teaser trailer featured Ed as he discussed a killer who was alluding Ford and Tench. "Have you got somebody, Holden? Someone you can't catch? This person you're after he has an overwhelming fantasy life. Fantasies of what he's done, what he wants to do. His dreams will consume him, soon the real world won't even compare," Ed said. Tench inquired, "How do we catch a fantasy, Ed?" And Ed replied, "If he's any good, you can't."

Based on the preview, Ed is most likely discussing the BTK Killer with the two FBI agents. But that's not the only serial killer that Ed will provide insight on. In the main Season 2 trailer, Ed appears at the very end to provide some commentary on Charles Manson. "One more thing. Manson is small, like really small. Try not to stare," he informs Ford and Tench. Compared to the towering Kemper, who stands at six feet nine inches in real life, Manson's height of five feet two inches is quite small.

Kemper's return may be surprising because of how Ford and he ended things in the final episode of Season 1. After Kemper said he could easily kill him and grabbed the federal agent for a hug, Ford suffered a panic attack. Ford is loosely based on FBI special agent John E. Douglas, who wrote the Mindhunter book. Douglas really did interview Kemper to help authorities profile murderers. In a conversation with Vulture, Douglas clarified that while his interviews with serial killers did take a toll on him mentally, Kemper never touched him. "The Kemper part was not true; Kemper never grabbed me," the former FBI agent said. Douglas also insinuated to A&E that he hadn't been afraid of Kemper when interviewing him.

Holden's relationship with Kemper appears to be deeper on Mindhunter than Douglas' real interactions with him were. So as Kemper helps Holden figure out the psychology of serial killers in Season 2, he's bound to continue to analyze the FBI agent along the way — and it just might continue to be a detriment to Ford's mental wellbeing.