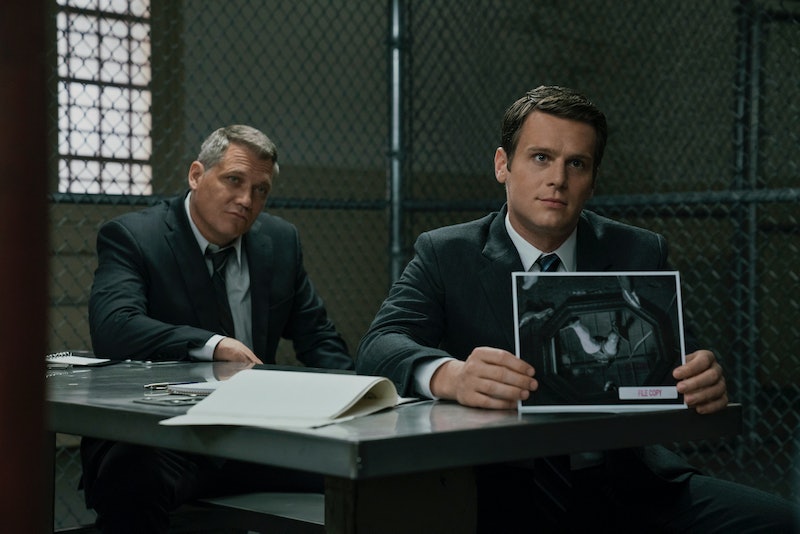 It appears, Ed Kemper is back to help FBI agents Holden Ford and Bill Tench catch their killer. In the Mindhunter Season 2 teaser trailer, Kemper plays a role in their latest investigation, which is focused on the Atlanta Child Murders. But, from the looks of the minute-long clip, there are other serial killers' minds that these FBI agents have to contend with, including Charles Manson, who is making his Mindhunter debut in the new season.

"Have you got somebody, Holden? Somebody you can't catch?" Kemper (Cameron Britton) asks Jonathan Groff's character in the trailer's opening. The grin on his face let's you know he's a little too excited for this assignment. "This person you are after, he has an overwhelming fantasy life," Kemper states in voiceover. "Fantasies of what he's done. What he wants to do. His dreams will consume him. Soon, the real world too much to bear."

This season is definitely going to be just as creepy as the first one. If not, more so, since this season will take viewers into the mind of Manson, who pops up at the 45-second mark. It's just a quick glimpse, a blink and you'll miss him sneak peek of the leader of the Manson Family, played by Daniel Herriman, who should look familiar to anyone who's seen Once Upon A Time... In Hollywood.

Yes, that is the same actor who plays Manson in the Quentin Tarantino film, which takes place in 1969, a little over a decade before this season of Mindhunter is set. Back in March, Herriman told Entertainment Tonight that there's "an 11-year age gap in the Mansons, so there's a slight variation both in how they look and in how the scenes are." As of now, it's unclear what Manson's role will be in Mindhunter Season 2.

From the trailer, though, it's clear that Holden is after a killer he can't catch, possibly, more than one. This season the FBI is still trying to catch Dennis, the ADT Security employee, who is believed to be the infamous BTK Killer, which stands for blind, torture, kill. The trailer ends with a women who is terrified by what she finds tied up in her bathroom, offering a clue that it is the serial killer caught in 2005.

However, this season also looks at the case of the Atlanta Child Murderer, who between July 1979 and May 1981, murdered at least 29 African American children, teens, and adults in Atlanta, Georgia. While, Wayne Williams was convicted of two of the murders in 1982, and later linked to 20 more of the murders, according to the New York Times, he was never tried or convicted for the murders of the children. Some even believe, he was wrongly accused and the real Atlanta Child Murderer is still out there.

Williams will play significant role in this season, according to IndieWire, which will pick up "in the back half of the investigation as the FBI is called in to Georgia." In the trailer, Kemper makes it clear, that if whoever Holden is trying to find is as good as they fear, they'll be nearly impossible to catch. It's a warning to fans that this season, which premieres Aug. 16, might leave them with more questions than answers.

More like this
'The Queen’s Gambit' Season 2 Tweet Wasn’t From Anya Taylor-Joy
By Mary Kate McGrath, Jack Irvin and Grace Wehniainen
Netflix Shut Down 'Bridgerton' S3 Rumours About A “Very Dark” Storyline
By Bustle
'The Crown' Season 6 Has Suspended Filming "Out Of Respect" For The Queen's Death
By Bustle Staff
Everything To Know About 'RHONY' Season 14
By Jake Viswanath, Alyssa Lapid and Brad Witter
Get Even More From Bustle — Sign Up For The Newsletter
From hair trends to relationship advice, our daily newsletter has everything you need to sound like a person who’s on TikTok, even if you aren’t.