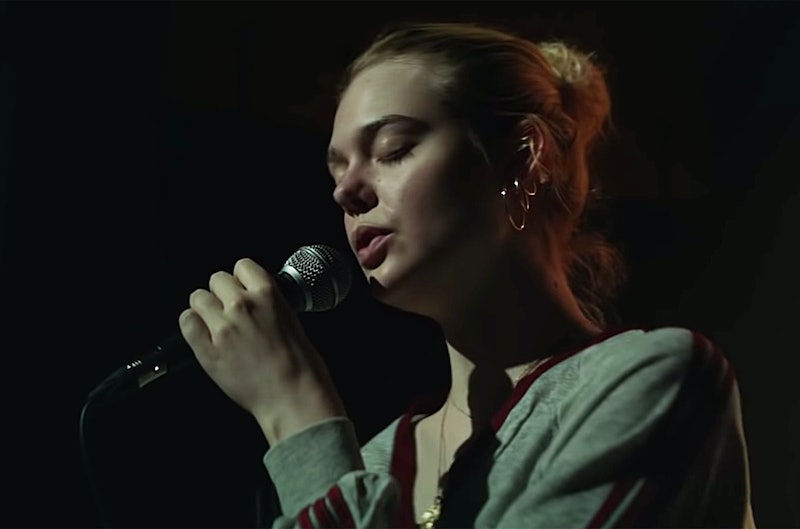 In the new indie film Teen Spirit, hitting theaters April 12, Elle Fanning plays a bored Polish girl, Violet Valenski, living with her mother on the insular Isle of Wight. She loves her mother and her horse, but her passion is music. She sneaks off to perform covers at a local bar where a handful of elderly men barely lift their hands to applaud when she's finished a song, mostly because they can't be bothered to pay attention. But when she finds out an American Idol-esque competition is holding auditions, she's convinced she's found her pathway to becoming a pop star. Fanning has already proven she can light up the screen with her acting chops in films like Maleficent, The Neon Demon, and The Beguiled, but what about her vocal skills? Is Elle Fanning really singing in Teen Spirit?

She sure is. In fact, that's one of the reasons Fanning was gunning for the role in the first place.

“I would dance and sing constantly," Fanning told Net-a-Porter. "My sister would yell at me to shut up ‘cause I was singing all the time, too loud."

Teen Spirit isn't Fanning's first time singing on screen – she fronted a punk band in John Cameron Mitchell's How To Talk To Girls at Parties – but this is a decidedly different turn with Fanning taking center stage, singing upbeat pop tracks like Robyn's "Dancing On My Own" and slower mid-tempo songs like Tegan and Sara's "I Was a Fool."

Writer/director Max Minghella (most recognizable as Peter in Hulu's The Handmaid's Tale, and whom Fanning jokingly refers to as a "pop whore" in Billboard) has been working on Teen Spirit since 2009. Because the first time filmmaker wanted to use well-known pop songs for his feature debut, the music clearance process took some time. But once he was able to bring on musical supervisor Marius de Vries (who worked on both Romeo + Juliet and La La Land) and partner with Interscope Records, Billboard reports, things started falling into place. It was around that time Fanning had her agents reach out with interest in auditioning for the lead role.

“It was inside me—I would dream of myself one day being onstage,” Fanning told Vanity Fair. “I always thought, ‘That would be so cool to get to do that ... but I’m an actress. So what — I’m going to become like Katy Perry or something? It doesn’t work like that. But I did have a secret desire in the back of my mind because singing is something I loved to do.”

Fanning's team sent Minghella a video of her performing a song with friend folk musician Woodkid at the at the Montreux Jazz Festival in 2016.

“I was very confident,” Fanning told Vanity Fair. “I was very, ‘I can sing.’ I wanted the part so bad."

It was enough to pique Minghella's interest, and he brought Fanning in to spend four months with de Vries.

“I owe him everything for getting me prepared for [the role],” Fanning told Billboard, adding that she modeled Violet's performances after Perry, Robyn, Taylor Swift, and Kanye West.

“The way they perform is so polished and particular,” Fanning told Billboard. “Also my character Violet looks up to all those pop idols so that's who she would be watching and trying emulate.”

It was nerve-wracking, Fanning admits, to take on such popular songs in Teen Spirit, including Ellie Goulding’s “Lights," but working with de Vries helped build her confidence. He took her to see Björk, and Fanning says she also watched Katy Perry: Part of Me and Gaga: Five Foot Two, music documentaries that inspired Minghella, according to Billboard. de Vries, who also worked with Emma Stone in La La Land, recorded Fanning's vocals and then had her listen back to perfect breath control and stamina, per Billboard.

All the hard work paid off. “She sings all of the music live in the film,” Minghella told Vanity Fair. “She was doing multiple takes of these performances. And all of the audio is usable.” One day, she had to perform for 12 hours straight.

“We had all of the Interscope executives on set that day, and none of them could believe it," Minghella told Vanity Fair. "They told me that no professional singer would be able to do what she’s doing — 12 hours of physical exhaustion and having to sound perfect, and sound like you could potentially win a singing competition.”

Fanning told Vanity Fair channelled the likes of Rihanna, Swift, and Perry to get into their mental space on-stage.

“I was shaking,” she said. “I was just so nervous to finally show everybody ... I think that, exactly like what happens with Violet, a rage just overtook me. ... It wasn’t about being pretty. It was just about being truthful, and that’s what I tried to do.”

Once Fanning nailed her final, winning performance (of Sigrid's song "Don't Kill My Vibe"), she said she didn't want to stop.

"Because of the adrenaline,” she told Vanity Fair. “We had a real audience! I was like, ‘Wow. I’m really performing for people.’ And they were into it. I got to interact with them and just unleash myself.” She told Billboard that, like Violet before she makes it to the Teen Spirit finals, she danced on stage like she "dance[s] in [her] room."

“The best performers get lost in themselves," Fanning said. "You feel like there’s no barrier between you and them. They know people are watching, but they’re just in it.”

Fanning was also able to record an original track for Teen Spirit, written by Jack Antonoff, whose work with Swift and Lorde she loved. The song, "Wildflowers," was originally written for Carly Rae Jepsen, but never released — until now.

“Doing Teen Spirit feels like it opened doors to this whole other land for me,” she told Billboard. “I feel like if I wanted to do an album now, maybe I could.” In the meantime, fans can check out Teen Spirit and stream the soundtrack — featuring Fanning's real voice.