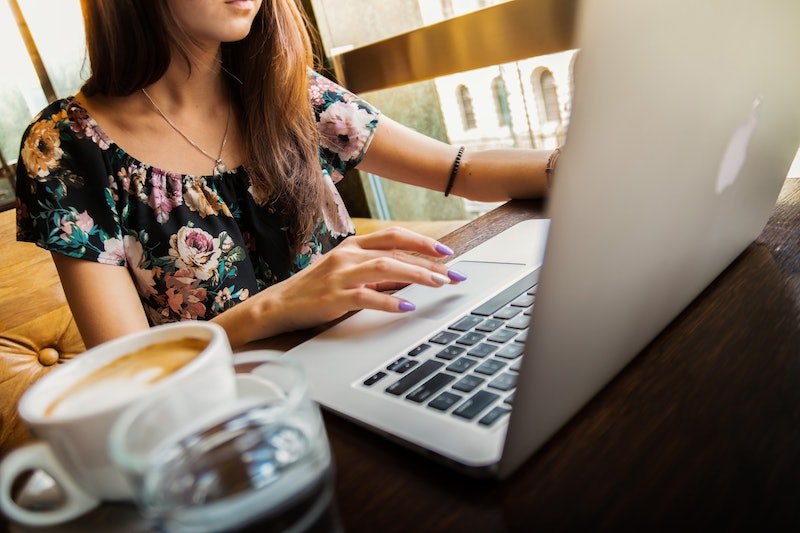 If you've ever suspected that Facebook is an echo chamber, repeating your own views back to you over and over and over again, you might actually be onto something. In fact, a recent study published in the Proceedings of the National Academy of Sciences suggests that our Facebook accounts literally do create an echo effect, where our friends regurgitate each other's views, sources, and information ad nauseam. This finding, of course, sits in opposition to the notion that social media is a way to connect us to others, including those we don't necessarily agree with, or those who views we aren't often exposed to — which, honestly, may not really be a good thing.

To conduct their study, which was published in Proceedings of the National Academy of Sciences of the United States of America, a team of Italian researchers used data modeling to map the spread of two kinds of content: Conspiracy theories and scientific information. The researchers found that both kinds of content were spread at the same rate among people who share the same views and values.

As we have all heard lately, the spread of "fake news" and "alternative facts" is no joke. In fact, when major platforms purport fake news and alternate facts as truth, it can become dangerous, spreading misinformation at alarming rates.

But even when it's our friends, family members, and coworkers spreading conspiracy theories, and not just pundits, these inaccurate statements can spread like wildfire. This leads us to wonder: If so many people are exposed to fake news, why aren't we seeing it in our feeds, too?

Just because we don't see it in our social media, doesn't mean other people aren't. As the paper suggests, "Our findings show that users mostly tend to select and share content related to a specific narrative and to ignore the rest." It appears that "social homogeneity is the primary driver of content diffusion," with a common resulting being "the formation of homogeneous, polarized clusters."

Basically, this means that whether your information is factually accurate or not, Facebook users tend to share information that has a consistent narrative and framing to what their Facebook friends already share. This creates an echo effect of people repeating what those in their circle already believe, whether it is accurate or not.

And before we convince ourselves that it's only certain communities that are vulnerable to falling for conspiracy theories and fake news, it's important to remember that everyone is struggling to determine real from fake news. A recent study from Standford's Graduate School of Education suggests that middle, high school, and college students across the country have a difficult time establishing what is fake news versus verifiable news when it's available online — so don't think you're exempt because you're generally tech-savvy. It affects us all.

So, how do we combat this echo effect? Having friends on social media that share different views than you do is a good start. If you're seeking to better understand perspectives outside of your own — even if those include people who share conspiracy theories or other forms of fake news — befriending and keeping those people on your social media pages is a good place to start. Keep the discourse civil — and if you really have to, you can always unfriend them again. It's your news feed, and you can fill it with whatever you like.