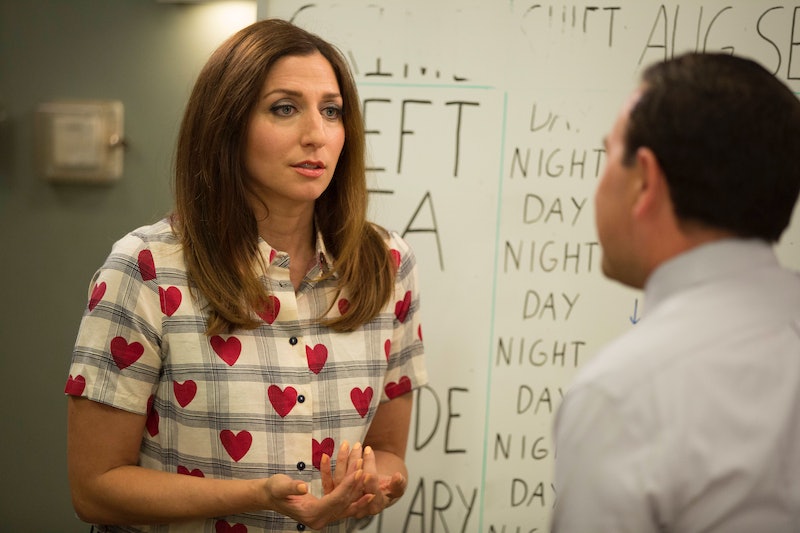 The second half of the Brooklyn Nine-Nine Season 4 fall finale was pretty mind-boggling to begin with. Jake turned to criminal and frequent foe Doug Judy, aka the Pontiac Bandit (Craig Robinson), to help him catch the last remaining fugitive who escaped prison after intimidating the driver into overturning the van. That's because this very dangerous criminal happened to be Doug's foster brother. But by the end of this episode, I didn't know what to think since Gina's fate on Brooklyn Nine-Nine came into question.

I had to pick my jaw off the floor after I watched the final moments of the fall finale. And obviously if you don't want to see a MAJOR SPOILER, avert your eyes now. After coaching Charles in the art of not over-texting in an effort to allow him to get in on the Nine-Nine's group texts without pissing everyone off, Gina was hit by a bus as she checked out Charles' new-and-improved texting skills in the middle of the street. Then those words dreaded by TV fans the world over came on the screen: "To Be Continued..."

I don't want to say that all the drama with the escaped convict and the Pontiac Bandit was a red herring, but it certainly felt that way by the end of the episode. I was so caught up in trying to figure out whether or not Doug was really trying to help Jake, taking in Captain Holt's disapproval of their partnership, and wondering if they would ever catch the perp that I definitely did not see Gina's accident coming. Though it did seem like Doug was going to betray Jake once again as he drove off with his foster brother, he showed that he was really on the NYPD's side as he failed to load the con's gun and then knocked him out so that Jake and Holt could get him back in jail.

Just when it seemed like the episode was going to come to some grand resolution, it went and gave us a ginormous cliffhanger with Gina, as all good fall finales should do, I suppose. Of course, I'm hoping that this doesn't mean Gina is dead or seriously injured because her funky-freshness and one-liners add some much-needed kookiness to the series that no other character — or actor like Chelsea Peretti, for that matter — could provide. There have been no official announcements about Peretti leaving the show, so all I can do is keep wishing that she remains a fixture on the series.

Let's remember that we faced a similar situation with Gina when she left the Nine-Nine after Holt was reassigned to the NYPD's communications department at the end of Season 2 and the beginning of Season 3. But Holt and Gina both remained on the show and eventually returned to the 99th Precinct safe, sound, and better than ever.

So if Gina isn't killed off the show, where can Brooklyn Nine-Nine go from here with her character? Well, she'll most likely sustain some sort of injury, and it could be comical to see how she handles the challenge, as well as who will be brought in to replace her at the precinct while she recovers. I would personally love to see what would happen if Holt got an assistant who is way less like Gina and way more like him: straight-laced, serious, and sophisticated. Holt and Gina's polar-opposite personalities have a way of balancing each other out and keeping each other in check, so I think the captain would find himself in a whole mess of trouble if he got an assistant who was basically his twin.

It'll be interesting to see how Gina's accident impacts the rest of the Brooklyn Nine-Nine squad, too. I have a feeling that Charles will feel some guilt about it since he was the one who sent the text that she checked right before she got hit by the bus. Gina is especially close to Jake and Terry, so this development is going to cause some sadness and maybe even some tension for them among the rest of the gang as well.

I'm hoping for a speedy and successful recovery for Gina, but it's possible that one good thing will come out of the accident. It's likely that we'll not only see more of the character onscreen but also a deeper and more nuanced character development when the rest of this season of Brooklyn Nine-Nine continues.

More like this
'Brookside' Is Coming Back & Soap Opera Fans Are Going Wild
By Sam Ramsden
Brooklyn From 'The Bachelor' May Have Accidentally Predicted Her Time On The Show On IG
By Grace Wehniainen
You Might Want To Rewatch This Key 'On My Block' Scene To Understand 'Freeridge'
By Grace Wehniainen
The 'Freeridge' Cast Shared Their Hopes For A Potential Season 2
By Grace Wehniainen
Get Even More From Bustle — Sign Up For The Newsletter
From hair trends to relationship advice, our daily newsletter has everything you need to sound like a person who’s on TikTok, even if you aren’t.