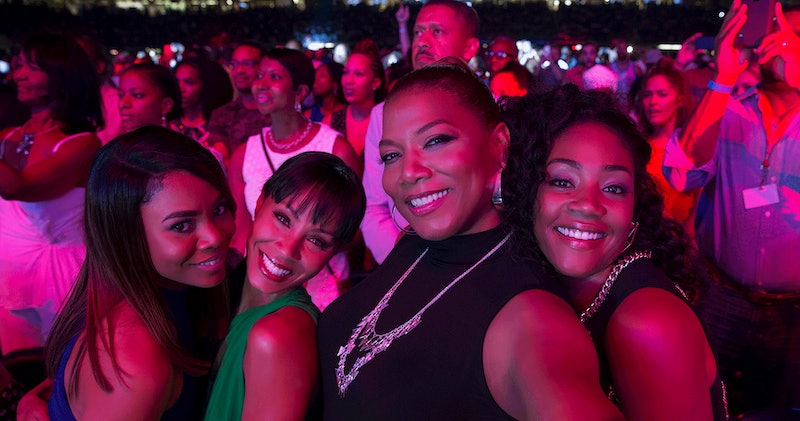 One of the funniest movies of 2017, Girls Trip, racked up a slew of nominations at the 2018 MTV Movie & TV Awards. And if you haven't already seen the film, you're gonna want to do so ASAP. And thankfully, Girls Trip is streaming — just not on three of the major streaming sites: Netflix, Hulu, or Amazon Prime.

If you have access to one particular cable channel, though, you're in luck. The acclaimed comedy is currently on HBO which means that if you've signed up for the service, you can stream the movie on HBO Go or HBO NOW. But if you don't have one of those accounts, there's no need to worry. If you head to the HBO NOW site, you'll find that you're able to sign up for a month-long free trial for the service. So, get ready to watch all of the Girls Trip shenanigans.

There's also the option to buy the film, if you can't sign up for the HBO NOW free trial. If you were to go that route, you can buy it on Amazon for $9.99 or on iTunes for the same price. Wherever you manage to see the comedy, you definitely won't regret giving Girls Trip a watch.

According to BlackFilm, the comedy was the first to reach $100 million in ticket sales that was "produced, directed, written by and starring African Americans." The film managed to gross over $140 million worldwide, per Box Office Mojo, which is definitely not too shabby for an R-rated comedic movie.

Girls Trip also saw loads of success besides scoring such big box office numbers, as it featured a breakthrough performance by Haddish. In fact, people loved her so much in the film (who wouldn't, honestly?), that there was even talk that her role could have earned her an Academy Award nomination, per The Daily Beast.

While the nomination didn't happen, the actor has still found a ton of success in the entertainment industry since she stole the show in Girls Trip. Haddish starred in The Last O.G. with Tracy Morgan, is starring in the upcoming film Night Film with Kevin Hart. And now she's getting to host the MTV Movie & TV Awards, where she'll make Girls Trip fans and newcomers alike totally fall in love with her.

In case you can't get enough Girls Trip after you watch the movie, don't worry — there could be more from the Flossy Posse coming your way, according to star Kate Walsh. According to Walsh, who portrayed Hall's character's assistant Elizabeth Davelli in the film, there's a possibility that there could be a sequel on the horizon. When asked by host Wendy Williams on The Wendy Williams Show about whether there's a sequel happening, she said, "I think so." She also said, while crossing her fingers, "Yeah, that's what I hear."

While nothing has been confirmed as of yet, and Walsh's comments only indicated that there is the possibility of a sequel, it is still a hopeful sign that you'll see the Girls Trip ladies back in action sometime in the future. In the meantime, you can catch the movie that started it all to see the hilarious hijinks from Haddish, Hall, and the rest of the talented cast.