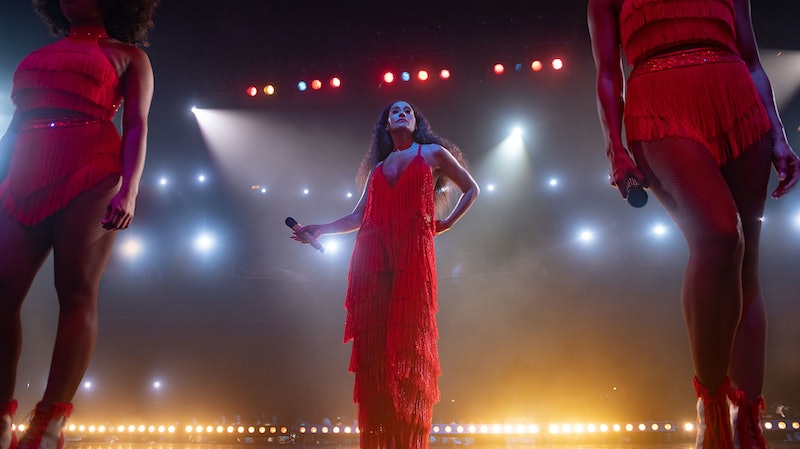 It's safe to say that actor Tracee Ellis Ross has fully stepped out of the considerable shadow cast by her very famous mother, Diana Ross. To date, Ellis Ross has starred in two successful sitcoms (Girlfriends and black-ish) and co-created a third (mixed-ish), and she's also found success in film. In her latest movie, The High Note, Ellis Ross appears to be embracing her maternal heritage like never before by portraying musical superstar Grace Davis. But is The High Note character Grace Davis based on Diana Ross, or are the similarities between Ellis Ross' film and her mother's life merely coincidental?

The short answer is no, The High Note is not about Ross. But you'd be forgiven for believing that it was thanks to the film's marketing. In the film, Ellis Ross plays Grace, a diva in her forties who has been coasting on her old hits for years. When presented with the opportunity to do a Las Vegas residency where she would make lots of money playing her old songs night in and night out, Davis balks, instead longing to record a new album.

If you watch the trailer, you'll see that Grace bears more than a passing resemblance to Ross, and it's hard to imagine that that's an accident. Especially when the character hits the stage in a bright red frilly jumpsuit that looks like it could have been worn by Ross during her '70s disco heyday.

Beyond visual similarities, however, there isn't much in common between Davis and Ross, except for one very relatable aspect of their personalities. "In all honesty, none of this is taken from the world I know of being my mom's child," Ellis Ross told Entertainment Weekly. "The story really has nothing to do with any of the things that I know from my mom's experience. Except for the fact that there's a real humanity to this woman and she's not a paper-thin quote-unquote diva that the world usually paints larger-than-life women as. She's a real person. That's the only connection that I can draw. That a woman who holds a great space in the world is actually a human with a heart, who has fears and disappointments and struggles all on her own."

As for the singing in the film, that's really Ellis Ross' voice you hear, and the comparisons to her mother are not lost on the actor. In fact, they're the reason why she's waited so long to show her enviable singing voice to the world. "There’s a reason I waited 47 years to let my voice out publicly!" she told People. "It was my childhood dream to sing — but terrifying when your mother is who my mother is. The idea of comparison; that’s in a child’s mind or an adult’s mind. I could be taken down and obliterated."

It wasn't until last year when Ellis Ross mustered up the courage to allow her mother to hear her sing, playing her "Love Myself," the lead single from The High Note soundtrack. "It felt like bringing her my heart," Ellis Ross told People. "And then my mother said, 'Finally. Finally.' ... My mom teared up and we just kept looking at each other. We were both so excited. My mom has always known I could sing. There have been gentle nudges over the years, so this was a big moment."

The High Note may not be based on Ross, but since it's a movie about an older famous singer that just happens to be portrayed by Ross' daughter, it's only natural to make the comparisons.

More like this
Austin Butler Recalls Lisa Marie Presley Showing Him Elvis’ Bedroom
By Jake Viswanath
You’ll Definitely Recognise Isadóra Bjarkardóttir Barney’s Mum
By Maxine Harrison
Lisa Marie Presley's Secret Granddaughter Was Revealed At Her Funeral Out Of Nowhere
By Jake Viswanath
Gerard Butler Insisted On Adding This Pivotal Scene To 'Plane'
By Catharina Cheung
Get Even More From Bustle — Sign Up For The Newsletter
From hair trends to relationship advice, our daily newsletter has everything you need to sound like a person who’s on TikTok, even if you aren’t.