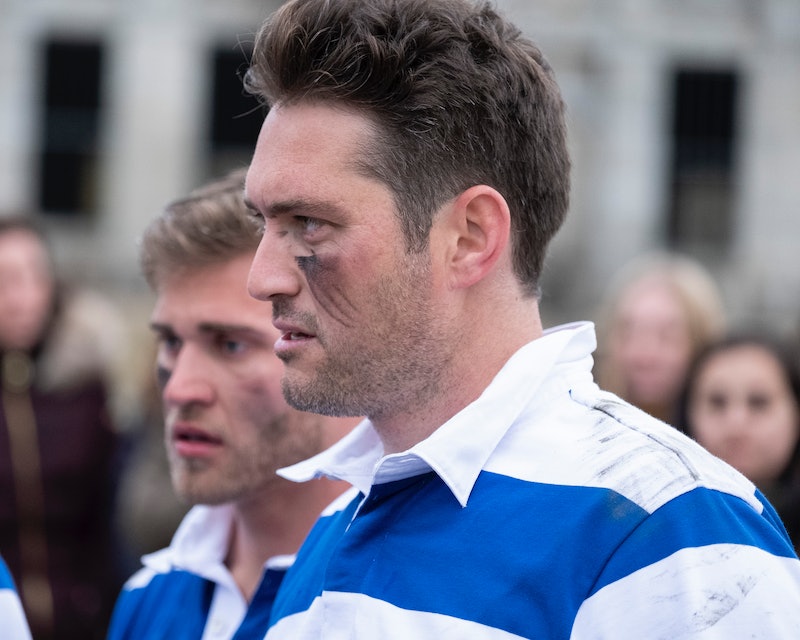 With 30 men vying for one woman's heart, there are always a few men who end up slipping through the cracks on The Bachelorette. And five weeks into Hannah B.'s season, one of those men seems to be Grant. He hasn't received much screen time, which could be a sign that he just isn't connecting with Hannah. And while he's still hanging on by a thread (err — rose?), there's a good chance that after The Bachelorette, Grant is as single as "the dude" he calls himself.

That's right, as noted in his ABC bio, Grant considers himself the real-life "dude" a la Jeff Bridges' character in The Big Lebowski, which could explain why he's single. After all, "The Dude," aka Jeff Lebowski, is a middle-aged, unemployed alcoholic who only leaves his house to go bowling. According to his bio, Grant only compares himself to the character because his drink of choice is a white Russian and he "has no interest in hearing about your CrossFit workout plan or recent Instagram post" (sorry, Luke P.). He was banking on his El Duderino-like "real bluntness" to win Hannah's heart. We haven't seen much of that just yet on The Bachelorette, but we did see him conquer his very real fear of snakes, which should count for something.

For a guy who doesn't care about Instagram, though, Grant shares a lot of photos. And unlike some of the men, who have been posting about how much they loved getting to know Hannah, Grant's posts have been more goofy and light-hearted, implying that perhaps for him, the experience wasn't that serious. In fact, he hasn't uploaded a single photo of Hannah.

The first post on Grant's Instagram to reference his time on The Bachelorette is a photo of him with a rose clenched between his teeth. The caption reads only "#whataparty" accompanied by the rose emoji. On May 23, he shared a screen grab of just himself — not him with Hannah. The caption included the hashtags "#teamgrant" with a laughing emoji and "#thelookwhenimwaitingforher" with the explosion emoji. Last but not least, he shared a comment from someone who called him "Gerard Butler pretending to be an unemployed guy" on The Bachelorette. Grant seemed to appreciate the comparison, and captioned the re-gram with, "#sogood #mylookalike."

His ABC bio says he plans to call out guys who aren't on the show "for the right reasons," but while he may have gone on with every intention of falling for Hannah, it doesn't seem like he made much of a connection with her.

Grant hasn't shared any photos of anyone else who might be a love interest either, although he did go to Coachella with a big group of friends this year. Other than that, the only woman to make an appearance on his Instagram has been his mom. According to his ABC bio, though, he considers himself a romantic and loves PDA, so there's bound to be a dudette out there for him who likes white Russians as much as he does. It just doesn't seem like he's found her yet.