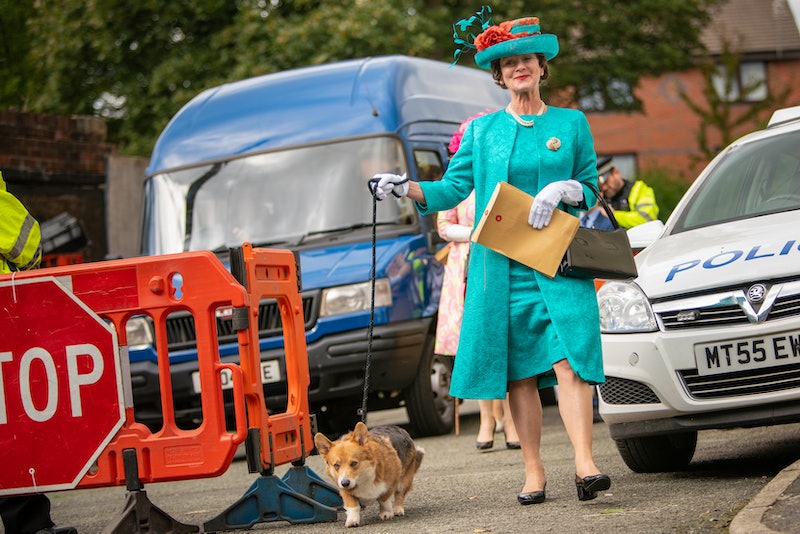 Imagine this: a new family are moving down the road, and they're causing a bit of a commotion. You open the door, and see the actual Queen bumbling about with boxes, and wonder how the hell this all happened. That's Sue Townsend's 1992 novel The Queen and I novel in a nutshell, and a Sky One adaptation of it is coming to your screen very soon. When the Royal Family are overthrown, they're relegated to a council estate somewhere in north England, known as Hellebore Close. It all looks pretty legit, but is Hellebore Close a real place?

Townsend has never explicitly said whether Hellebore Close — which the residents of the fictional street call 'Hell Close' — actually exists, as far as I can see. However, there is a Hellebore Close in Nottingham which seems pretty close to the council estate Townsend describes in her novel. If you wanted to, you could even buy a house there.

However, as the Daily Mail reported when they caught The Queen and I filming back in September, you won't see the actual Hellebore Close onscreen. Filming reportedly took place in Salford instead, and the Daily Mail walked in on a raucous looking street party, with the Queen looking trollied and all.

According to the show's IMDB page, the Queen is played by former Bond girl Samantha Bond (great casting, right?), while the Amanda Abbington plays her daughter, Anne. Oliver Chris, who you might recognise from Green Wing and Bridget Jones: The Edge of Reason plays Charles, who he bears an uncanny resemble to on the show. There's also a couple of hysterical appearances from David Walliams and Johnny Vegas, who play a couple of anti-Royalists, the former being the Prime Minister who orchestrates the whole situation.

You can catch the show on Christmas Eve at 6 p.m. on Sky One. If you haven't already read Townsend's excellent novel, you might not be prepared for the barrage of belly laughs coming your way. When Walliams, who plays politician Jack Barker, gets unexpectedly sworn in as PM, his first port of call is to abolish the monarchy. When they're moved to Hell Close, the Queen takes to it like, well, the Queen in a pit of corgis (although they're also taken away), but her other family members aren't so pleased.

As the country's currently in a state of disarray, it feels like an apt time for the adaptation to air. Townsend's novel also came out at a time when royal authority was being questioned, after all. 1992, the year the novel was published, now goes down in history, as the Guardian reports, as the Annus Horribilis — not as gross as it sounds, it's just a Latin phrase meaning "horrible year" — for the Royal Family, which was incidentally the year Fergie got her toes sucked. The show's not quite as on the nose as Theresa May being kicked out of her own current residence, but it's just hilarious and irreverent enough to be able to laugh at our own absurd Annus Horribilis.