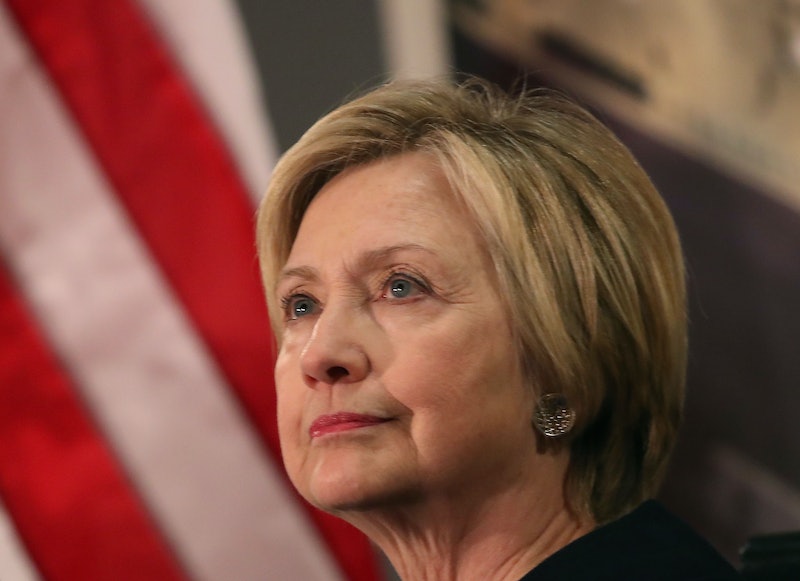 Of all the people who are expected to attend Inauguration Day events on Jan. 20, I've been the most curious about the Clintons. Namely, will Hillary Clinton be at the Inauguration Ball? I can imagine that it's been a tough couple of months for her and her family, plus all of the people who'd been rooting for Clinton to win the election (about 76 percent of the country's population, actually). Thus, I'm sure being there to watch her opponent get sworn in to the very office she worked so hard for isn't going to be easy, let alone dancing at a ball in his honor.

This will be the first time that Hillary Clinton and Trump will be seen at a public event together since their last election debate in October. Clinton's decision to attend wasn't automatic, however, and was only made after she had consulted several people close to her — both political advisers as well as friends — about whether or not it was a good idea, according to New York Magazine. Ultimately, they made the choice to go in order to show their support for the American democratic process.

Losing candidates sometimes, but don't always, attend their winning opponents' inauguration. Republican Sen. John McCain was there when Obama was sworn into office in 2008, but in 2013, Mitt Romney was not. It's a particularly unique dilemma this time, given that Bill Clinton is a former president and given that Hillary Clinton lost to president-elect Donald Trump. Clinton doesn't have to go by any means, and honestly, I think she's being, for lack of a better word, a really good sport.

The Inaugural Ball might be a different matter. While several balls and other inauguration-related festivities are planned throughout Washington, D.C., and around the nation, there are only two official inaugural balls, both of which Trump will be attending. (Two isn't considered a lot compared to previous presidents. For instance, Bill and Hillary Clinton attended a whopping 14 balls back in 1993. More recently, Barack and Michelle Obama went to 10 inaugural balls.)

There's no confirmation as to whether or not the Clintons will be sticking around for the Inauguration Ball afterwards. President Obama and First Lady Michelle Obama are reportedly flying straight to Andrews Air Force Base after Trump's swearing-in ceremony, and then they're off to Palm Springs, Calif., for a nice, long vacation — which means they, at least, are probably not going to be attending any balls.

Honestly, I wouldn't be at all surprised if Clinton decided to turn in early on Friday. Several Democrats have had issues obtaining tickets to the Inaugural Ball, along with the parade and other inauguration events.

Ever since Election Day on Nov. 8, when I covered Hillary Clinton's supposed victory party at the Javits Convention Center in NYC for 17 consecutive hours, I've counted down the days until Trump's inauguration with dread. My heart feels heavy just thinking about what should've been not only Hillary Clinton's win, but a win for everyone who believes in feminism and the inclusivity of all people.

Regardless of how many inauguration events Clinton is going to this year, I know we will continue to move forward with Clinton as a collective social justice movement, long after Trump's inauguration is over. Four years feels like a long time to have someone like Trump as president, but then again, it's only four years. Let's do everything in our power to make sure they're not fruitless.