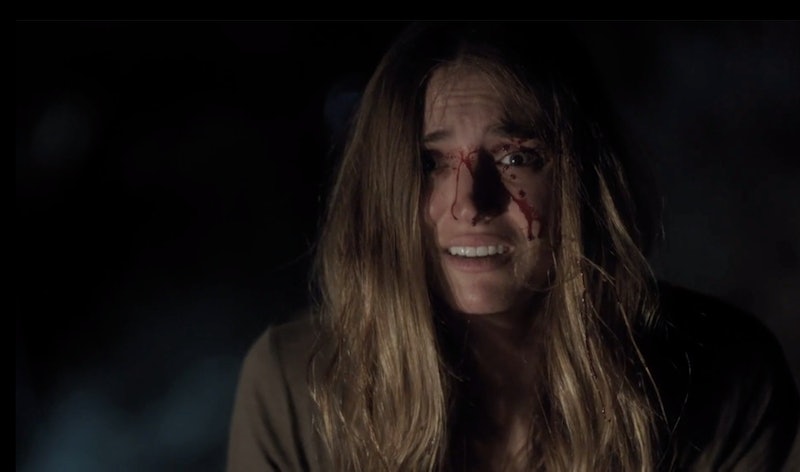 In 2016, Lifetime released an original horror film that made you tuck your toes in a little tighter before bed that night. The first of now two movies, House of Darkness is based on a true story of a family convinced that supernatural forces held reign over their 100-year-old rural home. Its reprise and another LMN original, House of Darkness: New Blood, is based on true events as well, according to the network, and it may be even scarier than the first.

Both movies emanate some serious American Horror Story: My Roanoke Nightmare vibes — Southern plantation-esque homes, creaky grandiose staircases, pig-head themed horror, and well, lots of blood are just a few dramatic elements the productions share. And they're all at least loosely based off of true events.

It can be assumed that New Blood will be particularly bloody, per its title, but the trailer doesn't reveal much. It does reveal, however, a new cast and a new storyline. So the film won't be a direct sequel to the first, but more like another true haunted house story to add to the appropriately named series.

The first film follows Kelly and her San Franciscan family to their new farm home that they hope will give them a fresh start. They soon learn that every family who has lived in the home for over a century has experienced tragic loss. New Blood follows Brooke, played by Kate Stone, as she resolves to move on with her love life after the sudden disappearance of her husband five years earlier. Brooke, her new fiancé Judd, and her son Dylan are excited to build a new life together. That is, until they have to spend the summer with Judd's ailing mother in her ramshackle Red Creek farm house.

Brooke begins seeing things around the house and becomes concerned with her health, assuming the visions to be a side effect of her newly introduced medication. But it turns out that what's going on in this particular house is the effect of much more than a prescription drug. Judd's mother's sickness may not just be physical, and their family could be in some serious supernatural danger.

That said, it doesn't appear that the first and second House of Darkness movies are based off of stories from owners of the same house, although that would make total sense. Instead, it seems as though Brooke's story, although similar to Kelly's, is tied to an entirely different haunted home.

As with the first movie, it's unclear exactly which portions of the New Blood story are based off of true events, which means (hopefully?) the chillingly terrifying parts (entranced Grandma in a rocking chair, anyone?) aren't necessarily all true, but rather are embellished for thrill's sake. Or, it could mean the opposite — that the scariest parts are indeed, the most valid, in which case you should prepare to triple check your closet for suspicious activity before bed and sleep with the lights on for at least a week. And while that may not necessarily be the direct solution for silencing unwelcome spirits, it's worth a shot — unless you'd like your story to be the subject of the next movie. Your choice.