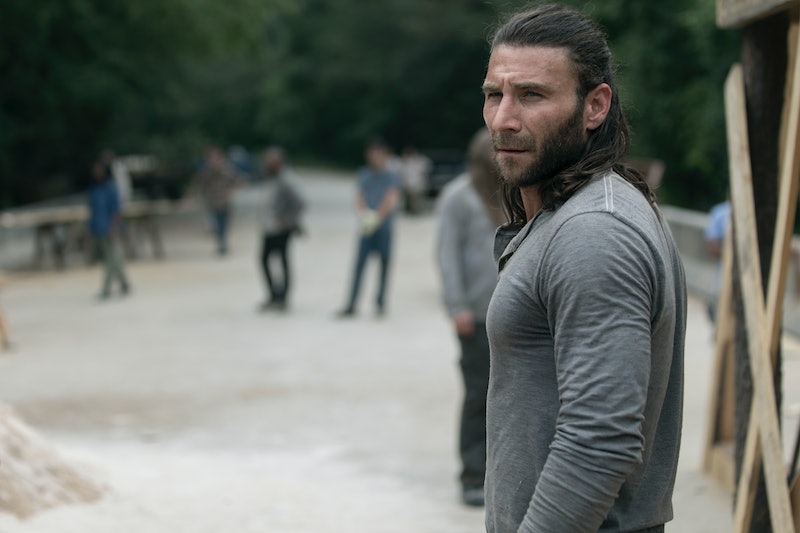 After all that the survivors of the zombie apocalypse have been through, Season 9 of The Walking Dead is the time for humanity to thrive. Unfortunately, there's still trouble between the Saviors and the rest of the communities. And one of those troublesome Saviors is Justin from The Walking Dead. Justin is a new character for Season 9, so audiences' first glimpse of him was at the Sanctuary during "A New Beginning." Though it's clear that he'll cause issues for Daryl this season, fans won't know just how much because Justin isn't in The Walking Dead comics.

In the Season 9 premiere, Justin had two little moments that showed his personality. He strung up a walker to serve as a scarecrow, which Daryl ordered him to take down. Later, Daryl told Justin to remove the graffiti on the walls of the Sanctuary that says, "We are still Negan" and Justin gave Daryl some guff about it. Daryl was far from diplomatic in his response — after all, he told Rick that he was finished with leading the Sanctuary and being Rick's liaison to the crew. Justin did get up begrudgingly and do as he was told, but the tension between Rick's group and the Saviors who are still holding onto the days of Negan is mounting.

It's not clear if Justin acted that way toward Daryl because he was the one who wrote, "We are still Negan" or because he just doesn't like Daryl, but the preview for the second episode, "The Bridge," highlights just how bad Justin will be. The groups begin work on repairing the bridge that helps them travel back and forth from the communities of the Hilltop, Alexandria, Oceanside, and the Sanctuary. While the Hilltop thrives, the Sanctuary is unable to grow any food. So this trade route bridge is essential to the Sanctuary. Yet, Justin causes issues during the renovation by pushing Henry.

There's no reason this grown man should be pushing a child. And it seems to stop the rebuilding in its tracks and leads to a brawl on the bridge. Aaron is shown fighting the other created-for-the-TV-show Savior Jed while Daryl takes on Justin. Daryl is also shown fighting Daryl at the camp location, so these men will be battling it out after Justin's attack on Henry.

Carol has taken over leading the Sanctuary from Daryl, so Justin will eventually become her problem. But for "The Bridge," it seems that Daryl is taking Justin's disrespect personally. And like Daryl, Justin has no comic counterpart. In the comics though, there is a faction of the Saviors not wanting to follow Rick's rule after the war, so Justin seems to represent that group even if the TV show has taken a bit of a departure character-wise from this comic storyline.

Zach McGowan plays Justin and TV fans may recognize him from Shameless, Black Sails, Agents Of S.H.I.E.L.D., and The 100. Here, with his greasy long hair and bad attitude, he's bound to be a worthy opponent for Daryl. But let's hope Daryl can put him in his place before Justin causes even more issues for Carol at the Sanctuary. Although, when she hears that Justin has messed with her surrogate son Henry, she just might take care of him herself.