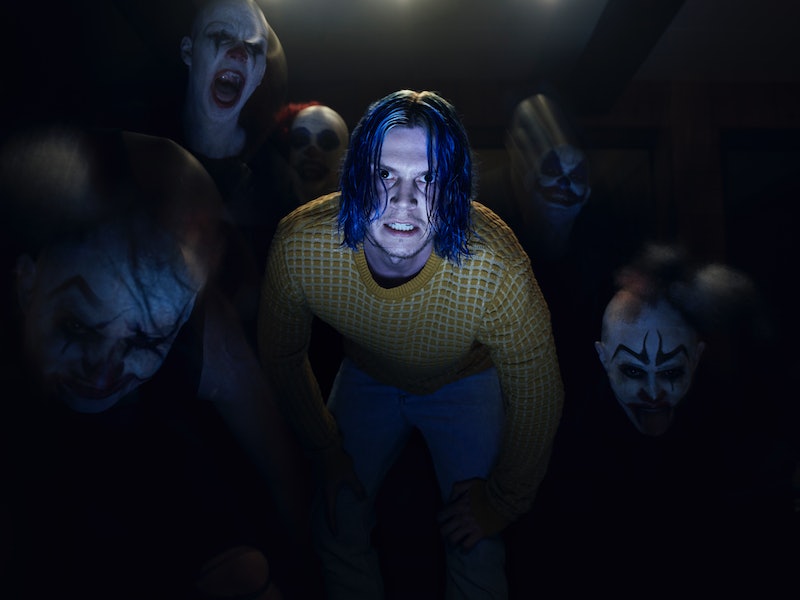 Avid viewers hunting for clues may be asking themselves if Kai is a clown on AHS: Cult after the events of the Season 7's second episode. Like a typical installment of American Horror Story, Cult is about a lot of things: it's about politics, it's about our social climate, it's about fear and cults and clowns and bees and Nicole Kidman fan clubs. How does it all tie together? After two episodes, it's still unclear what clowns have to do with the election and what any of it has to do with cults… but fans may have gotten their first hint in "Don't Be Afraid Of The Dark." Is Evan Peters' blue-haired character one of the clowns?

(Spoilers ahead for Episode 2!)

The question is raised when the power goes out in the neighborhood and Ally finds her home once again invaded by masked lunatics. One of the clowns makes his way into Ozzy's bedroom, where the little boy asks the intruder whether he's awake or merely dreaming. "You're asleep," the clown whispers, which successfully comforts the kid. And is it just me, or did that whisper sounds eerily like actor Evan Peters' voice?

Viewers have been listening to Peters' speech patterns for seven years now; even so, it's a little hard to tell if it's him, given the brevity of the clown's statement and the hushed tone of voice. But if Kai turned out to be under one of those clown masks, it would actually explain a lot about the season.

Right now, Kai appears to be nothing more than a basement-dwelling troll running for city council on a platform of fear. But what if he's actually the mastermind behind Season 7's titular cult? When Ozzy mentioned to Winter that he couldn't always tell when he was awake or having a night terror, she suggested that he "just ask" — so that's exactly what Ozzy did. It would have been simple for Winter to tell Kai about this, so that when he broke into the home, he would have an easy way to calm Ozzy and go about his nefarious deeds unimpeded.

In fact, this might not be the only information Winter has been feeding Kai. It really seems like Ally's phobias are being specifically targeted, from her fear of clowns to her fear of small holes. Is it really just a coincidence that the new neighbors who moved into the house of the murdered Changs happen to be beekeepers, triggering Ally's fears with hole-filled honeycombs? Or did Winter tell her brother about that specific phobia as well, so Kai could dispatch a couple of cult members to terrorize Ally from across the street?

Given that the season will eventually see Peters portraying various real-life cult leaders from throughout history, it makes sense that his fictional character would be a cult leader as well. And if Kai is a cult leader, then it makes sense that he would be one of the clowns terrorizing Ally. What's scary about that is the apparent ease with which he is able to recruit people of various political inclinations to his cause; his own sister, a Hillary supporter, appears to be his willing accomplice, and even the Jill Stein-voting Ally seems like she's gradually being seduced by his rhetoric of xenophobia.

A charismatic leader who can capitalize on the fears of people on both sides of the aisle and use them to spread violence and chaos? That's even scarier than a horde of random killer clowns. The way things are going, it seems like Kai is gaslighting Ally until she's scared enough to turn to him for help, becoming the latest and unlikeliest member of his cult. And then what? What is Kai's ultimate goal? That remains TBD, but given his brutal tactics so far, it can't be anything good.