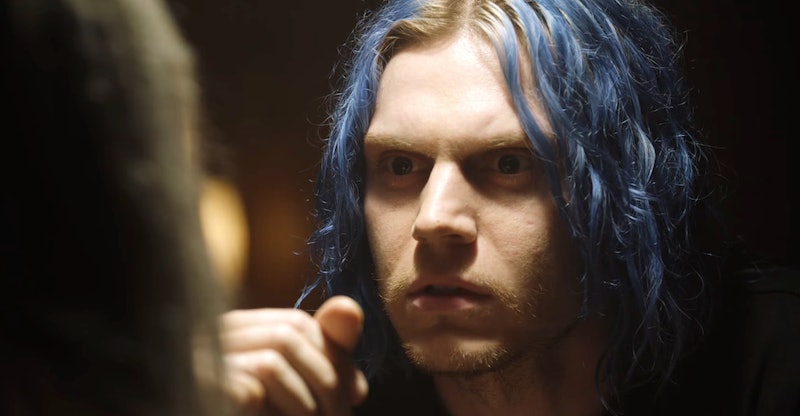 Although he occasionally takes a season or two off from being the bad guy, Evan Peters is back in the villain seat where he really shines in the Sept. 5 premiere of American Horror Story: Cult. As Kai Anderson, he triumphantly cheers when Donald Trump is made president, but there's far more going on with him that makes it seem like he's super evil. What is Kai Anderson on AHS: Cult? While his actions in the premiere episode of American Horror Story Season 7 are limited to channeling Trump with Cheetos on his face, making public statements at a town meeting, doing a pinkie pact with Winter, spilling coffee on Ally, and (the worst) throwing a urine-filled condom at Mexican immigrants, there's something incredibly ominous about Peters' character. And there's much more to this blue-haired guy than just being a local renegade.

During an early screening of American Horror Story: Cult, showrunner Ryan Murphy unveiled a lot of details about the latest installment of his franchise. As Entertainment Weekly reported, he explained that Peters will play multiple fringe leaders, including Charles Manson, Jim Jones, and David Koresh. (Kai is in the same grouping, though his "cult" hasn't been exposed to viewers yet.) Murphy said there would be no supernatural elements in this season of AHS, but based on Peters' eerie performance and the knowledge that he'll portray multiple individuals from throughout history, is it possible that Kai has actually been all of these men in past lives? Sure, that's supernatural, but Murphy has been known to mislead fans from time to time and there's something a bit otherworldly to Kai Anderson.

Going beyond embodying all of these leaders, there's also the potential that Kai could be evil incarnate. (Yes, yes, that would be another supernatural theory.) But even if he's not the embodiment of fear, he certainly thrives on it and perhaps causes it. He wants people to reach full panic mode so that the "chosen few" who are unafraid can "return at the head of the evolutionary table to shepherd the weak." Kai seems to consider himself the leader of the unafraid, but to gain power, he needs more of the population to be fearful.

Kai does appear to be a human in "Election Night" since he interacts with a number of characters, including Sarah Paulson's Ally and Billie Lourd's Winter. But that doesn't mean that Kai — and those other characters Peters will play — couldn't be forms that evil (with a capital E) takes. So while cult leaders often have an uncanny ability for charming coercion, Kai in Cult may suggest there's much more to their powers of persuasion.

More like this
Every 'That '70s Show' Character Who Returned For The Netflix Spinoff
By Grace Wehniainen
Here’s What Happens To Bill & Frank In 'The Last Of Us' Video Game
By Brad Witter
Michael B. Jordan Tackled His "Public Breakup" With Lori Harvey On 'SNL'
By Brad Witter
Shonda Rhimes Responded To The Surprise Exit Of A Day 1 'Grey's Anatomy' Figure
By Grace Wehniainen
Get Even More From Bustle — Sign Up For The Newsletter
From hair trends to relationship advice, our daily newsletter has everything you need to sound like a person who’s on TikTok, even if you aren’t.