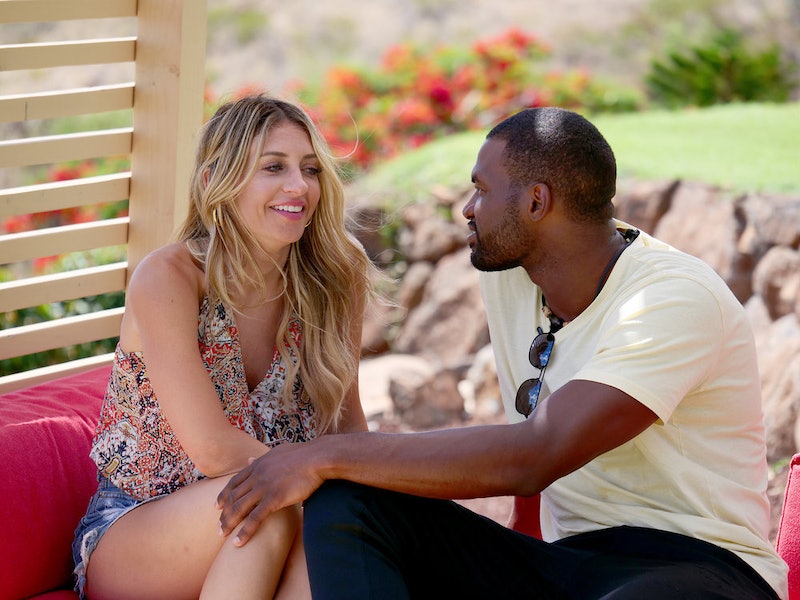 Spoilers ahead for Part 1 of the Temptation Island Season 2 finale. If you watched David repeatedly betray Kate on Temptation Island, you probably weren't surprised that their final bonfire didn't go well. By the time the credits rolled on the Dec. 12 episode, they hadn't officially broken up, but things were certainly heading that way. Now, the bigger question isn't if Kate will leave the island with David — it's if she'll leave with Dom.

A few weeks ago, a trail of flirty comments and likes on her Instagram led me to believe that Kate and Dom are dating after the show. That evidence has now mysteriously disappeared, which could mean one of three things: something happened between the two and Kate is now single, something happened between the two but they were never together in the first place, or the show's production team made them delete it all.

As outlined in my previous piece, I watched Dom — in real time — spam Kate's page with fire emojis, heart eyes, and likes. Kate never responded, but tried to be sneaky by liking a few. That was before their overnight date aired — on which they got closer romantically and even appear to have slept together.

Now, Dom's comments have been deleted from Kate's Nov. 19 photo, and the two are no longer following each other on Instagram or Twitter. Still, Dom retweets fan love for them as a couple, and in response to someone who thought Kate didn't like him, he wrote, "looks can be deceiving" with a winking emoji.

After the Nov. 28 episode of Temptation Island aired, Dom shared a clip of the rose petal heart he left on Kate's bed, proudly providing detailed behind-the-scenes notes. "I gave Kate these flowers because I appreciated her and the time we spent!" he wrote. "Also: 1. I picked these roses 2. I had more I could of dropped but I was considerate that she would have to pick them up and clean it 3. It wasn't her birthday or Valentine’s Day... this was by far my greatest date so I thanked her for it ... Gentleman takes notes... Ladies get you a me."

However, a week later, on Dec. 7, he surprisingly responded to a fan's not-so-supportive tweet. "Dom is not on kates level," the fan wrote. "he can do a lot better tbh." Dom quoted the tweet and left smiling emojis, which is out of step with his usually affectionate tone. It seems like his relationship with Kate could have shifted during the first week of December.

Kate's socials are now completely clean of Dom content, and it's unclear when that change was made. In a Dec. 3 interview, Fansided's "Hidden Remote" asked her if Dom was husband material, and she kept her response to a point-blank, "Yeah."

After his cryptic smiley face response on Twitter, Dom has continued to retweet fans who love his relationship with Kate, but he's also shared some less optimistic thoughts. He retweeted a tweet from Broderick Hunter that read, "Don't switch on me, I've got big plans." And on Dec. 10, he tweeted this:

So, either he and Kate are both super dedicated to throwing fans off, or their connection has fizzled out. Kate said that she wanted to focus on herself after leaving the island. It's possible that, after trying to make it work with Dom, she's finally doing that now.

She's back in Hoboken, where she moved from Miami to be with David before Temptation Island, per Hoboken Girl, and she's still a software consultant there. But she's also trying her hand at beauty influencing — according to her Instagram bio, she's a Monat haircare ambassador, and she shares her love for all kinds of professional cosmetic treatments, including facials from Attain Medspa and infrared sauna sessions at om.life Recovery Spa.

As for her relationship status, hopefully we'll get an update when the Temptation Island reunion airs Dec. 19.

More like this
The Bachelor’s Christina Mandrell Comes From One Of Country Music’s Most Famous Families
By Brad Witter
Mack & Domynique Reportedly Had An "Epic" Breakup On 'Married At First Sight'
By Brad Witter
All The Clues Clint & Gina Aren’t Still Together After 'MAFS' Season 16
By Brad Witter
Shaq Might've Spoiled His Relationship Status With Kirsten After 'MAFS'
By Brad Witter
Get Even More From Bustle — Sign Up For The Newsletter
From hair trends to relationship advice, our daily newsletter has everything you need to sound like a person who’s on TikTok, even if you aren’t.