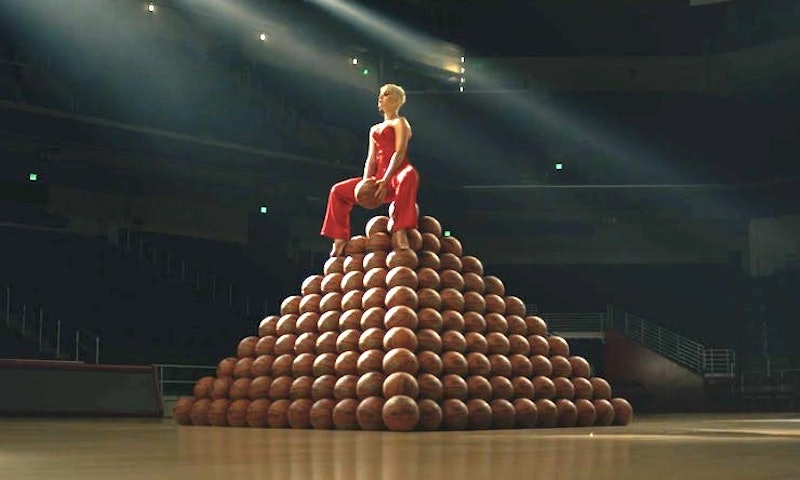 Katy Perry's "Swish Swish" music video is as loony as it is catchy. In addition to being full of memes, celebrity cameos, and pop culture references, there's something very cartoony about it. So it's only natural that people began wondering if Perry's "Swish Swish" is inspired by Space Jam. The internet couldn't help but draw comparisons between the video and the classic 1996 movie.

In the music video, Perry and the Tigers take on the Sheep, a team made up of bigger and more athletic-looking players. Not unlike the Tune Squad's opposing team, the Monstars. Perry is presumably the Michael Jordan of the group, winning the game with a heroic slam dunk (more on that later). She's accompanied by a group of unassuming players, including Jenna Ushkowitz of Glee fame and Gaten Matarazzo, who's known for playing Dustin on Stranger Things. Whether or not the rumor is true, however, the Space Jam comparisons just keep on coming and actually seem somewhat legitimate.

So, is there something to the theory that the Looney Tunes indirectly infiltrated Perry's music video? While she hasn't come out with a definitive answer, there is plenty of evidence that there is truth to it. Some are so slight that you may have missed them.

This epic dunk calls to mind the heart-stopping moment in Space Jam when Michael Jordan defies the laws of human physiology with a last-second basket.

After getting hit with a basketball, stars circle Perry's head in an obvious homage to the Looney Tunes trope.

In Space Jam, Bill Murray is seen wearing an umbrella hat not unlike the one worn by a man seated in the crowd of the basketball game in "Swish Swish."

The spinach drink that is given to Backpack Kid (aka "Pack-Man") is reminiscent of Michael's Secret Stuff, which Bugs Bunny uses to inspire the Tune Squad in Space Jam. It also might serve as a call back to the Popeye the Sailor cartoons in which Popeye is known for growing stronger with the help of a can of spinach.

There are a couple of different iconic kisses in Space Jam that this kiss between the referee and Molly Shannon (playing a coach for the Tigers) could be referencing. Bugs Bunny really gets around in the movie, kissing Lola Bunny as well as an unsuspecting Jordan.

See? There are several subtle hints that show Perry was likely inspired by, if not directly imitating, Space Jam. In case you don't have enough reasons to keep watching "Swish Swish" on repeat, spotting references is as good as any.