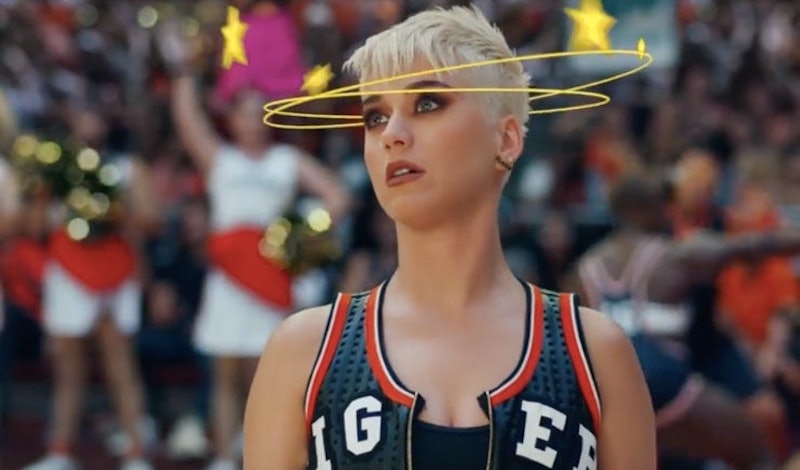 As fans weigh in on the recent release of Katy Perry's "Swish Swish" music video, one thing that keeps coming up are all of the meme references in "Swish Swish." The video, in which Perry appears to make fun of herself, is full re-enacted meme scenarios that will be familiar to anyone who spends way too much time on the internet. Don't get me wrong. Nick Minaj's game saving halftime performance is still the biggest highlight of the video. But the meme references are worth a second look, too.

The single, which was initially thought to be a direct jab at Perry's longtime frenemy Taylor Swift, took an unexpected turn in its video form. The singer opted to focus more on her own shortcomings through a compilation of meme re-vamps as opposed to honing in on the beef with Swift.

Since the video's Aug. 24 release, the denizens of the internet have been clear about their thoughts on the recycled content from the playful visual and their reactions are, no doubt, hilarious. As chatter surrounding the new video continues to circulate, delve into the some of the video's must-see meme tributes. There are quite a few references that you certainly won't want to miss.

In an homage to the Michael Jordan crying face meme, Perry finds her face to be the subject of the crowd's ridicule amidst her performance in the dismal game.

In a copy of the ubiquitous shooting star videos, made famous by the Australian electronic duo Bag Raiders, Perry blasts off into outer space during one scene in the video.

The visual also features the viral moves of dancing sensation Russell Horning, aka "Russell Got Barzz," who also happens to be a teammate of Perry's during the ball game.

At one point Perry balls so hard that she literally falls flat on her face, a moment that is similar to the viral memes of fans who have attempted and missed making shots off of a trampoline during NBA games.

The stars around her head after she gets hit with a ball are a callback to classic Looney Tunes, which brings us to...

After Nick Minaj's mid-game pep talk, Perry finally manages to score some points with an enhanced move that appears to possibly be a nod to Michael Jordan's Space Jam dunk.

Memes aside, Perry's "Swish Swish" has garnered a lot of attention since its release on Thursday morning. We'll see if the singer can keep this momentum going into her hosting gig at the 2017 MTV VMAs on Aug. 27.