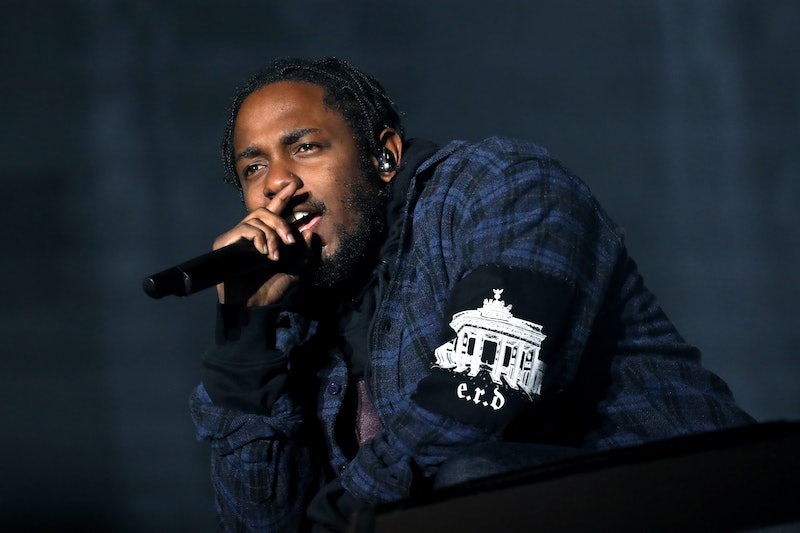 I know that right now you're currently obsessing over the release of Kendrick Lamar's new album, DAMN., and, by all means, continue, guys. It's absolutely stunning. But just be sure to catch your breath between songs, all right? You're going to need to stay chill for what I'm about to say. There are rumors that Lamar may be releasing a second album on Easter Sunday, and, honestly, the evidence all adds up for it. Immediately after it was was dropped, fans on Reddit were already speculating about supposed evidence that Lamar plans to release a second album. Get the cork board and some red string out guys, because this conspiracy goes deep.

But, before we dive head first into that bottomless rabbit hole, there's some important background worth knowing about. First, there's the fact that Lamar has some deep Christian beliefs, something that he's been outspoken about throughout his career. When you couple that with the fact that DAMN. was released on Good Friday (aka the day that Christians believe that Jesus Christ was crucified), then a companion album to DAMN. being released on Easter Sunday (the day of Jesus Christ's resurrection) would be highly significant.

As you may have noticed if you've listened to the album already, DAMN. starts and ends with Lamar's death. So, to release a second album in which his persona may rise from the dead, on the same day as Jesus Christ did, harbors some heavy poignancy.

But, these are just the foundations of the theory, my friends. To truly understand why the internet is currently blowing up over this right now, you need to see the evidence in full.

These Lyrics From "The Heart (Part 4)"

Considering the potential for a double album, the line, "dropped one classic, came right back" as heard on "The Heart (Part 4)" now takes on a totally new meaning. On the same song, Lamar also rapped, ""my next album, the whole industry on a ice pack… with TOC, you see the flames."

There are a few important things to unpack here. The first is that, with "ice pack" and "flames," Lamar is instantly evoking the colors blue and red. Which then makes the phrase "TOC" make sense as meaning "the other color." What's interesting, however, is that the way the sentence is phrased. It implies that a "blue" album would be coming before a "red" album. However, DAMN. is here, and it clearly shows Lamar stood in front of red brick. Thankfully, though, there's another theory to clear that right up...

This Theory About The Potential "Double Album" Names

God Damn, guys. It could be quite the double album name. And it would make absolute sense.

These Tweets From Sounwave, Lamar's Producer

Not only is Sounwave straight up telling us that we should be expecting something more with this tweet, but there's also something else to how the sentence has been phrased. Is Sounwave basically reworking a Matrix quote, here? And then you realize that, sweet mercy, yes he is — and everything else falls into place:

In The Matrix, remember, Morpheus offers Neo two pills. And what colors are they? Red and blue. Oh, yeah, and there's also the fact that many fans of the movie believed that The Matrix featured religious allegories to Jesus Christ in the story. So, I'll just leave that one with you.

As previously mentioned, DAMN. features a red background. However, shortly after Sounwave published those tweets, Lamar's Spotify profile changed to the one above. And, yep, it features blue bricks, guys. BLUE BRICKS.

Including This Two Tone Background

I mean, that straight up screams "double album" to me. Still not convinced?Consider the fact that DAMN. may be the album in which Lamar is steeped in sin, and darkness, and that a second album could be the reborn parallel to it. Can't you imagine the track list for such an album featuring the flip side of this image? If a second is released, then I'm absolutely convinced it'll feature a track list showing Lamar stood in front of the white background instead.

Seriously, take a really close listen to the backwards lyrics on "FEAR.," because you'll be able to hear some potent, religious imagery evoking Jesus bleeding and getting stoned to death on the cross. There are definitely lines that sound like Lamar is saying, "Why God do I have to suffer?" and "Why God do I have to bleed?/ Every stone don't hit you, resting at my feet."

Lamar is headlining Coachella on Sunday. While it would be enough for most artists to simply release an album on the Friday and perform such a large performance on the Sunday, it could be the case that Lamar has bigger plans in mind. Specifically, it would also makes sense alongside the theory that the rapper may have flipped the script on his album release plans, in order to do a live "resurrection" on Sunday that coincides with the second, potentially "blue" album that may be getting released. We know that Lamar can put a hell of a good show, and this would provide him with the perfect conceit to pull off something extra special for fans.

Obviously, at this point it remains only speculation that DAMN. is the first release from a soon to be revealed double album. But I think I speak for everyone when I say that, judging from the evidence complied above, if does turn out to be true, then it will be really something to behold.