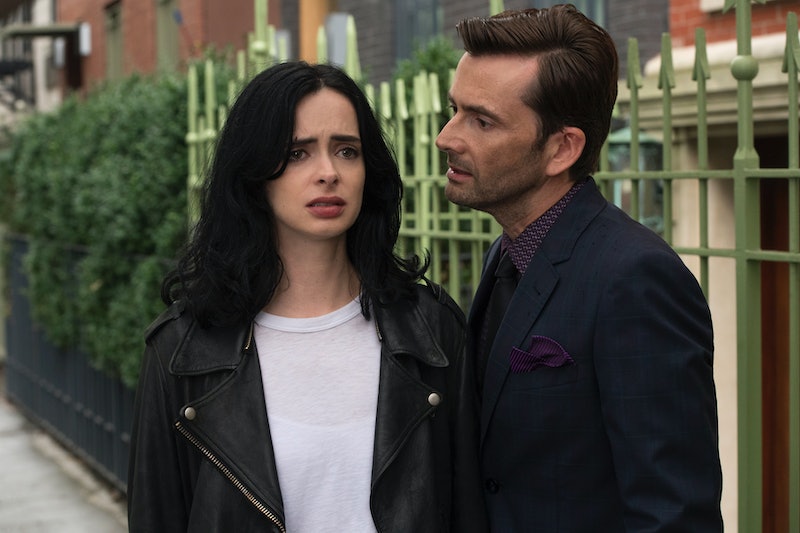 The great Marvel/Netflix experiment lasted only four years, kicked off in 2015 by Season 1 of Daredevil and ending this month with the third season of Jessica Jones. The latter series brought us one of the franchise's most compelling villains… but will Kilgrave be in Jessica Jones Season 3? Or have viewers already seen the last of David Tennant's terrifying psychopath?

Of course, fans will remember that the telepathic Kilgrave met his demise in the Season 1 finale, with Jessica Jones overcoming his mind control powers long enough to get close to him and snap his neck, thus ending his reign of terror. But death didn't stop Kilgrave from coming back once — so what's to stop him from coming back again?

In Season 2, Kilgrave reappeared towards the end of the season, literally haunting Krysten Ritter's superhero after she took another life, accidentally killing a villainous stooge in self-defense. Her tormentor's ghost whispered in her hear, trying to get her to give into her worst impulses, attempting to talk her into killing her Season 2 nemesis, Karl Malus (the man who gave Jessica her powers). In the end, Jessica exorcised her demon by choosing not to kill Malus, and Kilgrave vanished once again.

But is he really gone for good this time? Or is there a chance he could resurface to haunt Jessica and viewers with his charismatic villainy once again? There's no sign of Tennant anywhere in the Season 3 trailer, but that could just be an attempt to hide a surprise return. In February, showrunner Melissa Rosenberg herself seemed to indicate that her show wasn't done with Kilgrave just yet. After a fan tweeted a goodbye to the character, she responded ominously: "Not quite yet!"

However, just one month later, Tennant seemed to directly contradict Rosenberg's tease. In an interview with Entertainment Weekly about the show's cancellation, the actor confirmed Kilgrave would not appear in Season 3. So what happened? Did plans for Season 3 change drastically in the few weeks between Rosenberg's tweet and Tennant's statement? Did Rosenberg plan to include Kilgrave in future seasons past Season 3, and those plans were cut short when Netflix cancelled the show, making the upcoming third season the last? Or, perhaps, did Tennant's commitment to another show — Good Omens, which premiered on Amazon on May 31 — cause a schedule conflict with Jessica Jones at the last minute?

Fans may never know exactly why Tennant isn't involved in Season 3… but at least his character was given a fitting end. There isn't exactly a lingering cliffhanger around Kilgrave; Jessica has now vanquished him twice, once in the flesh and once again in the spirit. While it would have been fun to see Tennant sink his teeth into the juicy role a third time, another surprise return for the villain may have ended up feeling a bit extraneous. There is such a thing as too much of a good thing, and maybe it's time to let Kilgrave rest once and for all.

It's not like viewers can't get their fill of Tennant being devilish elsewhere, as the actor portrays a literal demon on the aforementioned Good Omens; one who teams up with an angel played by Michael Sheen in an attempt to avert Armageddon. And it's not like Jessica Jones won't have her hands full without Kilgrave around, since Season 3 is introducing a brand new villain: Gregory Salinger (Russian Doll's Jeremy Bobb), a criminal mastermind who looks to be very much the Moriarty to Jessica's Sherlock.

It'll be hard for Salinger to fill Kilgrave's purple shoes as Jessica's primary antagonist — but then again, it would be hard for anyone to follow up Tennant's deliciously twisted performance. As long as Salinger proves a worthy adversary to Jessica and helps to send the series out on a strong note, fans hopefully won't spend all of Season 3 wondering when Kilgrave will arrive.