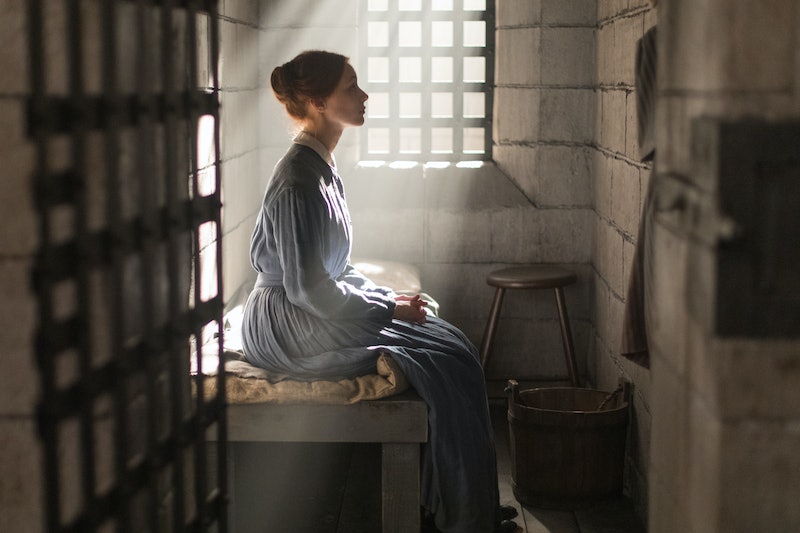 If The Handmaid's Tale is terrifying because it takes place in a world that could be ours, then Netflix's new Margaret Atwood adaptation is even more terrifying because it takes place in a world that actually was ours. Yes, Alias Grace's Kingston Penitentiary is a real place, and Grace Marks was a real prisoner there. Atwood extrapolated upon the convicted murderer's story (she was later pardoned) to craft the fictionalized biography that is her 1996 novel Alias Grace, adapted to the screen by Oscar-nominated writer Sarah Polley (Away From Her) and director Mary Harron (American Psycho). Little is known about the real Grace Mark's life — but much more is known about the prison in which she found herself incarcerated.

Kingston Penitentiary is located in the town of Kingston, Ontario; opened in 1835, the prison actually predates the founding of Canada as a country by several decades, and it remained the country's oldest and most notorious maximum security prison until it closed its doors for good in September 2013. Designated a National Historic Site of Canada in 1990, the sprawling complex still stands today, and — after being closed to the public for almost 200 years — is now open for tours during the summer months, from June through October every year.

Before Atwood chose to write a novel about one of Kingston Penitentiary's most mysterious inmates, the prison actually attracted the eye of a couple other famous authors. According to the Visit Kingston website, Charles Dickens paid a visit to the jail in 1842 and wrote about it in his ensuing travelogue, American Notes For General Circulation. "There is an admirable jail here, well and wisely governed, and excellently regulated, in every respect," the famous Brit opined. "Here at Kingston is a penitentiary, intelligently and humanely run." Almost a century later, on Sept. 11, 1923, Ernest Hemingway also had cause to pay the penitentiary a visit, when he was sent there to cover a jailbreak on his first day on the job as a reporter at the Toronto Star.

Despite Dickens' somewhat, well, Dickensian description of the Kingston, it was not generally known as a pleasant place to be for its inmates… many of whom were children. According to CBC News, there were prisoners as young as eight years old held captive within the Penitentiary's walls — such as Antoine Beauche, who was sentenced to three years and, during that time, "received... 47 corporal punishments [the lash] in nine months, and all for offenses of the most childish character," including such prohibited behavior as talking to other inmates, looking at other inmates, winking, nodding, or laughing.

Polley and Harron were committed to depicting the realities of this institution. If the setting of Alias Grace looks and feels authentic… that's because it is. The miniseries, produced by Canadian network CBC Television, was allowed to film scenes on location within the Kingston Penitentiary itself, according to the Kingston Herald. Star Sarah Gadon (11.22.63) documented her time within the prison through a series of Instagram posts; in one photo, you can see the bars of the cell in which Grace sits in one of Netflix's official promotional photos (at top).

According to the Kingston Herald, many local Kingston residents were employed by the production as extras, and further location shooting took place in the Warden's Residence across the street from the prison — now the home of the Correctional Service of Canada Museum. (In Atwood's story, Grace is hired out as a domestic servant to the warden of the Penitentiary during her time in Kingston.)

Given that history has largely erased the story of the real Grace Marks, Atwood was forced to invent an inner life for the complicated woman; fortunately for the production, the facility in which Marks was confined needed no such invention.

Check out Bustle's spooky 'What's Up, Boo?' series and other videos on Facebook and the Bustle app across Apple TV, Roku, and Amazon Fire TV.