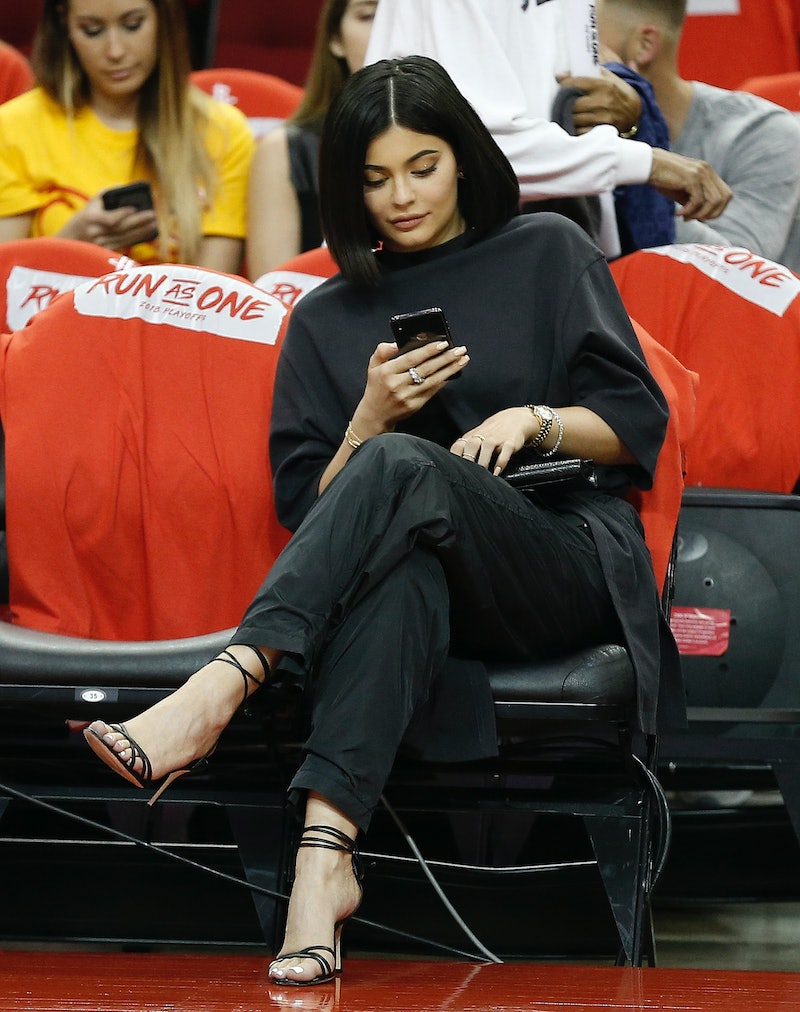 Although it seems like exactly 84 years ago, it's only been a single year since Kylie Jenner and Travis Scott broke the internet by announcing the birth of their daughter on Super Bowl Sunday 2018. Funny how time flies, right? Given that Scott is marking the anniversary of Stormi's birth by performing at the 2019 Super Bowl halftime show with Maroon 5 and Big Boi, it only stands to reason that his family would be there to support him. But alas, Kylie Jenner isn't at the 2019 Super Bowl. Instead, she seems to be home watching the game with Stormi, judging from her most recent Instagram post.

To be honest, fans were really expecting her to show up in some capacity. She was posting on Instagram all weekend and it sure looked like she was in Atlanta. On Saturday night, she posted an Instagram Story with her and friends Jordyn Woods and Victoria Villarroel Gamero out on the town, although it was hard to tell where she was aside from the back of an SUV. She also posted a #latergram of her and Scott on a stairwell, which seemed like a way of saying to the world, "We're together and I totally support him this weekend, even if I'm not there."

But then, just after the halftime show, Kylie posted an adorable video of Stormi standing in front the of TV while Scott performed. Again, the TV could very well be in a private suite at the stadium or something, and the video could have been taken by a sitter, but it sure seems like they weren't at the stadium for the game.

It's also really on brand for Kylie to avoid huge crowds. Although she has a bajillion followers on social media and grew up on reality TV, Kylie can be pretty private about her life, and she's spoken about not enjoying some aspects of fame in the past, and being recognized by literally everyone is one of them. Aside from some random basketball games and Met Gala appearances, fans rarely get to see her out in the real world. Skipping the Super Bowl makes sense for her.

Remember, it was just last year that Kylie's relationship status with Scott was a total mystery, with some fans (this writer included) even doubting that they were still together. They like to keep things on the down low as much as possible.

That being said, these days, fans are much more in the loop about the couple, thanks to Kylie's almost daily Instagram posts about her baby girl, often with Scott milling around in the background or bouncing Stormi on his knee. Even Scott has been more open about his life with Kylie since his daughter's birth.

On Stormi's birthday just this past Friday, Scott posted an adorable collection of photos of his daughter — and one with him and Kylie, which made the post all the sweeter. They're just one big happy family these days. And there's been some speculation that the couple would make their love more than just Instagram official at this year's game, too.

Given Scott's performing at the halftime show and some of his recent comments in the media that he and Kylie are planning to get married in the nearer-than-ever future, some fans were convinced a proposal would come later Sunday night. After all, since the couple made pop culture history last year by dropping their birth announcement video on Super Bowl Sunday, it stands to reason that the day has some importance to them now. However, a proposal didn't happen during the halftime show, even though it seemed like it could be likely.

In any case, we can't wait to see the photos and videos Kylie posts from her weekend — we'll certainly be holding tight for them!