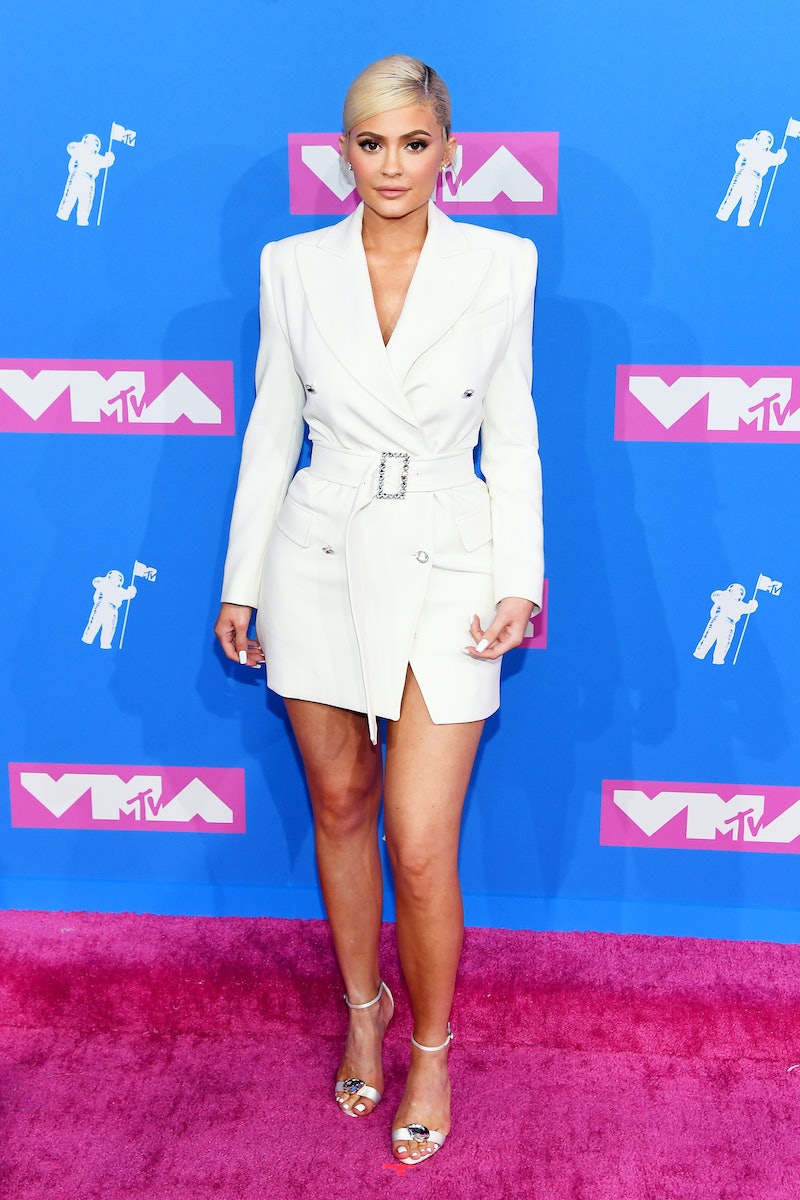 When it comes to keeping the terms of her private life private, it's no secret that Kylie Jenner is basically a bona fide mastermind. And, as far as hiding in plain sight is concerned? Yeah, Kylie pretty much wrote the rule book on that one, too. So it's no surprise that Kylie Jenner's new Instagram Story about Travis Scott, which seems to suggest the pair is at least happily committed and making some serious plans for the future, has her followers on high alert.

After all, if there's anyone who understands the full extent of Kylie's capacity for keeping major life milestones under wraps (or just enough under wraps to keep people guessing, anyway), it's her fans. And, given that those same fans were left almost entirely in the dark about Kylie's first pregnancy last year — despite the fact that Kylie periodically interacted with them on social media during that time — it makes sense that they're keeping an eye out for any inkling of another Stormi Webster-sized secret brewing behind the scenes.

The hubbub first picked up Saturday night, Oct. 6, after Kylie loaded up her Instagram Story with footage of her man performing on Saturday Night Live. In a bold-faced caption overlaying the evening's first IG video, which sees a zoomed-in shot of the rapper in the middle of his set, Kylie wrote, "hubby," followed by three heart-eye emojis. Naturally, the post stirred up some serious speculation from fans, some of whom were wondering if this was just Kylie's clever way of letting them know that she and Scott had secretly gotten married. Or, alternatively, are at least thinking about it.

In typical fashion for Kylie, the social media savant didn't offer her IG following any context as to the meaning behind that particular caption, if any. (Much as fans of the couple might like the idea of a secret wedding, it does seem equally possible that Kylie's IG Story caption simply made use of a sweet, romantic pet name for her partner.) But, while the internet might not have answers to the "hubby" question just yet, Kylie did talk more about her relationship during a Snapchat Q&A with her longtime friend, Jordyn Woods, a bit later on Saturday evening.

Those who watched the Q&A know that the official status of Kylie and Scott's relationship (i.e. Are they dating? Engaged? Married?) didn't come up during that conversation. But Kylie did talk quite a bit about her personal plans for the future. And, while she might not have said this to Woods specifically, it does sound like Kylie is making those plans with Stormi's dad in mind. Speaking to Woods about whether or not she's going to have another baby, Kylie said she wants to, although the question of exactly when remains up in the air. "I'm definitely not ready right this second," she told her pal, which makes sense, since Stormi was born less than a year ago.

Still, judging by the rest of her comments to Woods, it really does sound like Kylie's already given Baby No. 2 quite a bit of thought. "Have I thought of baby names for my next baby?" said Kylie during the Q&A. "I have, but I haven't found anything that I love love," she continued, but added that she "definitely [wants] another girl, hopefully." Of course, just because Kylie might be thinking about adding a new member to her growing family doesn't necessarily mean that she'd want to embark on that journey with Stormi's father for a second time.

That said, after hearing her seriously heartwarming comments to Woods about Scott and Stormi's father-daughter bond, it definitely sounds like the two are closer than ever. Speaking about what Stormi's personality is like during the Q&A, Kylie revealed that her daughter, in a lot of ways, is just like dad:

"They have this crazy connection and she's definitely a daddy's girl ... When dad's around, [it's like] I'm not even there."

And, wow, anyone else currently wishing they had access to some of those home videos? For those still hung up on the marriage question: It seems, much like last year's enduring pregnancy question, this one will answer itself in due time. Until then, you'll just have to settle for Kylie and her "hubby" (whatever that means) continuing to be loving partners and parents in the meantime.