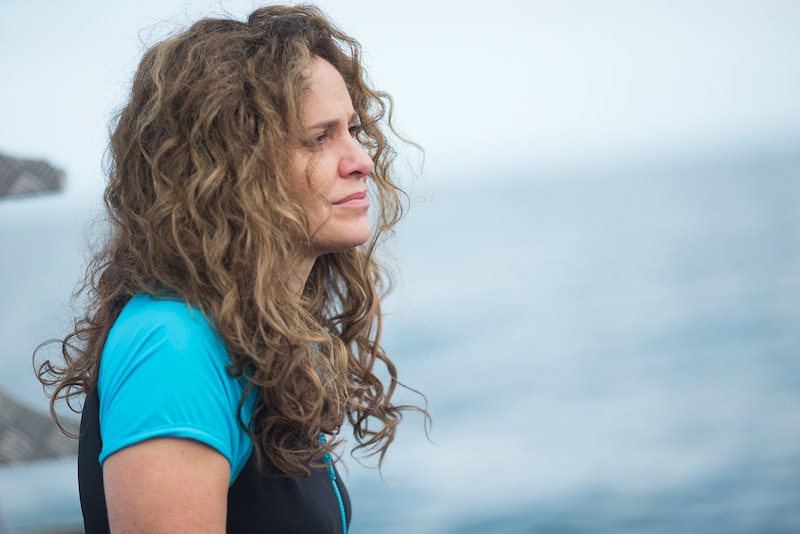 With only two episodes left in its run, TV's most rapture-ous drama is starting to rack up a body count. Is Laurie Garvey actually dead on The Leftovers? Viewers should've gotten a hint that something was about to go wrong when the song under the title sequence in this week's episode, "Certified," was "1-800 Suicide" by the Gravediggaz. But I don't think anyone expected the hour to end with Laurie deliberately descending to her own watery death via scuba diving "accident."

Laurie gets the idea from Nora earlier in the episode, when the DSD agent rebuffed the idea that her obsessive quest for the LADR device meant she was suicidal. If she really did want to kill herself, Nora explained to Laurie, there were a lot simpler ways to do it than putting herself through a radiation gizmo… like staging her own drowning while on a scuba diving expedition.

This wasn't the first time Laurie tried to end her own life, either. In an extended flashback that opened the episode, viewers saw Laurie shortly after the Sudden Departure. Back then, the therapist was driven to self-harm by a combination of her inability to help her grieving patients (including the woman at the laundromat in the series premiere), as well as her own very raw grief over the unborn baby that vanished from her womb on Oct. 14. But when Laurie couldn't go through with the attempt, she joined the Guilty Remnant instead.

As Laurie sits on the boat at the end of the episode, about to dive in, she receives a phone call from Jill and Tommy about a trivial matter. On another show, this unexpected intervention might have led Laurie to change her mind; but this isn't another show, and the episode ends with Laurie plunging into the waters off the coast of Melbourne. There is room for some ambiguity: will Laurie actually go through with her plan this time, or will she change her mind like she did in the flashback?

Laurie isn't the only character whose fate is up in the air heading into the final two episodes, either. Nora has finally given up on the charade that she's running a sting and is going to turn in the doctors once she catches them; instead, she makes it clear that she fully intends to go through the device herself in an attempt to reunite with her children.

And while she's tracking down the device, her ex-lover is coming to his own decision to end his life: Kevin is going to let his father and Grace drown him, in the hopes that he can find Christopher Sunday in the afterlife and get the final piece of the song, so that Kevin, Sr. can sing it an prevent the great flood from coming. But whether Kevin's powers of resurrection will work outside of Miracle remains very much unknown…

Is Laurie actually dead? Will Nora really go through the device? Can Kevin survive his next brush with death? Things on The Leftovers have never been more perilous as they are now, with only two episodes left to go and the clock ticking down to the apocalypse.

More like this
Here’s When 'She-Hulk' Takes Place In The MCU
By Brad Witter
How Marvel’s 'She-Hulk' Changes Her Comic Book Origin Story
By Brad Witter
Here’s Why 'Pretty Little Liars: Original Sin' Season 2 “Won’t Be The Same”
By Kadin Burnett
'Better Call Saul’s Co-Creator Explained Jimmy & Kim’s “Happy Ending” In The Finale
By Brad Witter
Get Even More From Bustle — Sign Up For The Newsletter