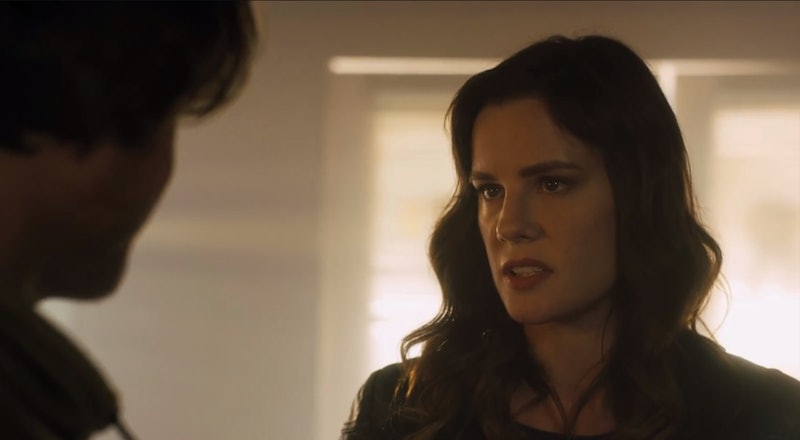 Lifetime is back at it again with another flick for a Friday night on the couch. The network’s upcoming film debuts on Oct. 19 and although Left for Dead is not based on a true story, it has an incredibly twisty plot that will give you an adrenaline rush.

According to Lifetime’s synopsis, Left for Dead stars Cheslea Hobbs as Lauren Carlton, a mom whose life is forever changed by a terrible car accident. She temporarily loses her memory but realizes that something is amiss after she starts recollecting bits of her past, including details about the accident and her daughter. Now, she has to help the police find the missing girl and bring the men responsible for this incident to justice. Yep, this definitely sounds like a typical Lifetime movie.

Left for Dead’s trailer gives a little more context to Lauren’s plight and builds a ton of intrigue. It starts off with Lauren being a total mom as she gently scolds her daughter to hurry up so they can get on the road. Lauren is driving when another vehicle suddenly appears in front of them and forces her to hit them on their passenger side. They didn't appear to be going very fast, but she loses control of the car and crashes into a nearby hill while the other driver pulls up.

He’s wearing a ski-mask in the middle of the day (because that's totally normal) and yells “See you in hell!” as he throws a lighter on the car. Well, that escalated quickly. The car explodes but somehow Lauren somehow wakes up in a hospital with no visible burns on her body. However, Lauren has suffered complete memory loss to the point that she doesn’t know her own name nor realize that her daughter is gone.

A strange man (Mark Famiglietti) who suspiciously sounds like the masked drive appears and claims to be her husband. The hospital staff actually allows this poor woman to go home with this guy, which is super odd because it seems like he would have to have proof of their relationship, right? Did Lauren not carry any form on ID? What is happening here?!

Surely someone she knows like a neighbor, friend, or co-worker would have pieced together that Lauren and her daughter are MIA and notified the authorities. It’s all very weird, but it is a fictional tale for entertainment so there’s no need to over analyze the details.

Things begin to take a turn in the clip when Lauren starts to remember that she has a daughter. She’s then seen with another man (William McNamara) who is presumably the second kidnapper and he says he will take good care of her child. Lauren replies “Like hell you will” while giving him a scathing look to end the preview. This whole movie is everything that Lifetime fans crave – lies, drama, and a high-stakes situation involving a woman who’s not afraid to fight to the death.

These guys have clearly messed with the wrong momma and it’s probably going to end badly for them because that’s how Lifetime movies roll. See how it all goes down on Friday at 8 p.m. ET as Lauren fights to reclaim her daughter.

More like this
'Black Bird' Subject James Keene’s Book Helped With His “Redemption”
By Brad Witter
'Bridgerton' S3 Teases Exciting Social Season For Penelope Featherington
By Bustle
It May Be A While Before 'All American' Season 5 Drops On Netflix
By Grace Wehniainen
How Is The British Royal Family Related To The Romanovs?
By Karen Fratti
Get Even More From Bustle — Sign Up For The Newsletter