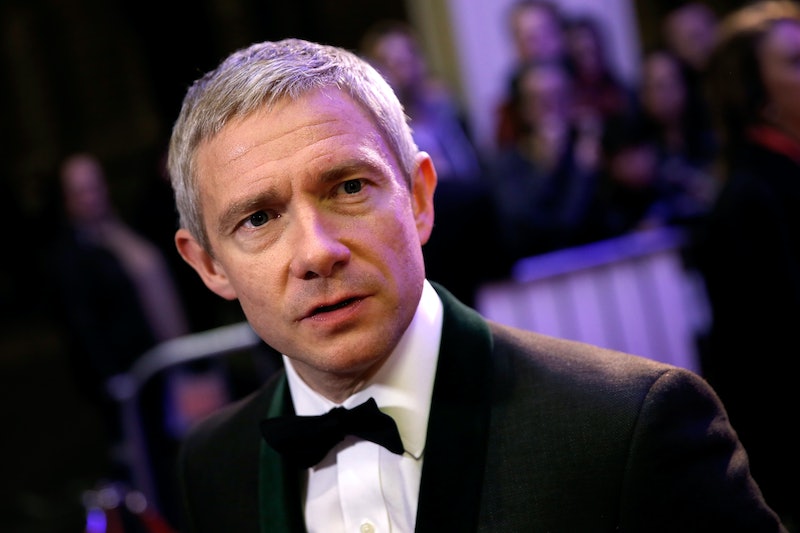 While it seems as though the fifth series of Sherlock has seemingly entered a mysterious void, Benedict Cumberbatch and Martin Freeman have certainly not been short of work. Freeman especially, as he's returning to telly tonight thanks to ITV crime drama A Confession. The actor has been pretty busy this year filming the harrowing six-part series, but what has he been doing outside of acting? Is Martin Freeman married?

As The Telegraph reports, Freeman was in a relationship with fellow actor Amanda Abbington before they split in December 2016. The couple never married, but they had two children and had been together for 16 years. This also happened to be when the two were staring opposite each other as husband and wife on Sherlock. "By the time of the last Sherlock that we've done we were sort of in the midst of splitting up, so that wasn't much fun, but when we weren't in the midst it was great," he said during an interview with BBC Radio 4's Desert Island Discs.

Despite their split, the couple has remained close friends and have a tremendous amount of respect for one another. "I always knew that people who split up can be civil and do it for the kids, it's all right," Freeman continued. "I didn't only want to be civil for the children, I wanted to be civil for us, because when you've loved someone for that long and they have been such an integral part of your life, what — that is supposed to not count now?"

He continued: "That just didn't make sense to me, so we do we get on well and I think the kids see us getting on well, they are just loved by the same two people in different geography now."

Abbingdon also talked about the reasons behind their split, which included both actors being apart due to conflicting filming schedules. "We've been apart a lot, and I think that's one of the reasons it happened," she continued. "You can't be away from people for too long, because you start to function on your own, you get used to being separate. You lose the connection and lose sight of it, in the end."

As previously mentioned, Freeman is now starring in A Confession, which has provided him with a very challenging role of playing a real-life figure: Detective Superintendent Steve Fulcher, who, in 2011, broke police protocol in an attempt to get a confession out of a suspected killer.

"Before you even realise it you are thinking, how would I have acted?" the actor said during a recent interview with the Guardian. "I was hit by what a very high price Steve paid, and is still paying, for doing something, although not legal by every letter of the law, that you would be hard pushed to find anyone to say was terribly wrong."

The series was also a chance for Freeman to show off his acting chops, and further prove that he wasn't a one-character actor. "When I was 30, I did have a fear of being locked in. I could easily have made a career of just doing lovable schmucks next door," he said. "Although Watson is an intermittent long-runner, on the whole I have managed to keep moving."