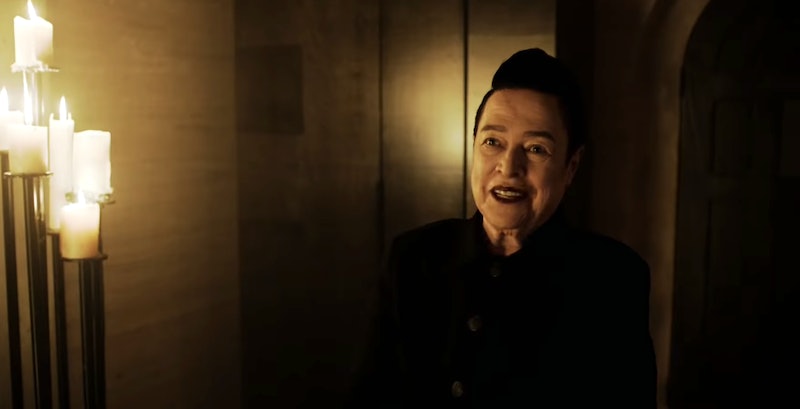 Spoilers for American Horror Story follow. You may have been distracted by the return of the Rubber Man during "The Morning After" episode, but the final moments highlight how you should have been focused on what Mead is on AHS: Apocalypse. After Timothy shoots her, Kathy Bates' Ms. Miriam Mead is hurt, but not in the way you'd expect. Rather than pierced flesh and blood, Mead has wires hanging out of her torso. Mead certainly appears to be a robot and her short-circuiting proves that there are way more things to be worried about during the Apocalypse than an Antichrist and his Rubber Man visions.

Ms. Mead assists Sarah Paulson's Ms. Wilhemina Venable in running Outpost 3. This location established by the Cooperative is presumably the only surviving compound following the apocalypse. Langdon says the people in the three other U.S. ones and the six international ones have most likely all been killed and eaten by people who managed to survive the nuclear attack. Perhaps one of the reasons that Outpost 3 is still around is because of Venable's strict rules, but Langdon says that these rules weren't technically sanctioned by the Cooperative. In particular, he takes issue with the rule forbidding sexual contact.

But the Cooperative's representative disapproving of this harsh law doesn't stop Mead and Venable from punishing people. So when Mead and Erika Ervin's character (who appeared in Freak Show by her professional name Amazon Eve) find the genetically-gifted Emily and Timothy doing some post-coital cuddling, Venable's lackeys intend to kill them. However, Timothy gets the upper hand — after all, his genetics are allegedly superior — and he shoots Mead.

Mead flees the execution room and shows her gun wound only to the audience. A milky substance secretes from her torso that's full of wires, tubes, and blinking lights. Bates' tough character sure seems like a robot as her flesh-colored skin suit shows its damage. And while Ryan Murphy's American Horror Story has covered ghosts, aliens, witches, "freaks," vampires, more ghosts, and a cult of murderous clowns, robots are a first for the franchise.

While Langdon manipulating Evan Peters' Gallant into killing his nana (please come back, Joan Collins!) was also crazy, viewers know that Langdon is the Antichrist and can't be trusted. So this Mead reveal is the real game-changer of the episode because if she is a robot, who else is a robot? Could Paulson's Venable be one too? Langdon exposed Venable's back earlier in the episode, which is scarred and disfigured, so she could very well be human. But perhaps she put the no-sex rule in place because she's also a robot and has no need for things like fornication.

The twist already has fans on Twitter considering what this means for the rest of the season. Since Apocalypse will crossover with Coven, one fan theorized that Mead is really Madame Delphine LaLaurie's head on a robot body since that was Bates' previous character. Sure, it's a long shot, but stranger things have happened on AHS.

With robots in charge of Outpost 3, the surviving humans have more to be concerned about than they even realize. Yet, with the Antichrist being the one who will judge whether or not they are worthy to enter the Sanctuary, perhaps a couple of robots on humanity's side will turn out to be a good thing.