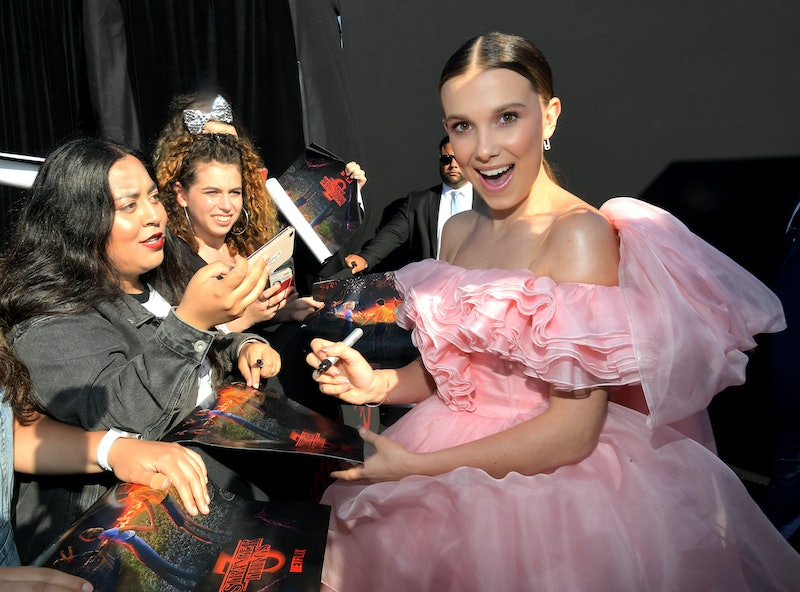 Long hair, don't care. Millie Bobby Brown has long, curly hair right now and it's unlike any look she's done before. Brown posted a photo while rocking a brand new mega mane on her personal Instagram on Aug. 2. In the shot, she debuted a tumble of defined, honey brunette curls. The look also featured shorter tendrils that framed her face and eyes. It was quite a drastic change, since fans are used to Brown rocking a long bob in her breakout role as Eleven in the Netflix series Stranger Things. The actor often has a similar lob in her personal life, which can usually be seen on her Insta feed. However, Brown's dramatic new 'do is for a another gig.

As Pop Sugar reports, Brown's long locks are for her role as the titular character in the upcoming film Enola Holmes, which is based on a book series that launched in the '00s. Brown plays the teenage sister of sleuth Sherlock Holmes. She is also serving in a producer capacity on the film since she is such a multi-tasking and multi-talented teen.

Brown also captioned the photo "I love you Enola" and hashtagged the character's name, which is further proof that her new look is for the role. The curly strands are either the work of a wig or extensions since this sort of length doesn't happen overnight. However, the subtle golden highlights look so natural — as though it were her real hair.

This shot of Brown as Enola Holmes should certainly get fans exited for the upcoming film, which is due out in 2020. Her minimal eye makeup and light pink lip balm provide a lovely contrast to those stunning and statement-making curls. While many celebrities are going under the scissors for major snips and ditching length in favor of structured bobs and playful lobs, Brown did the opposite. Even though it's for a role, her curly coif just might inspire you to discuss getting textured extensions next time you visit your stylist.

Earlier this year, Brown showed off another set of long locks. At the Beijing premiere of her film Godzilla back in May, Brown wore a high and golden ponytail on the red carpet. It was an unexpected and unforgettable look from her and paid homage to Ariana Grande's signature updo. Brown paired the pony with rosy makeup and a glamorous, floral frock by Valentino.

For comparison purposes, here's Brown with her signature wavy and light brown lob. It's the cut she is most associated with at this point in her career due to the fact that it's how Eleven wears her hair. By the way, the dance routine in this video is also awesome since it shows just how bouncy and lively Brown's hair is.

Ultimately, Brown's long and voluminous curls are likely a temporary style that she will shed once she is done filming. But they are also a potent reminder that she is one of the most amazing style stars of her generation. There really is no hairstyle — including a shaved head for Stranger Things — that she can't crush in real life or for a role.

More like this
Bella Hadid's Curly Blonde Bob Is Peak Marilyn Monroecore
By Audrey Noble
Blake Lively Debuts Red Hair For The 'It Ends With Us' Film Adaptation
By Olivia Rose Rushing
The Best Beauty Looks Spotted At Paris Couture Week 2023
By Audrey Noble
Hailey Bieber's New Bob Is Short Haircut Goals
By Olivia Rose Rushing
Get Even More From Bustle — Sign Up For The Newsletter
From hair trends to relationship advice, our daily newsletter has everything you need to sound like a person who’s on TikTok, even if you aren’t.