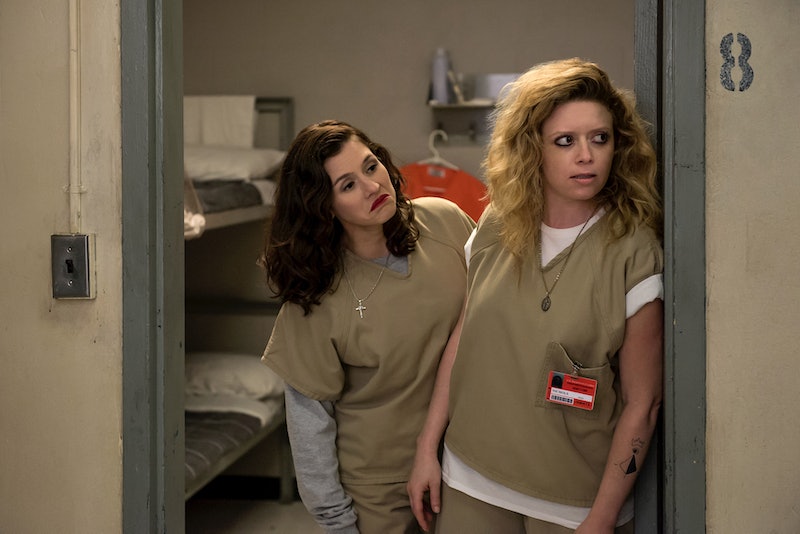 Everyone is struggling with something on Orange Is The New Black. Prisoners deal with addiction, abuse, oppression, and a great deal of things during their stays in Litchfield. Despite also having to deal with all the difficulties of prison, Morello's greatest struggle is completely unrelated to Litchfield — she struggles with reality itself. Morello creates a very different version of reality in her head that doesn't always match the reality of the world she lives in. Her latest personal reality is that she's pregnant — but is there a chance it isn't a delusion? Is Lorna Morello really pregnant on Orange is the New Black?

Almost immediately after declaring herself pregnant, Morello's best friend and former fling Nicky dismisses it as impossible. While many of Morello's paranoid thoughts seem to have very little basis (she went on one date with the man she believed to be her fiancé, she suspects her new husband Vince is cheating on her with her sister because the two of them spent time together once), she and her new husband did manage to consummate their marriage during a visit to Litchfield. So what is the truth? SPOILERS FOR SEASON 5 OF ORANGE IS THE NEW BLACK FOLLOW.

Morello's belief that she's pregnant seems to be the final straw for many of her friends and even her husband who runs away from her after she tells him she's pregnant. In an effort to prove herself to others, Morello manages to get her hands on a several pregnancy tests and takes all of them. The result is that Morello is absolutely, unambiguously, 100 pregnant.

This development is quite the surprise to just about everyone who isn't Morello, as those in Litchfield had gotten used to everything Morello says existing solely in her own head. Nicky, who had been especially critical of what she assumed wasn't true, apologizes for doubting Morello and Vince returns to help figure out what to do about his very real child. While there is a little bit of joy in Morello's own reality finally lining up with the objective reality of Litchfield, there is still a baby in her that needs to be accounted for that Morello needs to find a home for and someone to take care of it while she's in prison.

While Morello is excited to be a mother, there are many difficulties that come with trying raise a child when you're in prison and effectively can't be with your child. In Season 2, Morello declares that she has a little over two years left left before she's able to leave Litchfield, so her time may actually soon be up allowing her to be with her child, but even that doesn't solve some troubling aspects of Morello's impending motherhood. Morello's mental illness could impact on her own child, especially if the idealized version of motherhood that exists in her thoughts doesn't line up with reality. The future of Morello, Vinny, and their child is up in the air no matter if Morello is in prison or not. Here's hoping everything works out for the best.