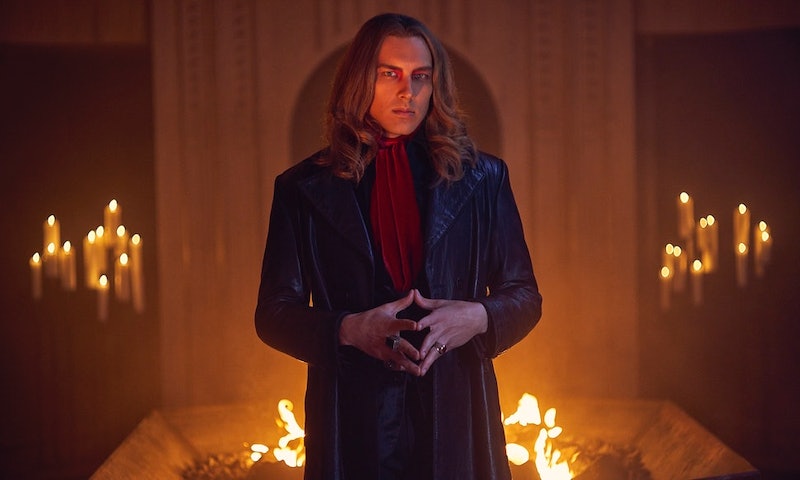 American Horror Story's "Return to Murder House" included some epic reunions (the Harmons! Constance! Moira! Oh my!) and provided some much-needed background about Michael Langdon's past — or perhaps more importantly, his intentions. However, the episode raised just as many questions as it answered, particularly in regard to how connected Michael may be to his childhood home. In fact, some fans have begun speculating that the Murder House on AHS: Apocalypse is an outpost, or maybe even the Sanctuary Michael has been recruiting for.

Ever since his arrival at Outpost 3, Michael has talked about bringing an elite chosen few to the so-called "Sanctuary," which can supposedly provide unlimited shelter from the apocalypse. He has yet to go into any detail about where this place is and why it's safer than any of the other compounds, but is it possible that he could be referring to the very place where his life began? It certainly seems possible, given how much the place meant to him during the earlier part of his life.

We also learned last week that Murder House was actually built on top of a portal to hell, which explains why he was so drawn to his childhood home (and how, as the Antichrist, he was even able to come into existence). If Michael's goal is world domination, it would make sense to bring his followers to his home base in order to kick off his devious plans.

Then again, just to play devil's advocate (pun very much intended), there's also the distinct possibility that a Sanctuary doesn't actually exist. Given everything that Michael's done in the past — i.e. committed multiple murders, eaten a beating heart, and obliterated a pair of innocent souls from existence — it's easy to assume that he's not above lying to others for his own selfish purposes. He could've just said there was a Sanctuary in order to make the other inhabitants in Outpost 3 turn on each other. What better way to weed out those who would do anything necessary in order to survive? Those could be the very types of people he's hoping to have in his corner.

Given that the entire season is meant to serve as a Murder House and Coven crossover, it's not out of the realm of possibility that we could return to Michael's old stomping grounds.

However, Episode 6 seemed to give so many of the house's ghosts closure, it felt like that part of our AHS journey is now all wrapped up. Tate and Violet were finally able to make amends; there could be hope for Vivien and Ben Harmon after all; Constance is enjoying some tea with her ghostly daughter, Rose; and Moira reunited with her mother. As much fun as it was to return, going back a second time doesn't feel necessary.

So, if there is a Sanctuary and Michael is true to his word and takes everyone there, it likely won't be a place swarming with ghosts. Well, at least not the ghosts that we've all come to know and love.