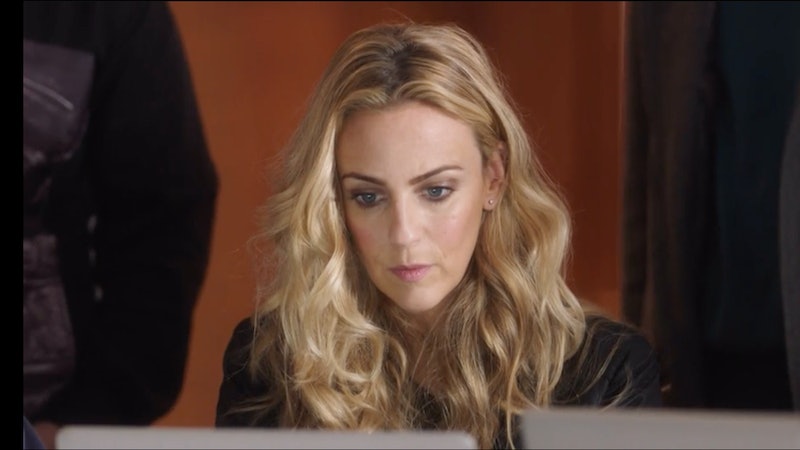 In Lifetime's original movie history, you'll find lots of stories about parents who would do anything for their children, including plenty that are based on real people who moved heaven and earth in order to protect their families. But is the latest Lifetime movie, My Daughter Is Missing, based on a true story? This film appears to be a fictional creation, but it wears its influences on its sleeve — most obviously, the 2013 film Taken. In an instance of gender parity, this time a mother is the one who will stop at nothing to find her missing daughter, and her "particular set of skills" are her cyber security expertise, which allows her to hack her daughter's way to freedom.

But even though My Daughter Is Missing isn't directly based on any real parent's ordeal, cybersecurity skills can apparently be useful when dealing potential kidnappers. Bryan Seely, a famous hacker and cyber security expert hacked the FBI and Homeland Security using Google Maps, according to Android Authority. He said he did so to expose what he perceived to be a security and privacy flaw, which was reportedly "quickly patched" by the company.

In January 2017, Seely claimed to Komo News that he saw his missing daughter in an ad on Backpage, a now-defunct website that hosted adult classified ads. "She’s had a drug problem off and on for a couple of years," Seely said. "I went and started backtracking anything I could find and started finding ads on Backpage [...] All I want to do is save her." (Seely's daughter would have been a minor.) According to CBSNews, Backpage executives deny allegations that the site facilitated sex trafficking. The Washington Times reported that in March, the Senate voted to cite Backpage.com for contempt for refusing to testify and impeding an investigation into alleged editing of ads.

There are other tragic examples of how cyber security expertise can be used to obtain information about a missing person. But My Daughter Is Missing is otherwise nothing like Seely's story; it's far more of an action thriller.

The Taken trend may have peaked somewhere around the time the third installment in Liam Neeson's old-man action franchise petered out when yet another member of his immediate family happened to go missing (instead, as it should have been, united Maggie Grace and Famke Janssen to team up and find a kidnapped Neeson!), but the idea of a "taken" kidnapped relative has stuck around as a familiar jumping off point for other films and TV. And, in addition to a TV adaptation of Taken on FOX, several other Lifetime originals have employed a similar plot. Recently, the network aired Are You My Daughter?, the controversial true-life adaptation Kidnapped: The Hannah Anderson Story, and Nanny Seduction, which all involved kidnapping.

But the plot of My Daughter Is Missing gets at a key part of the appeal of the Taken genre: the idea that the power of motherhood alone can be enough to spur a woman on to become an action hero. The movie doesn't have to be based on a particular true story to speak to the very real way parents wish they had the power to always protect their kids.

More like this
Where Is Dr. Cline Now?
By Morgan Leigh Davies
9 Honestly Unbelievable Revelations From The WAGatha Christie Trial
By Frances Stewart
UK Viewers Will Have To Wait To See Jessica Biel’s Killer Housewife Series
By Rachel Mantock
Don Crowder Successfully Defended Candy Montgomery, But His Story Ended In Tragedy
By Gretchen Smail
Get Even More From Bustle — Sign Up For The Newsletter