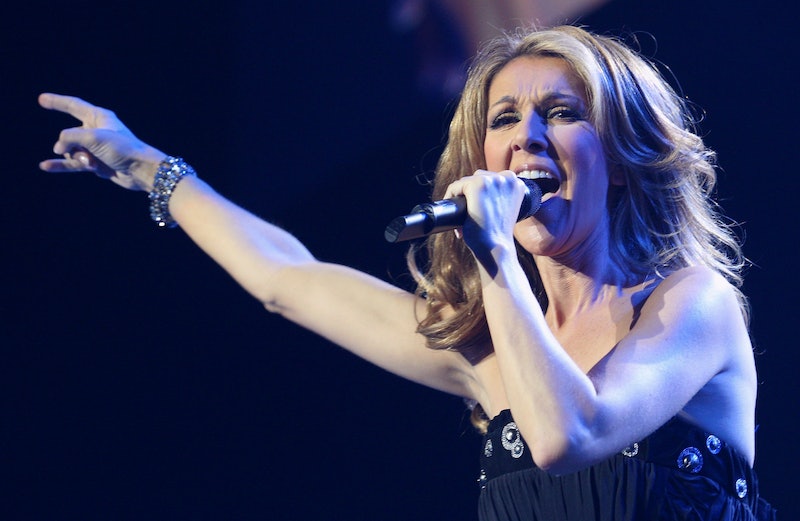 Near, far, wherever you are, it's likely that in the last 20 years you've witnessed someone singing Celine Dion's "My Heart Will Go On" at karaoke. Maybe, you were even the brave soul that tackled the epic ballad. But, is the Titanic theme actually a good karaoke song? Now that we've settled the debate of whether or not Jack could have fit on that door (Kate Winslet sure thinks he could have), this karaoke question is the most important Titanic debate left. So, in honor of the 20th anniversary of Titanic, I asked five karaoke DJs in New York City to give their thoughts on the matter and settle things once and for all. Naturally, these men and women have very strong feelings about the decades-old mega-hit.

It's "Good" For Karaoke If The Crowd's Into It

While the definition of a "good" karaoke song is different for everyone, for Rick Conti, a nine-year karaoke veteran who currently works Thursday and Friday nights at the Alligator Lounge in Brooklyn, any song that gets the crowd going gets the "good" moniker. "As a karaoke host, if [the crowd's] not happy and anxious to sing their own song," he says, "they’re not going to stay and I’m not going to make any money."

While his karaoke nights tend to be '90s parties where picking *NSYNC or the Backstreet Boys is a guaranteed crowd pleaser and early aughts rock bands like Jimmy Eat World are becoming the new standard, "My Heart Will Go On" is an every other week staple. "It transcends gender, and age. It is a timeless song," Conti says. "You get a group of girls singing it to each other. You get dudes singing it to show some kind of range. It’s fun."

Jared Gniewek, who hosts karaoke every Thursday night at the Branded Saloon in Brooklyn, agrees the song is fun, dubbing it a "1 a.m. classic." But it's the enthusiasm of the singer which ultimately decides whether or not "My Heart Will Go On" is a good karaoke song.

"It has the potential to be the greatest goddamn song ever written if the singer loves it enough," he says. "It's bold and simply structured while not repetitive. It has guts. I like that."

It's Better If The Singer Gets A Little Personal

Gniewek also likes when a performer "engages with it from a personal angle." Everyone might know the song, but that doesn't mean you have to sound just like Celine. In fact, he encourages performers don't. After all, that's what he would do; Gniewek is known to bring the house down with his own metal rendition of Dion's "It's All Coming Back To Me Now."

As for advice on how to nail it, Gniewek offers:

"Sing it hard. Scream it if you can't hit the notes. This is Celine f*cking Dion and nobody can do what she does musically. But you can channel the pure emotional depth of the icy Atlantic waters if you just go deep. Dive for that Heart of the Ocean and take a big breath. You're a dolphin now. A majestic f*cking dolphin of song. Own it."

It's Great For Being A Karaoke Show-Off

Breath control, according to Amethyst Valentino, who hosts three nights of karaoke at Montero's in Brooklyn, is the real key to nailing this song. "You have to open your mouth," she says over the phone. "You can’t be all tense, you have to let go and breathe."

She should know, since Valentino, who's been KJing for 15 years and sells her own jewelry on Etsy, often performs the song herself. "It’s good for my range and I like to show off sometimes," she says with a laugh, noting it's really why anyone chooses this song.

If You're Gonna Do It, Let Loose

The best way to impress Lord Easy, co-host of Karaoke Tremendous every Friday night at Union Hall in Brooklyn, is to just let go of any inhibitions. "You don't have to be the greatest singer but you have to be feeling it," he says. "In short, if you're feeling it, I'm feeling you."

He's not always feeling your choice of "My Heart Will Go On," though. "There might be some initial trepidation when that opening flute line wafts out of the speakers," Easy admits. But he's willing to give you the chance to show him you're the king — or queen — of the world with a performance that leans into the hilarity of choosing such an over-the-top song.

"I think you have to momentarily embrace the grandeur and enormity of the feels in the song," Easy says. "But then also step back and laugh at yourself. It's karaoke after all and taking yourself too seriously is one of the deadlier sins."

But No Matter What, A Ballad Is Always A Risk

The deadliest sin, though, according to Cassie J. Sneider — the manager for The Kings of Karaoke, which hosts weekly parties all over Brooklyn and Manhattan — is picking the ballad at all.

"It's a maudlin break-up song that gives you the visual of Leonardo DiCaprio slowly sinking beneath the ice," Sneider, who personally prefers to sing the high notes of Iron Maiden, writes over email. "I have never requested 'My Heart Will Go On,' but maybe I'll save it for election day in 2020."

It's safe to say Sneider — who's been KJing for five years, but an extreme karaoke enthusiast for almost 20 — is not a fan. In her opinion, the best thing about the five-minute song, which is a nightly staple at her karaoke, is that it allows her to take a bathroom break.

Whether karaoke hosts like Dion's song or not, though, they all agree that an engaging performance of the track can make the crowd go wild. "I’ve seen very many people just not do it any kind of justice and I’ve seen people crush it harder than Celine," Conti says. "It’s got some epic moments. You can't let the song intimidate you."

Being that it's a song everyone knows, "My Heart Will Go On" is a high risk, high reward karaoke choice that whether you're trying to rival Dion's version or reimagine it all together, you have to crush it. If you don't, you just might become the reason why everyone, not just the host, decides to take an impromptu pee break.