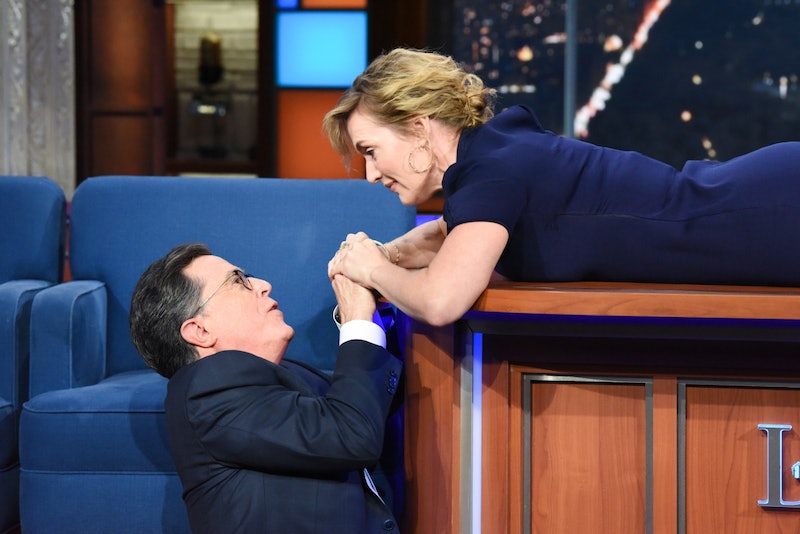 James Cameron may have recently double downed on the fact that Jack had to die in Titanic, but Kate Winslet has a different interpretation. While on The Late Show with Stephen Colbert, the actor discussed the upcoming 20-year anniversary of the film and she decided to give the movie an alternate ending. By reenacting the "never let go" scene, Winslet and Colbert proved Jack could have fit on the door and survived. She has said before that she believes Jack, played by her buddy Leonardo DiCaprio, could have lived, but with Colbert, she made that dream a reality for all Titanic fans.

Winslet was on The Late Show to promote her new film Wonder Wheel, which is controversially directed by Woody Allen. (Colbert avoided discussing the accusations against Allen with her.) Yet, she was also able to drop plenty of Titanic knowledge during her appearance since the movie returned to theaters on Dec. 1 for its 20th anniversary. She admitted that while Rose promised to "never let go" of Jack, she did let him go into the icy depths of the Atlantic.

"I lie, I fully lie. I hold my hand up. I let him go," Winslet told Colbert. But she thinks Jack has to take some responsibility for his own death as well. "He just should have tried harder to get on that door," she said. And with that, Colbert and Winslet demonstrated that two people could have fit on that door with a Titanic reenactment. "Come on, darling! There's room for two," Winslet cried, prompting Colbert to join her on his desk, which was subbing in for the infamous door.

While you think it might cause some tension, Winslet's and Cameron's opposing views on the topic of Jack haven't stopped them from working together again. As she discussed with Colbert, the actor is in Cameron's Avatar sequel. Plus, as previously mentioned, this isn't the first time Winslet proclaimed that Jack could have lived if he had joined her on the door. Before she said it to Colbert, Winslet told Jimmy Kimmel on his show in February 2016, "I think he could have actually fitted on that bit of door." And when she was being honored at the SAG-AFTRA Foundation's 2nd Annual Patron of the Artists Awards earlier in November, she confirmed again to Titanic costar Kathy Bates that she thinks Jack could have survived.

Along with making it clear where she stands on the whole Jack door debate (aka, Doorgate), she offered some other juicy trivia for Titanic devotees. She revealed that she had auditioned with Matthew McConaughey, who was up for the role of Jack, and that she and DiCaprio were spritzed with water to make them look so sweaty for their steamy car lovemaking scene. And while Titanic fans should have already known that Cameron was responsible for drawing Rose's nude picture, Winslet said that he sketched her while she wore a bathing suit. She also debunked the rumor that she got pneumonia from filming the scene in the water, clarifying that she actually got hypothermia. "You were really cold?" Colbert asked. "Yeah, I was really f*cking cold," Winslet replied.

Even with all of this insider scoop, the biggest Titanic takeaway (titanic Titanic takeaway?) from the entire interview had to be that two people could have physically fit on that door. So, sure, there's truth to Cameron's recent Vanity Fair statement that the door could only hold the weight of one person — otherwise, Rose and Jack would have probably both frozen to death. But for people who still feel like Jack Dawson didn't get the justice he deserved, Rose DeWitt Bukater is right there with you.