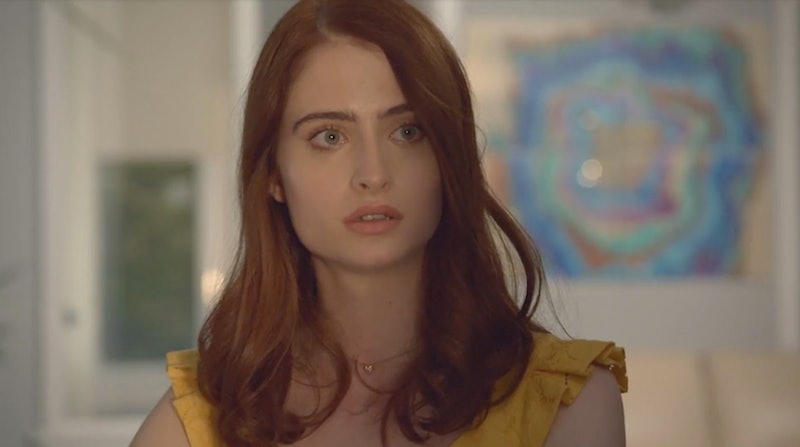 The bond that exists between a mother and daughter can be a beautiful thing. However, in the case of Lifetime's new movie My Mom's Darkest Secrets, that relationship can prove to be the stuff of nightmares. But while My Mom's Darkest Secrets isn't based on a true story, it will call to mind some of the other unusual (and downright unhealthy) mother-daughter dynamics that have existed throughout the history of cinema.

According to the official synopsis, My Mom's Darkest Secrets centers around 21-year-old Ashley Beck-Ford, who manages to track down her biological mother, Sara Hillman, online. However, this long-awaited reunion proves to be a far cry from a happy ending. Shortly after Ashley and Sara meet, Sara’s husband is mysteriously murdered, leaving Ashley to wonder if her mother had a hand in his death. But if that's the case, then how far will Sara go to make sure the truth doesn't come out?

The plot has all the necessary ingredients for any good Lifetime film: suspense, drama, over-the-top twists. And while it's not uncommon for mothers and daughters to keep secrets from one another on occasion, this particular storyline is meant to serve one purpose: to entertain the masses. The film is entirely a work of fiction, but if the premise is intriguing to you, there's plenty of other movies out there that explore a somewhat similar (and equally disturbing) journey.

Based on Christina Crawford's 1978 memoir of the same name, the film depicts the alleged abusive relationship that existed between Hollywood icon Joan Crawford and her adopted daughter, Christina.

Perhaps if her mother hadn't treated her so terribly, Carrie's experience with prom wouldn't have turned into such a bloody mess. Literally.

Flowers in the Attic

Based on V. C. Andrews' 1979 gothic novel of the same name, the movie centers around a mother locking her daughter and fellow siblings in the attic, which leads to some disturbing (and incestuous) consequences.

The 1975 American documentary film explores the daily lives of Edie Bouvier Beale and her mother, Edith, both of whom are eccentric relatives of Jackie Kennedy Onassis. Their lifestyle is unusual, to say the least and will definitely inspire you to clean your home once in a while.

As the movie indicates, Tonya Harding and her mother, LaVona Fay, aka "Sandy" Golden, didn't seem to have the best relationship and depicts Golden's allegedly abusive behavior toward Harding. "I was told my whole life, you're fat, you're ugly, you're never going to amount to be anything," Harding told CBS News back in 2008.

For her part, Golden has denied the abuse allegations, telling Inside Edition, "I gave her one swat at a competition because she was [fidgets her body around] this type of thing. And I was trying to do her hair and they were calling for her on the ice."

As you can see, there's plenty of mother-daughter storylines out there, guaranteed to raise a few eyebrows. So as you hunker down to watch My Mom's Darkest Secret on Friday, Dec. 20 at 8 p.m. ET, maybe give your mom an extra hug this weekend and be extra grateful this story is a far cry from reality.

More like this
The Plane Crash In 'Dear Edward' Is Based On A 2010 Tragedy
By Grace Wehniainen
Here’s What Happens To Bill & Frank In 'The Last Of Us' Video Game
By Brad Witter
Melanie Lynskey Plays A “Ruthless Leader” In 'The Last Of Us'
By Brad Witter
Pedro Pascal Barely Got Through The "Lisa From Temecula" 'SNL' Sketch
By Stephanie Topacio Long
Get Even More From Bustle — Sign Up For The Newsletter
From hair trends to relationship advice, our daily newsletter has everything you need to sound like a person who’s on TikTok, even if you aren’t.