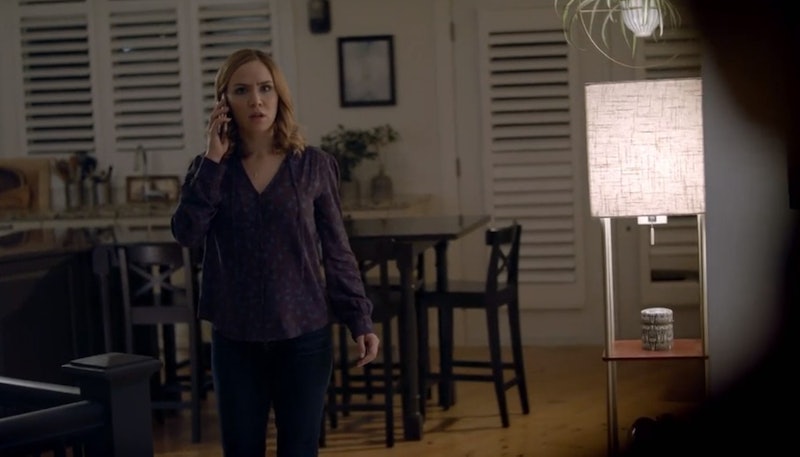 Dating has always been pretty complicated, but it can be especially tough for single moms. They worry about the right time to introduce a new partner to their kids and how to balance the constant busyness of mom life with trying to build a new relationship. And in the case of Lifetime movies, there's always the chance that a new someone special could turn out to be straight-up dangerous. The network's latest movie My Mother's Killer Boyfriend, thankfully isn't based on a true story, but it will definitely make you wary of your next date.

According to Lifetime's description, it follows a sweet single mom named Nicole who falls in love with Jonathan, a captivating and attractive professor. As she gets deeper into the relationship, however, Nicole starts to suspect that Jonathan might not be the widower he claims to be and starts to think he's lying to her — and even worse, that her life might be in danger.

The My Mother's Killer Boyfriend’s trailer shows how things start to unravel. It features Nicole talking to a friend about how Jonathan flew into a rage the previous night, and the scene cuts to him yelling at her while she stands nearby with a petrified look on her face. Nicole then finds an earring in their bedroom and eventually surmises that Jonathan has been sleeping with one of his college students.

Of course, Jonathan denies the affair (despite a clip of him rolling around in bed with a younger woman), but we then see him pushing the same woman off a boat and killing her. Jonathan continues his rage by running over an unidentified boy and throwing a glass vase at Nicole's head. Interestingly, there are no signs of Nicole's child in the trailer, which makes the title even more mysterious. The trailer ends with her friend saying that Jonathan has all the qualities of a narcissist, which seems like an understatement after watching him in action. The film will certainly explore more of his disturbing behavior and how Nicole manages to get away from him in the end.

Sadly, this story loosely mirrors several real-life incidents in which a relationship has taken a deadly turn. For example, in 2008, Sophie Kate Elliott was killed by her ex-boyfriend, former Otago University tutor Clayton Robert Weatherston, according to the NZ Herald. The outlet reports that Weatherston showed up at Elliott's home when she was preparing to move, locked her inside her bedroom, and stabbed her over 200 times with a knife and scissors. Weatherston admitted to attacking Elliott but claimed he was provoked. In 2009, he was convicted and sentenced to a minimum of 18 years in prison, according to another NZ Herald report.

It's not a direct recreation, but it's possible that My Mother's Killer Boyfriend took inspiration from some similarly tragic stories. See how it all unfolds, and if Nicole is able to take Jonathan down, when the movie airs April 26 at 8 p.m. ET on Lifetime.