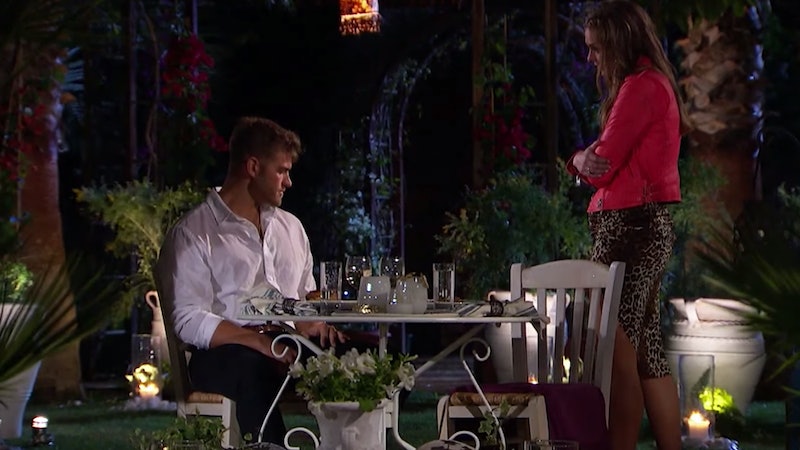 Spoilers ahead for The Bachelorette, season 15, episode 9.

While promos have been gearing us up for weeks to witness Luke P.'s demise on The Bachelorette, finally witnessing the confrontation last night was simultaneously satisfying and incredibly frustrating. What started with him uncomfortably asking about sex, quickly escalated to Luke telling Hannah that if she had sex with any of the other guys, he'd exit the situation. When he finally realized Hannah wasn't on the same page as him, Luke tried to back-pedal his comments, but Hannah called them out for what they were — sexist and unfairly judgmental. Though Hannah's response to Luke P.'s sex-shaming had Bachelor Nation giving her a standing ovation, his misogynistic judgment framed as Christian beliefs was also hard to watch. Did we expect as much from Luke P.? Yes. Was it still cringe-worthy to see him judge Hannah on the basis of her sexuality, holding her to his standard of the "perfect wife" without giving her any autonomy? Extremely.

Luckily, Hannah was having none of it. With her iconic proclamation of "I f*cked in a windmill," Hannah owned her choices as not mere "slip ups" from the righteous path Luke laid out for her, but conscious decisions to explore the physical aspects of her other relationships. As she told him repeatedly, she owed him nothing, especially when he was just trying to control her. To put it mildly, she handled the situation like a boss, and sent Luke home without any hesitation.

For many people, especially those who identify as women, experiencing sex-shaming from a partner is all too common. Sex-shaming often follows a person discovering that their partner has had sex before being with them, even if they themselves have had sex plenty of times. Other people might expect their partner to have a certain level of "experience," and shame them if they haven't. The kind of shaming we saw last night, though, is unfortunately very common, thanks to longstanding cultural notions about sexual "purity." But if you're ever caught in a situation similar to Hannah's, there are a few ways you can go about it.

According to Dr. Rachel Needle, a licensed psychologist, certified sex therapist and co-director of Modern Sex Therapy Institutes, which trains couples and sex therapists around the world, it's important to first recognize sex-shaming when it takes place. "Sex-shaming is used to make someone believe they are flawed and not worthy of acceptance based on their sexual choices or behaviors," Needle tells Bustle. "But our sexual choices and behavior should be ours alone as long as they are safe and among consensual adults."

Needle says that though outdated and often sexist ideas can lead to sex-shaming, there are still ways to confront the situation that can feel both comfortable and liberating. Here are nine ways to do just that, according to experts.