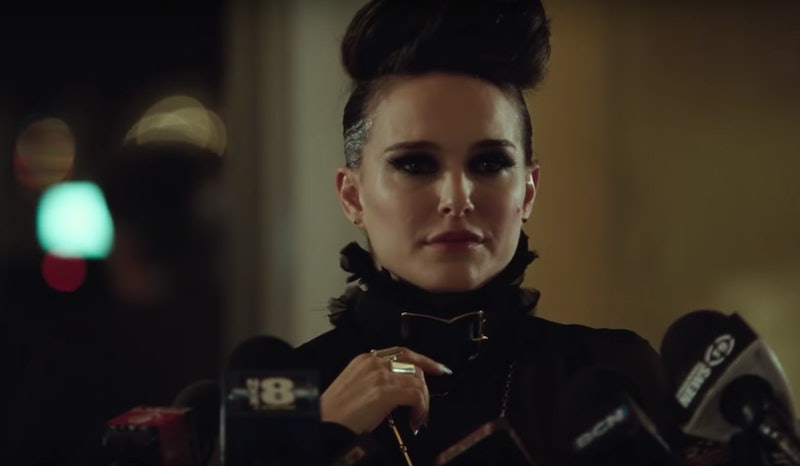 Vox Lux taps into two volatile turning points in the life of a singer-songwriter superstar: her post-fame emotional breakdown, and her formative beginning as she springs from the trauma of surviving a school shooting as a teenager. Vox Lux shows the attack, which is extremely disturbing. Though Celeste's association with it makes her famous in the film, out Dec. 7, New Brighton School isn't real.

While there is actually a New Brighton neighborhood in Long Island, where protagonist Celeste is from, the film's director and writer Brady Corbet explicitly said in a number of interviews that the events portrayed in the film weren't specific to real-life tragedies. Asked about the film's themes by Screen Daily, Corbet said he wanted to take a larger look at what we as a culture have been through in the last two decades. "When I think about what will define the early 21st Century, especially as an American, it’s Columbine, 9/11 and then following that, the global terror threat that has permeated every place I have lived, inside and outside of the US," he said.

He points out the overlap of American politics and the culture of celebrity worship with Celeste, who pens what will become her first hit song while a teenager recovering in the hospital. When audiences see her later in the film, as played by Natalie Portman, she's a burnt-out, raging star pushed to her limits and broken by a system that demands too much. There's almost no relation between the girl she was and the woman she's become, but both Celestes have been, and are, marked by ongoing trauma.

Corbet was just as clear that despite a few observations that Celeste's high-concept costumery is reminiscent of Lady Gaga's aesthetic, the diva isn't based on any one star personality. Corbet told Vulture, "The idea was that the character would be sort of an amalgamation of many, many, many, different real-life personages. There are certain character traits or parts of the story that evoke real-life people."

His hope was that by avoiding specificity to any real world events, the film's narrative and characters would feel more universal to an audience that has lived, and is still living, through incidents of horrible gun violence in spaces where we should feel safest. Personal events can speak to the public without being tied to history. In a press conference (via The Upcoming), Corbet opened up about his own ties to school shootings. "I grew up in Colorado so I was living there when Columbine happened. Yes it was a major event in my life, marking me psychologically. But I decided of course to not make [New Brighton] Columbine because I wasn’t interested in exploiting a tragedy that specifically. I kept it more generalized."

Keeping events intentionally ambiguous also means that viewers won't get bogged down comparing Vox Lux to any actual tragedy, thereby avoiding the trap of audiences brushing off their own potential culpability in the detachment of the world around them. Corbet summed up this particular theme speaking to Variety, where he emphasized, “I just think it’s important for everyone who sees this film to think about all we’ve been through and kind of own it. It’s not been a beautiful generation. We’ve been living through an obscene and absurd political system long before Donald Trump came to power.”