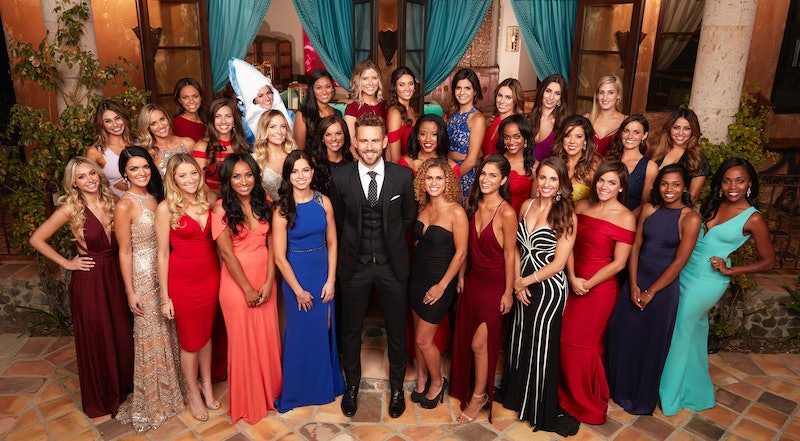 A new year means a new Bachelor and even though Nick Viall is not so new to The Bachelor franchise, Nick actually being the Bachelor is certainly different. Despite how unconventional it is for Nick to be the Bachelor, will Nick propose by the end of The Bachelor to keep with the traditional course of the series? Nick being named the Bachelor was anything but orthodox since it was announced while he was still courting Jen on Bachelor in Paradise and had been rejected by not one but two Bachelorettes. Yet, though the decision to make Nick the next Bachelor was exciting, the answers about what happens during Nick's season — and whether or not he is engaged — have been boringly standard.

While a simple Google search could reveal some juicy tidbits and possibly even answer if Nick is engaged after The Bachelor, I'm not about Reality Steve posts or any other spoilers that will ruin the ending for me because what's the fun in that?! Yet, when you remove those sources, engagement clues are hard to come by. Even Bachelor creator Mike Fleiss, who gave lots of details away about JoJo's season, hasn't given fans too much to work with for Nick's season. Although, Fleiss did post that Nick was crying "again" because #loveisworthit. Unfortunately, Bachelor Nation knows that tears do not prove an engagement has happened and are just an everyday symptom of being involved in The Bachelor.

Nick's Instagram and Twitter feeds also aren't giving us much dirt, but he did speak with People magazine about the new season. While he was super vague in the interview, Nick did reveal that he had "strong feelings for multiple women." Does that mean one of those women ended up with a ring?

You have to actively want to get engaged to be the Bachelor and Nick obviously isn't afraid of proposing since he almost got on one knee with Kaitlyn (if she hadn't stopped him) during his second time on The Bachelorette. And he confirmed his desire to get married to People.

"I've been willing! I just haven't been lucky enough to find that person," Nick said. "I've been ready for a long time. But I'm never going to force it."

Although Nick's time on the franchise has proven his willingness, his history with finales has been mixed in terms of whether or not he proposes. During his first season of The Bachelorette, he had said he was ready to propose to Andi, but she ended things with him before he was given the opportunity to pick out an engagement ring. Then, as mentioned, he was going to ask Kaitlyn, but she stopped him. And on Bachelor in Paradise, he chose not to propose to Jen. Because his Bachelor journey hasn't followed a clear pattern, it's hard to predict what he'll do on his own season of The Bachelor.

Yet, there was one tiny nugget of information from his People interview that might prove useful in analyzing his engagement status. He said, "I can say that I'm very thankful — and very happy."

For Nick to say he is very happy after his fourth time on the franchise makes me think he has to find love during his season — and actually, he already confirmed that he did to ET. And considering how he was ready to propose to Andi and Kaitlyn before (and even was engaged before he was on The Bachelorette), I am also thinking he will end up with a fiancée. If you're with me on this, then now is the time to start checking out the main contestants to watch for (Chris Harrison provided a list to Yahoo) since one of them could potentially become the next Mrs. Viall. Then be sure to watch Nick as The Bachelor when it premieres on Monday, Jan. 2 because his reality TV happiness has been a long time coming.