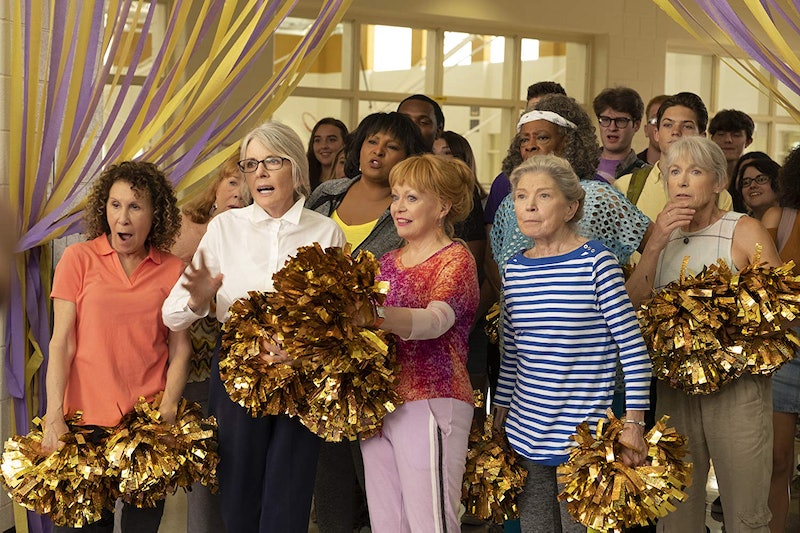 Premiering just in time for Mother's Day, the comedy Poms focuses on a group of women who decide to form a cheerleading squad at their retirement community. Hilarity, sisterhood, and shenanigans obviously ensue, but what makes it all better is that Poms is actually based on a true story.

The whole heartwarming adventure kicks off when Martha (Diane Keaton) moves into the Sun Springs retirement community with a bleak perspective on life. But then she meets Sheryl (Jacki Weaver) and tells her about her cheerleading past, and the two decide to relive the good old days, forming their own squad to cheer for their senior community. Once they get their group together, which also includes Pam Grier's Olive and Rhea Perlman's Alice, they decide to join a cheer dance competition. Despite what their competitors — and the rest of society — says about them, and with the help of their young choreographer played by 13 Reasons Why's Alisha Boe, they hope to give a performance of a lifetime, proving to everyone that age is just a number.

Written by Shane Atkinson, Poms is inspired by senior citizen squads like the Sun City Poms — a cheerleading squad from the Sun City Retirement home in Arizona, all of whose members are over 55 years old. The Poms were first formed back in the '70s, initially as part of the Sun City Saints women's softball team, per their website. Eventually, they became Arizona legends, performing at parades, conventions, sporting events, community meetings, fundraisers, and retirement living centers and care facilities.

And, yes, they can do all the tricks other cheerleading squads can do. "We do choreographed dance routines, we do acrobatics. We do pyramids, we do flying angels, we do splits. It takes a huge commitment," Sun City Poms Director Greta Paulsen told the BBC in an interview.

Pat Weber, the group's resident baton twirler and marching instructor, has a personal story that seems to closely resemble that of Keaton's character. Weber has been performing with her baton since her junior year in high school, after she had been diagnosed with polio. She tells BBC that it had become a form of therapy for her. In 2015, she was diagnosed with Stage 4 breast cancer. "Many of the gals have gone through some very trying circumstances," she said. "Hopefully, we help each other out."

Beyond being performers, they are also as a group fighting stigma and redefining what it means to be an "older" woman in today's society. Though the real-life Sun City Poms may not have joined a cheerleading competition to prove their point, they've still had a lot of success putting their community on the map and spreading their advocacy having been featured on shows like America's Got Talent, The TODAY Show, the BBC's "100 Women 2016" feature, and so many other news segments.

But not everybody finds the Poms plot inspiring. In an interview with Vulture, 67-year-old Anjelica Huston seemed to criticize the movie when asked about her role in John Wick: Chapter 3. "I'm looking for movies that impress me in some way, that aren't apologetically humble or humiliating like, 'Band of cheerleaders gets back together for one last hurrah,'" she said. "An old-lady cheerleader movie. I don't like that kind of thing. If I'm going to be an old lady — and I'm sort of touching old lady these days — at least I want to be a special old lady. I don’t want to be relegated to some has-been making a comeback. I hate comebacks."

Weaver responded to the apparent dig in an interview with Vanity Fair, saying, "I was kind of disappointed. I had always been an admirer of Anjelica. And I thought, 'That’s a bit mean and petty.' I would say she must be going through menopause, but she must have had that ages ago." She also talked about ageism as a real problem in both the film industry and society at large.

"A lot of it comes from the ages. People are people. Some of us got here sooner than others," she explained. "A lot of my close friends are in their thirties. Except for the creakiness in your bones, I don't think there is really that much difference between us when we really get to know each other."

The Poms ladies and the real-life cheerleaders who inspired them would certainly agree.

More like this
Twitter Is Identifying With Sally Field & Jane Fonda’s Friendship In New Viral Video
By Jake Viswanath
Gerard Butler Insisted On Adding This Pivotal Scene To 'Plane'
By Catharina Cheung
Jemima Khan Used Her Own Life As Inspo For 'What’s Love Got To Do With It?'
By Darshita Goyal
Alicia Silverstone Revives Her 'Clueless' Character In This Super Bowl Commercial
By Jake Viswanath
Get Even More From Bustle — Sign Up For The Newsletter
From hair trends to relationship advice, our daily newsletter has everything you need to sound like a person who’s on TikTok, even if you aren’t.