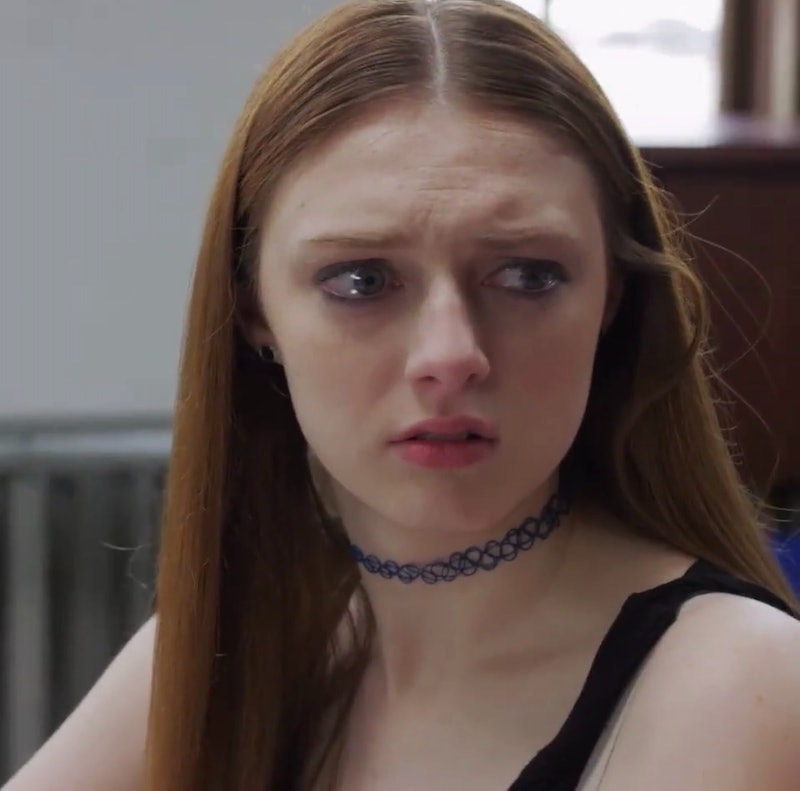 Friendships, particularly high school friendships, can be difficult to navigate. But they usually don't have deadly consequences. However, that appears to be the case for the girls at the center of Lifetime's latest "Shocktober" movie. While it's unclear if Lifetime's Psycho BFF is based on a specific true story of friendship gone wrong, the movie's premise is chilling exactly because it feels like it could happen.

According to Lifetime, the movie follows the friendship between Deandra and Olivia. Though they promise to be friends forever, the teens' relationship escalates into emotional abuse and they run away (judging by the cryptic flashes of violence in the trailer, we're guessing someone ends up dead). Unfortunately, the network hasn't shared a lot of information about the movie aside from the synopsis and the trailer, most likely to prevent spoilers. But Lifetime tends to advertise their movies as "ripped from the headlines features" if they are based on a true story, so given that this movie does not have that label, it probably doesn't follow the plot of as specific real-life incident.

Even so, it really isn't out of bounds to imagine that something like this has happened among high schoolers at some point in the past — look no further than the Slender man stabbing and the case of Michelle Carter, to name a few. Nevertheless, expect the Lifetime Movie Network to take the "typical" high school problems to another level of entertaining drama. This is especially true since Psycho BFF is a part of Lifetime's "Shocktober" movie lineup, which promises to make "all your screams come true."

And there are plenty of screams in the TV movie. In the trailer alone, Olivia makes it sound like a threat when she yells "'Best friends forever,' you said it!" at Deandra before pushing her while they walk on a bridge.

In another scene from the movie, Olivia tells Deandra, "With you, I feel like I could do anything," while she pulls out a gun. Clearly, there is no shortage of suspenseful drama in this one.

This isn't the first time that the network has showcased a story of friendship gone wrong. In fact, there's a marathon of movies focused on best friend problems on all day leading up to the Psycho BFF premiere on Oct. 17.

The day kicks off at 8 a.m. with I Killed My BFF, a story about two friends in a love triangle that goes south. That is followed at 10 a.m. with I Killed My BFF: The Preacher's Daughter, which focuses on a preacher's daughter who is convinced that her friend is the devil. Later in the day, at 2 p.m., the movie Her Best Friend's Husband is on, which is about a woman who tries to help her friend save her marriage, except she falls in love with her friend's husband. Right after that, at 4 p.m., is Best Friend's Betrayal, in which a woman's obsession with a close friend turns deadly. At 6p.m., a woman finds out about her friend's dark side in The Wrong Friend. Friendship can certainly be scary!

It all leads to the main event: Psycho BFF, in which, chances are, you shouldn't trust anyone to be your BFF. But we won't know for absolute sure if this friendship has gone truly sour until it airs at 8 p.m.

More like this
Gerard Butler Insisted On Adding This Pivotal Scene To 'Plane'
By Catharina Cheung
Jemima Khan Used Her Own Life As Inspo For 'What’s Love Got To Do With It?'
By Darshita Goyal
Your Guide To Watching 'Everything Everywhere All At Once' In The UK
By El Hunt and Sophie McEvoy
Bill & Frank’s 'The Last Of Us' Episode Has Twitter Emotionally Wrecked
By Alyssa Lapid
Get Even More From Bustle — Sign Up For The Newsletter
From hair trends to relationship advice, our daily newsletter has everything you need to sound like a person who’s on TikTok, even if you aren’t.