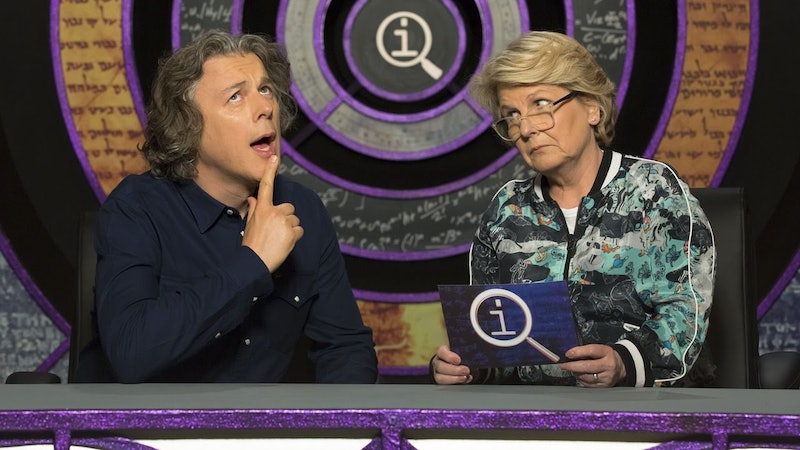 Comedy panel shows have always been an absolute joy in terms of light entertainment. Like, is there anything more easy viewing than a load of comedians having a chat about both stuff and things? Add into that a bit of a quiz so you can shout at the television and Bob's your uncle, Fanny's your aunt. If you are a curious type, you may wish to unpick phrases like that. Which is the sort of thing that happens on QI. And when you watch the quick witted rounds you may well wonder, is QI scripted?

I contacted Talkback productions about this and will let you know as soon as I hear back. But according to past interviews from stars on the show, it looks like pretty much all of it is improvised. However, they do see the questions ahead of the show. Which seems entirely fair considering that the questions on the show are so redonkulously hard.

Speaking to the Radio Times back in 2013, Alan Davies, a resident panellist on the show, spoke about the pre-show situation. Sharing that, TBH, getting the questions doesn't actually give you that much of a leg up because they are so bloody hard. He said: "On QI, you get the questions, but they're incomprehensible!"

The hit show has been on telly for quite some time. Since 2003 in fact. Initially it was hosted by the great Stephen Fry. Fry left in 2016 owing to budgetary constraints. Davies spoke to the Daily Mail about the reasoning behind his departure:

"For budget reasons, they ended up making him do three shows in 24 hours. Sometimes he'd go upstairs and have a vodka and tonic and a lie down, then come back and say, 'I don't want to do this.' I sympathise, because I felt exactly the same way. It's not fair."

Although Fry's departure was sad for many fans, a whole new dawn of entertainment came when the hilarious Sandi Toksvig took the helm. The fact that she even had time to film the show what with other commitments like The Great British Bake Off is impressive. The legendary broadcaster took over like the true pro she is and proved herself to be the ideal replacement. However, seemingly producers didn't see this as reason enough to pay her the same.

The BBC reports that speaking at a conference for The Women's Equality Party (WEP) which she co-founded with Catherine Mayer. The WEP campaigns for women to have the same rights and opportunities as men. Toksvig was emphatic that she feels lucky to be in such a successful position and doesn't want to make gender pay gap issues about her, but the facts are the facts. As she explained:

"I have recently discovered I get 40 percent of what Stephen used to get. And I get the same pay as (permanent panellist) Alan Davies, who is not the host. I temper this with the fact that I love the show and I'm the first woman to host such a show. I love QI and the brilliant team who produce it. John Lloyd and the (production) team champion women on the show."