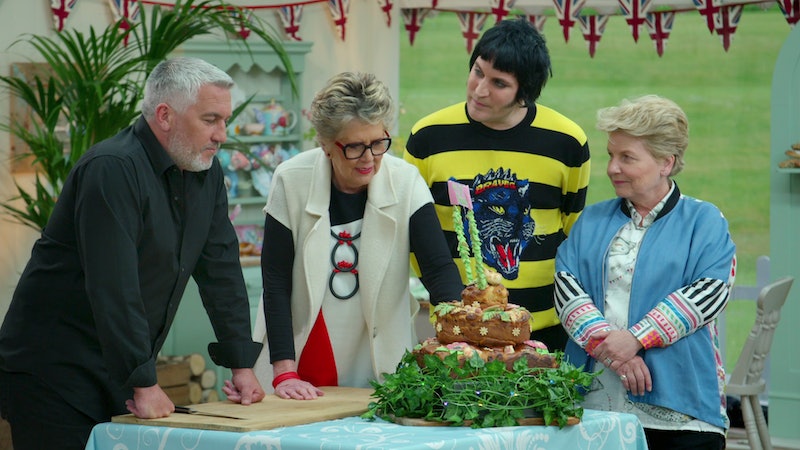 On your mark, get set — kiss the bride! On Sunday, April 7, several Great British Baking Show contestants reunited to celebrate Martha Collison's wedding, and in true baking show fashion, all of the bakers brought their own cakes to toast the bride with.

Collison — who earned fans on both sides of the Atlantic when she competed on the 2014 season of the show at age 17, which can be viewed on Netflix as Collection 1 — tied the knot with her longtime boyfriend, Michael Haywood in a sweet, countryside ceremony, surrounded by her fellow bakers. And in keeping with the spirit of the lovely, friendship-focused show, all of the former contestants in attendance each brought their own wedding cake for Collison and the guests to enjoy — even Iain Watters and Diana Beard, who made headlines during the show's run due to their "Bin-Gate" controversy.

"What a day!" Chetna Makan, who placed fourth in the 2014 season, wrote on Instagram alongside a slideshow of photos from the wedding. "Having known @marthacollison since she was 17, watching her get married to @mbhaywood27 yesterday was just most lovely and beautiful and even more special since we had the whole bake-off family there to celebrate! Also an honour to make her cake with all the other bakers, love each and everyone one of them!"

That year's winner, Nancy Birtwhistle, shared some snaps of her own from the big day on social media, which she described as "amazing" on Instagram. "My baker pals come together for beautiful Martha's Wedding Day," Birtwhisle wrote alongside one sweet group photo, noting in a second post that Luis Troyano and Norman Calder were "missed" at the festivities. Though The Great British Baking Show has had its share of scandals over its nearly decade-long run, the competition has become known for fostering genuine friendships among the contestants, and for being a kind, comforting show about the joys of baking.

"I’m very humbled by the amount of people who message me saying they’ve watched it in various locations across the States, and how much they like seeing something where everyone is so lovely to each other and everyone is very caring," Collison told the A.V. Club in April 2017 about Baking Show's runaway popularity. "It’s very true to how the program is. I never once felt like it was competition."

The newly-married baker also told the outlet that she's surprised so many people have become enamored with a show that doesn't have a traditional prize for the winner. "People are also surprised there really isn't a prize. There isn't a cash prize. Really, you only get a little cake stand if you win," Collison explained. "But it’s a big deal in the U.K. When I was on it, the finale of our series had more views than the final of the World Cup. The fact that it's just people baking cake, it's a bit crazy that it has gathered such a following. It just captures the diversity of Britain, and everyone can relate to it some way or another."

Still, the experience of being in the Baking Show tent wasn't all bonding and baking: Collison also explained that being under the watchful eye of judge Paul Hollywood was even scarier in real life than it is on the show. "That is definitely the most intimidating part. He can always go two ways," Collison told the A.V. Club. "He does the stare, and then he’ll either go, 'That’s the best thing I’ve ever tasted' or 'That is disgusting.' And you just don’t know which way he’ll go."

"I had one of each," she recounted to the outlet. "There’s this thing he does as well where he takes his finger and he prods into a bread or a cake to see if it’s baked properly. And that’s another intimidating thing. [Former judge Mary Berry] was different. She’d come along, give you a little wink and a nod."

While The Great British Baking Show may have undergone some major changes since Collison appeared on the 2014 season, it's clear that the bonds that the contestants formed in the tent will last forever. If that doesn't make rewatching old seasons of the show even more comforting, we don't know what will.