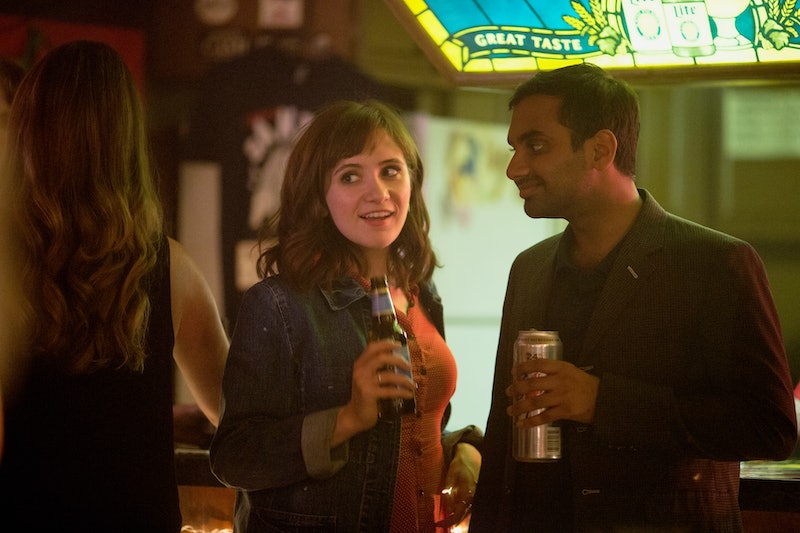 SPOILERS AHEAD FOR MASTER OF NONE SEASON 2. While Aziz Ansari is undeniably the star of Master Of None, a large part of Season 1 was anchored by Noël Wells' performance as his love interest Rachel. The end of the season made it pretty clear that things between Rachel and Dev were done for good, and Rachel's reduced role in Season 2 of Master Of None reflects the physical and emotional distance that has grown between the two former lovers.

Dev's growth from Season 1 to Season 2 of Master Of None has shown the actor and pasta enthusiast becoming more confident and principled, while still falling into some of his old pitfalls. The beginning moments of Season 2 show Dev biking through an Italian village before receiving a self-proclaimed "awkward birthday message from your ex-GF!" While the Dev of Season 1 may have received a message like this and immediately replied with an emotionally wrought message with the hopes of maybe re-finding a lost spark, he simply closes it and allows himself time to think about it.

Master of None has never shied away from showing the brutal reality of relationships alongside the blissful highs. In the aftermath of Dev's relationship with Rachel, the show also isn't afraid to point out the reality of a difficult breakup. While most television shows may keep a character around even after a major break-up, Rachel's appearances in Season 2 are pretty much limited to screens and text. In Dev's world in Season 2, Rachel isn't even a person any more — simply an idea of a relationship he once had that manifests itself occasionally in birthday e-mails.

While many breakups are undeniably good in the long-run, there's nothing more difficult than two people who care about each other, who maybe even love each other, who just can't find a way to make a relationship work. While in another world Rachel and Dev may have been good friends, the pain from the breakup is too much that Dev sees the easiest option to be to simply keep out of each other's lives.

They keep out, that is, until they come crashing into each other's lives briefly at the end of the season. After a whirlwind of a day that involves getting accosted on-air by Raven-Symoné for hosting a cooking show alongside a serial sexual harasser, likely losing his tv show due to his co-host, and being forced to end his affair with Francesca, Dev runs into Rachel on the streets of New York.

She asks how he's doing, and, although in the past he likely would've relied on her for emotional support and been more than willing to share what's going on in his life, all that Dev can muster is a half-hearted "things are good." It's the ultimate insult on top of misery.

Rachel also responds that "things are good." It's clear that things aren't good for Dev, but there's no way to know that Rachel didn't also just have the worst day of her life. Master of None has no qualms about being an emotionally gutting show, but there may be no sadder, or more true-to-life, sight than seeing two people who used to love and care for each other who, on what may be the worst day of their lives, can only muster the phrase "things are good" to talk to each other. And, it's in these painfully real moments that Master of None truly excels by telling it like it is.