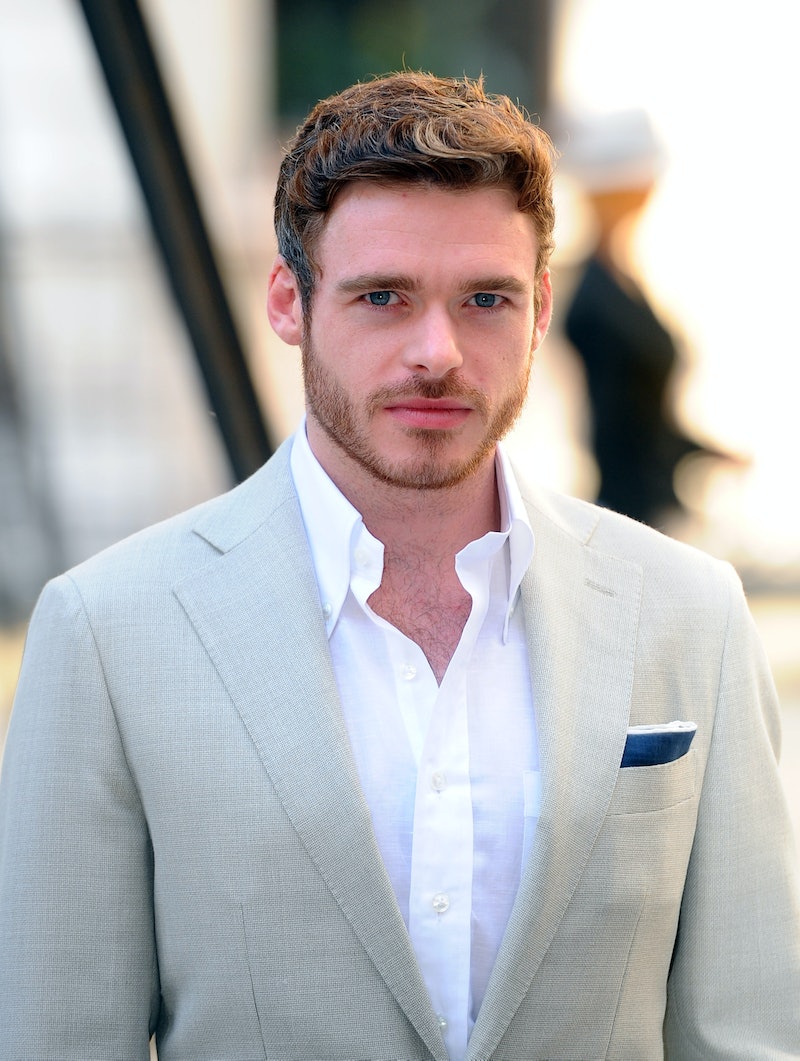 Though he's been linked to a number of fellow celebrities over the years, it appears that right now, Richard Madden isn't dating anyone. The Rocketman star was most recently rumored to be seeing 13 Reasons Why actor Brandon Flynn after the two were photographed spending time together last spring. However, neither have confirmed they're in a relationship, and they don't seem to have been spotted together in several months despite reports that they were living together.

"I just keep my personal life personal," Madden told the New York Times when asked directly about Flynn in May. "I've never talked about my relationships."

Prior to that, Madden was dating Ellie Bamber, a fellow actor who had her first big break in Pride and Prejudice and also starred alongside Jake Gyllenhaal in Nocturnal Animals. The pair were first linked to each other in August 2017, when pictures of them kissing at Jonas Blue's birthday party in Ibiza were published by the Daily Mail. They reportedly split a little over year later, in January 2019, a few months before rumors began circulating about Madden and Flynn.

Madden was also linked to Suki Waterhouse in 2016, though that relationship was never confirmed either. In fact, perhaps the only relationship Madden has spoken publicly about is his 2012 to 2015 romance with Jenna Coleman. During their relationship, the pair were practically inseparable, both starting out as relatively fresh faces to the business and becoming the in-demand actors they are today. It was while they were together that Madden landed his role as Robb Stark on Game of Thrones and Coleman began playing Clara on Doctor Who — a particular treat for Madden, who was a longtime fan of the show and enjoyed the behind-the-scenes access being with Coleman afforded him.

"I've watched Doctor Who since I was a kid. I loved it, and I still love it. I can geek out about it, like when I go to set and see the TARDIS," he told Vulture in 2015. "I was selfie-ing the sh*t out of it, and sending it to my dad! "Look, it's me in the TARDIS!' I thought it was the coolest thing ever."

Ultimately, though, it didn't work out between the two. "They will always be friends and have been through a lot together. When they first dated they were both jobbing actors, now they are global stars," a source told The Mirror after their split.

Since then, Madden has maintained a pretty private personal life. He's even picked up a few habits in order to avoid letting the paparazzi publish photos of him. "I wear the same clothes days in a row, because if it looks like the same day, they can't run the pictures," he told the New York Times in the aforementioned interview. "There's only so many photos you can have of me with a green juice walking down the street."

So if Madden does happen to be dating anyone currently, it's unlikely he'll share anything about it — not talking about his relationships seems to be the man's one constant.

This article was originally published on Aug. 8, 2018