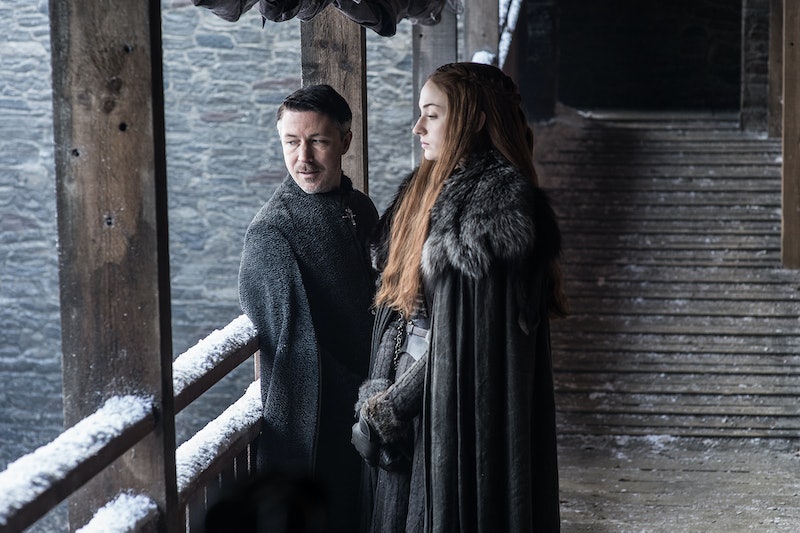 Creating theories and predictions about the future of the story has practically become an international pastime for Thrones fans — some of which have more compelling evidence than others. But the theory that Sansa is becoming Cersei on Game Of Thrones pulls its evidence from the most surprising place of all: hairdos.

The topic of Cersei Lannister came up explicitly in Sansa's conversations with Jon Snow, when the Lady of Winterfell warned the King in the North against forgetting the threat from the South while being preoccupied with the threat from the North. "You're the military man, but I know her," she told him. "If you're her enemy, she'll never stop until she's destroyed you. Everyone who's ever crossed her she's found a way to murder." When Jon told his half-sister (correction: cousin) that it sounded like Sansa admired Cersei, Sansa admitted that, "I learned a great deal from her."

But more implicit connections were also drawn between the two characters who used to share so much screen time when the young Stark girl was engaged to the Lannister queen's son, Joffrey. Back then, Cersei was both Sansa's torturer and a grim prediction of what her future might look if she didn't escape King's Landing. Although it seemed for a time like Sansa might evade that future, the show is now providing a nearly subconscious warning that she may be turning into Cersei after all.

Some eagle-eyed viewers noticed a similarity between Sansa's hairstyle in the Season 7 premiere and Cersei's former favorite hairstyle, pre-Walk of Atonement, and posted their findings on Twitter. The comparison is striking: just like the woman she "learned a great deal from," Sansa is now wearing her hair in two small braids that encircle the top of her head like a crown, with the rest of her locks framing her face in long, wavy sheets. On a show where every design detail is so meticulous, this can't be a coincidence.

Surely this comparison doesn't bode well for Sansa. While Cersei is a fascinatingly complex character who has had her fair share of sympathetic moments, on the whole she's a spiteful, power-hungry person who has never shied away from murder — but recently became someone capable of blowing up hundreds of innocent bystanders in pursuit of eliminating her enemies. But while Sansa surely has a ways to go until she reaches such a drastic point, there's no ignoring the fact that she may very well be on the same path.

Sansa and Cersei have a shocking amount in common. They both grew up dreaming about the handsome prince they'd marry some day (Rhaegar for Cersei, Joffrey for Sansa), only to forced by men into marriages they didn't want (Robert for Cersei, Tyrion and Ramsay for Sansa). They both wound up suffering countless emotional and sexual abuses at the hands of those men before they murdered them — both with the help of animals, no less (a boar for Robert and a pack of starving hounds for Ramsay).

Sansa's satisfied smile as she listened to Ramsay getting torn apart has shades of Cersei's smirk as she watched the Sept of Baelor burn. Sure, the scale of those atrocities is very different… but there's no denying that Sansa has found herself on a slippery slope in which vengeance starts to look a lot like justice. In the Season 7 premiere, she advocates taking castles away from children as punishment for their fathers' misdeeds. What will she consider doing next in her relentless quest to eliminate those who have done and would do harm to the Starks?

There have been two primary differences between Sansa and Cersei for much of the series. For one, viewers got to know Sansa at a young and naïve age, allowing them to sympathize with her, whereas Cersei was already at a much more developed — and embittered — stage of her development when she was introduced. Secondly, Cersei's enemies tend to be people the audience likes (namely her brother Tyrion and the Tyrell family), whereas Sansa's are people the audience despises (Joffrey and the Boltons).

But now that Sansa's reached a more advanced stage of her own development, it's easier to draw more direct comparisons between her and Cersei… and not just between their choice of hairstyles. And if she should suddenly start targeting enemies the audience does care for — namely children, noble Northern houses, and her own cousin Jon Snow — then viewers may begin to see the young Stark woman in a new, less flattering light.

Sansa wasn't wrong when she told Jon that Ned and Robb had made stupid, honorable mistakes that brought about their own downfalls. But she should be careful of overcorrecting in the other direction, lest she wind up looking in the mirror someday soon only to see Cersei Lannister staring back at her.

More like this
Does 'Locke & Key’s Ending Mean There Could Be A Season 4?
By Sophia Moore
Netflix Just Rebooted A Classic ‘90s High School Drama
By Maxine Harrison
Everything To Know About 'RHOC' Season 17
By Brad Witter and Sophia Moore
An Ultimate Guide To The Music Of 'Rap Sh!t'
By Brad Witter
Get Even More From Bustle — Sign Up For The Newsletter